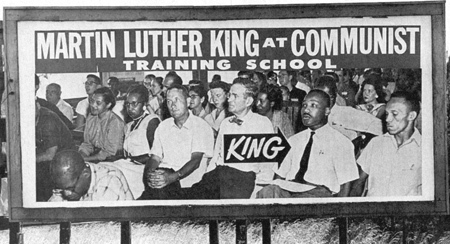 Black History Month, previously known as "February," hasn't even begun yet, and already the Public Broadcasting System is treating the nation to propaganda fests about the Emmett Till case of 1954 and the anti-black "hate crime" in Jasper, Texas of 1998. Martin Luther King Day, just concluded, was merely a walk-up to what will be a month-long wallow in white guilt and anti-white hatred.

One icon of the "civil rights movement" who will be featured is Rosa Parks, the little old black lady of Montgomery, Alabama, whose quiet and heroic refusal to give up her seat and move to the back of the bus has become to civil rights mythology what George Washington and the cherry tree was to the Old America.

As it turns out, neither myth is true, but the facts in the Rosa Parks case are a good bit more sinister.

A book published in 1995, "Speak Now against the Day," by John Egerton informs us that Mrs. Parks, so far from being a simple black woman, was in fact an officer of the local NAACP.

If that suggests that she mounted a rather more artful act of civil disobedience than the legend acknowledges, it's because such is precisely the case.

Mr. Egerton shows that Mrs. Parks was in fact an alumna of an institution in Monteagle, Tennessee, known as the Highlander Folk School, usually and not inaccurately described as a "communist training school." Highlander was founded and run by a gentleman named Myles Horton, who was never actually a member of the Communist Party but told a veteran Red pal that he didn't join so he could avoid having the label pinned on him. For all practical purposes, Horton was a communist.

As Mr. Egerton writes, "Highlander had started summer workshops on school desegregation in 1954, right after the Brown decision. The Montgomery NAACP wanted to send a delegate to Highlander the next year. They chose their youth director, Rosa Parks."

Mr. Egerton's book contains a photograph of Mrs. Parks with Horton at the school in 1957, but her first training session took place only a few months before she sat down in the front of the bus in December, 1955.

Her action is widely and probably rightly regarded as the beginning of the civil rights movement in the South. Was it in fact an act of communist subversion?

In 1957 a photograph was taken of an audience at the school that showed Martin Luther King sitting in the front row. Right next to him was a comrade named Abner Berry, the correspondent of the Communist Party's official newspaper, the Daily Worker. In the 1950s King's enemies plastered it all over the South to discredit King and his movement. It did discredit them—at least in those quarters that thought hanging out with Communists was discreditable.

Today, fewer people think so, and the discovery, from opened Soviet archives, that communists really did penetrate high levels of the U.S. government and the atom bomb project, falls on ears that don't want to hear about it. But it's also clear that they penetrated—and used—the civil rights movement as well.

It's well documented that King himself was surrounded by known communists like Stanley Levison and Hunter Pitts O'Dell, the latter actually a member of the party's national committee in 1961. King's bitterly anti-American speech on the Vietnam war, praising Ho Chi Minh and comparing American soldiers to Nazi storm troopers, in 1967 was written by Levison, whose influence on King was the main reason for FBI surveillance of him.

Today, Americans have been so brainwashed by the propaganda of the left, communist or not, that they're likely to regard the Reds in the civil rights movement as the real heroes who led the fight against murderous bigots in Southern backwaters. Immersed in white guilt, a vast number of Americans now accept that the entire history of their nation up to the 1960s was a dark age of repression and hatred, with only a few bright spots like Abraham Lincoln and the crusade against Hitler.

Having lost their own history, Americans can no longer expect to keep the nation their history created and defined. That, of course, was the whole point—to strip away the real past as well as the legends that allow Americans to exist as a people and to put in their place new myths—and a new population—that will give birth to a new order that Myles Horton and his comrades would have liked. It's an amazing story, about how an entire people was bamboozled out of its own heritage and its own country. Some day, when we have a good conservative administration in Washington, the Public Broadcasting System ought to make a film about it.