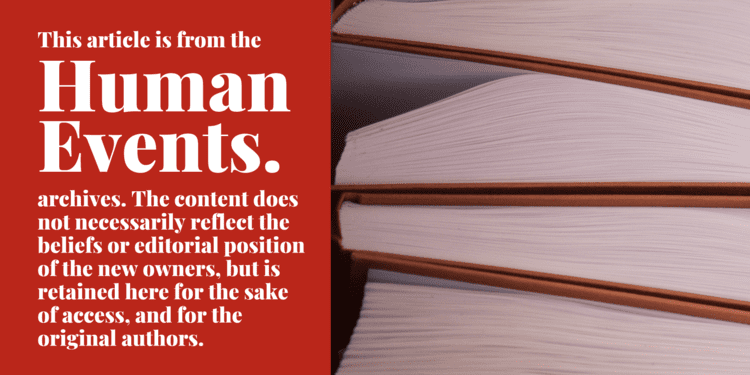 After Raheem Kassam: Is The New/ Improved HUMAN EVENTS Doomed To Fail?

The image above is seen on many pre-Current Year Human Events articles...including one celebrating Ronald Reagan's centenary.

I was already dubious about the relaunch of Human Events, and the abrupt elimination of Global Editor In Chief Raheem Kassam by publisher/backer (and now Editor In Chief) Will Chamberlain (Human Events Says Sayonara To Raheem Kassam, Daily Caller, August 8, 2019) makes me think it’s going to be just another Alt-Lite gatekeeper—in which case it is doomed to fail.

Last year, I wrote an article for VDARE about the magazines and newsletters I read as a young stripling conservative in the pre-Internet days (mid-1990s). One of the publications certainly not on this list was the D.C.-based tabloid Human Events. I was familiar with the outlet and occasionally flipped through it at my local library. It was depressingly boring and full of boilerplate about tax cuts, balanced budgets, military spending and internal GOP politics. Why did it have such a solid reputation on the Right? Who would pay to read such things?

I would later discover that, while it was never all that great, it was at one point a fairly conservative magazine on racial and cultural issues.

Human Events was founded in 1944 by conservative writer Felix Morley. It started out with a focus on foreign policy but would later take a conservative/libertarian direction on economics and social issues when Frank Chodorov took over as editor in 1951. Through the years, the publication featured prominent contributors such as Murray Rothbard, Pat Buchanan, Phyllis Schlafly and Ann Coulter. Ronald Reagan was a subscriber and called Human Events his “favorite reading for years.” Despite these big names, the publication never reached over 40,000 subscribers.

And by the mid-1990s, all racially tinged issues were off the table. Former Human Events Managing Editor Kevin Lamb explained why in a 2005 article for VDARE.com.

This betrays the modern mindset of the Human Events editors: Focus exclusively on "energy policy" wonkery and avoid the notorious lawlessness that flourished in New Orleans—murder, rapes, assaults, pillaging and looting—because that might mean mentioning its racial component.

As the former managing editor of Human Events, I can recall several instances in editorial meetings and private discussions in which race was simmering just below the surface—whether crime rates in the nation's capital, immigration, or educational disparities in student achievement. When the conversation became increasingly awkward, one of the other top editors would caution: "I suppose we shouldn't discuss that." Then they would quickly move on to a safer subject.

Lamb was fired after three years at the publication when the Southern Poverty Law Center called Human Events editors and asked about his work with The Occidental Quarterly, a dissident academic journal. Editor Thomas S. Winter fired Lamb the same day.

How could a supposedly “staunch conservative outlet” fold so quickly to a far-left pressure group? Lamb writes that the then-editors and owners of Human Events were typical cases of Reagan revolutionaries degenerating into Conservatism Inc.—going native inside the Beltway and growing terrified of being called racists. But this was not always the case:

It is true that over the years Human Events was careful in confronting the race issue. It never was explicitly a racial publication and it would be inappropriate to characterize it as such. But by the same token, it was never a champion of radical egalitarian social policies. It routinely opposed forced busing, Head Start, affirmative action, and aggressively exposed the Communist influence within the civil rights movement. The paper's editors tacitly understood that grassroots cultural conservatives, such as Birchers and members of the Southern Citizen's Council, formed a considerable core of Human Events' readership base. The paper unapologetically looked up to prominent conservative public officials—including former segregationists such as Strom Thurmond—without being explicitly racial in outlook.

But by the 1990s things had completely changed. In one pathetic instance described by Lamb, Winter fretted about being called a “racist” if Human Events ran a positive mention of The Bell Curve. In short, conservatism had long since ceded racial issues to the left. Lamb concluded:

For many Beltway "conservatives," attending events like the [G. W. Bush] White House Christmas Party is the pinnacle of achievement. Everything else is secondary. Anything that jeopardizes this social standing is beyond the pale. Status is the fuel that drives the Conservative Establishment.

Apparently, the Human Events former readership agreed. The publication shuttered in 2013 (though it kept a seldom updated web presence). [How the Chips Fell At Human Events, by Eddie Scarry, Adweek, February 27, 2013] It seemed destined to become a footnote in the history of American conservatism as an example of what happens to “conservative” outlets that can’t or won’t stand up to the left.

But in May 2019, there was an unlikely revival of Human Events under new ownership. And Editor Raheem Kassam seemed to give the new Human Events a promising start.

Born in London to Muslim immigrants, Kassam, 32, at first seems an unlikely member of the Dissident Right. But he has published a book defending Enoch Powell, Enoch Was Right: 'Rivers of Blood' 50 Years On (2018), and another on the reality of Muslim no-go zones throughout Europe, No Go Zones: How Sharia Law Is Coming to a Neighborhood Near You (2017). Would the Human Events editors who fired Kevin Lamb ever have written such things?

The articles on the new Human Events were strongly of the Alt-Lite variety, but they were at least on the right side of immigration and related cultural issues.

But Human Events doesn’t seem to have run Ann Coulter’s always-solid syndicated columns since February 20. It’s not clear whether this is because she’s un-PC, or too hard on Trump. The last column that ran was headed "Trump’s Failing. Don’t Ask Me to Lie About It."

Kassam’s Twitter feed was a bit stronger in taking on Leftist buffoonery. But all these Tweets seem to have been deleted—we retrieved them via a combination of Google’s cache and archive.is. 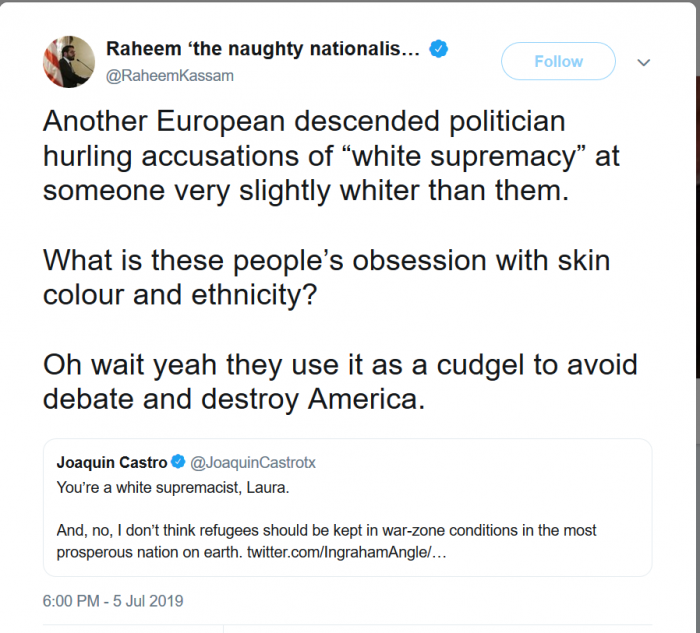 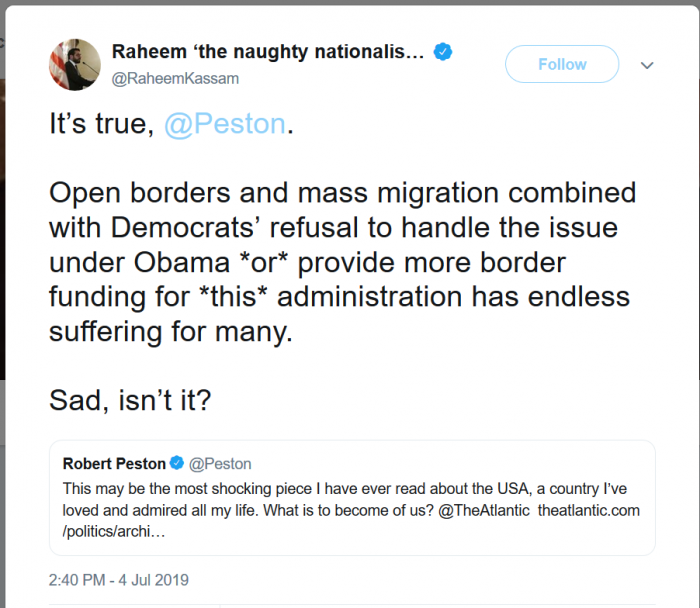 Unfortunately, Kassam’s tenure at Human Events ended on August 8. An insider tells me that he was fired by Chamberlain for wanting to take a more adversarial stance against the Left on cultural issues. The issue that apparently was the last straw: criticism of transsexuals.

The new Human Events is part of a recent trend of conservative operatives copying what Donald Trump did successfully in 2015-16: gravitating toward nationalism and a harder line against Leftism on issues such as immigration, multiculturalism and Political Correctness. But if Kassam was fired in less than three months for criticizing transsexuals, this is a major red flag. Is Will Chamberlain any different from the cowardly editors who fired Kevin Lamb 14 years ago?

Similarly, the Edmund Burke Foundation, which calls itself “a public affairs institute dedicated to developing a revitalized conservatism for the age of nationalism already upon us,” recently held a “National Conservatism Conference” in Washington, DC. But organizer Yoram Hazony disinvited VDARE.com Editor Peter Brimelow and denied American Renaissance Editor Jared Taylor a press pass. (Both websites snuck in moles, see here and here.)

Interestingly, Human Events did not cover Hazony’s conference, though Kassam was in attendance and tweeted about it: 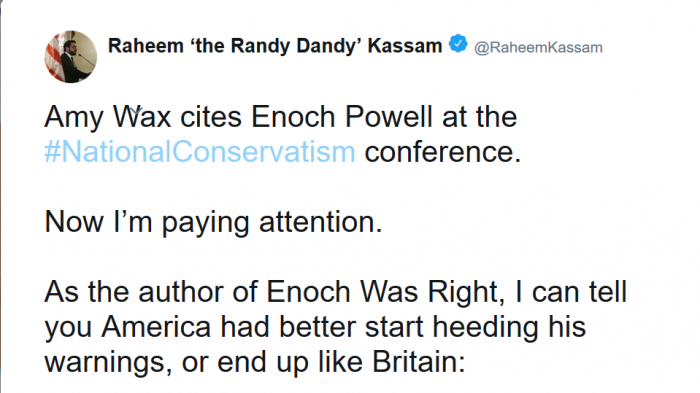 Thus the issues that helped defeat Conservatism Inc. and elect Trump are being co-opted by new gatekeepers for the Respectable Right.

Will the new Human Events turn out to be another Hazony-type scam? Or will it continue to publish open defenders of Enoch Powell and attack the Left on nationalist issues that increasingly define American politics? Would it publish an article from Jared Taylor (Peter Brimelow says he’s too busy)?

The original Human Events died because it would not defend the Historic American Nation for fear of being called “racist.” National Review seems on its last legs for similar reasons. For conservatism to have a future, it needs to move in a more nationalist direction. But this will only invite more attacks from the Left. Will the new Human Events withstand these attacks—or will it fold like the old Human Events?