Alt Right vs. Reverend Wright—TIME's Guilt-By-Association Smear Of Trump Is Why Americans Hate The MSM 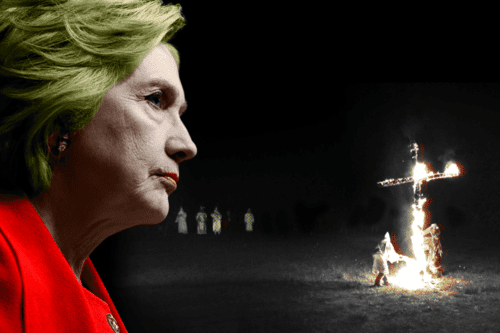 The Grand Dragon of the Ku Klux Klan has endorsed one of the presumptive nominees for President. No, it’s not David Duke endorsing Trump. Duke has not been involved in whatever is left of the Klan for over 35 years, not that he's gotten any credit for it. Rather Will Quigg, California Grand Dragon for the Loyal White Knights has endorsed Hillary Clinton and claimed his organization has funneled $20,000 in anonymous donations to her campaign.

Citing her friendship with the late Robert Byrd, Mr. Quigg said: “She is friends with the Klan. A lot of people don’t realize that.” Weirdly echoing the cuckservative "Dems-Are-The-Real Racists" meme, Mr. Quigg claimed: “All the stuff she’s saying now, she’s saying so she can get into office, OK?” He went on: “She doesn’t care about illegal immigrants—she’s acting like she does so she can get into office. Once she’s in office, then she’ll implement her policies. She’s a Democrat. The Klan has always been a Democratic organization” [Ku Klux Klan Claims $20K In Clinton Donations, James King, Vocativ, April 25, 2016]

The Main Stream Media, in its role of Leftist Narrative Enforcer, has been skeptical. According to the Atlantic:

This is fairly obviously B.S. The Clinton campaign denies it has received nearly that much money in anonymous funds, and the Vocativ reporter even noted that he factchecked and verified the campaign's claim using F.E.C. filings. But hey! A Klansman said the name "Hillary Clinton" with a gleeful smile on his face, so take that for what it's worth, which is probably roughly nothing.

[Live Coverage of the Northeastern Primaries, by Emma Green, April 26, 2016]

But needless to say the MSM does not display such judiciousness when addressing alleged racist ties to the Trump campaign. A recent case in point, Time Magazine’s hit piece on the Alt Right and Trump, The Billionaire and the Bigots (by Alex Altman, April 14, 2016), is worth dissecting in detail. (The full Time article  is behind a paywall—Radix excerpted it here. ) 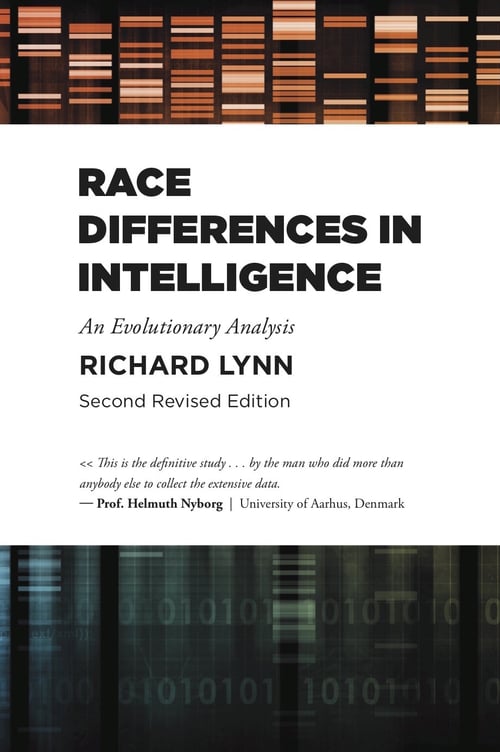 The Alt Right is a new movement, but Altman’s tactics in attacking it were tired boilerplate, little more than Pointing-and-Sputtering and guilt-by-association. He began by expressing shock at the National Policy Institute’s output:

Altman  [send him mail] failed to note that the “pseudoscientific tract” is by Richard Lynn, a professor emeritus at the University of Ulster who was educated at Cambridge. While Lynn’s work is controversial (in the sense that anyone who questions egalitarianism is “controversial”), many of the top peer-reviewed science and psychology journals have published him and he is well regarded within the field.  If he is truly a pseudoscientist for writing about ethnic differences in intelligence, one must wonder why Time Magazine had no problem reporting back in 2001 that

…a report by British Psychologist Richard Lynn published in May 1982 indicated that over the past generation Japan's mean national IQ score has risen 7 points to an average of 111, well above the American norm of 100.

I can only assume that Altman decided to point-n-sputter at the Radix article “My Hate Group is Different than Your Hate Group” [By Gregory Hood, March 30, 2016] in order to imply that the Alt Right freely admits they are all members of “Hate Groups.” But the headline was actually sarcastically imputed to Ted Cruz—noting that many of his prominent supporters are involved with groups that the Southern Poverty Law Center ($PLC to VDARE.com) has, in its recent expansive mode, designated “Hate Groups”: neocon Frank Gaffney’s Center For Security Policy, SPLC-designated “anti-Muslim;” Bryan Fischer’s American Family Association, SPLC-designated “Anti-LGBT.”)

To give the devil his due, Altman described the Alt Right’s ideology, more or less, accurately noting

They regard most Republican politicians as Zionist puppets, captive to corporations seeking cheap labor. They tend to be protectionist on trade, isolationist on foreign policy and unmoved by cornerstone conservative issues like free markets or the Constitution. They reject the benefits of diversity and view demographic trends as an existential threat.

However, the rest of Altman’s piece was pretty much designed to tar Trump by guilt-by-association. It quoted an anonymous NPI attendee named “Richard” to the effect that

Trump has opened the door to nationalism in this country—not American nationalism but the white race. Once that door has fully swung open, you can't close it.

However the more notable Richard at NPI, Richard Spencer, has made clear that he does not think that Trump is any sort of White Nationalist or a member of the Alt Right.

Anecdotally, in my personal conversations with scores of people associated with the Alt Right and race-realist politics, I never met a single one who thought Donald Trump was “one of us.”

Altman engaged in even more attenuated guilt-by-association to suggest that the Alt Right is serving as Trump’s storm troops:

The migration of extremists from Internet message boards to the campaign trail has produced ugly scenes. . . . Trump's events have been tainted by episodes of racially charged violence. At an event in Kentucky, a prominent white supremacist [emphasis added] shoved and shouted at a young black woman. Melees between Black Lives Matter activists and Trump's backers forced the cancellation of a rally in Chicago. At an event in Fayetteville, N.C., a Trump fan named John McGraw, 78, was charged with assault for sucker punching a black protester. "The next time we see him," said McGraw later, "we might have to kill him. [VDARE.com note: The protester, Rakeem Jones, 50 or more years younger than McGraw, was being led out by security for disrupting the speech when he raised his middle finger to the crowd—Trump supporter charged after sucker-punching protester at North Carolina rally, by Justin Wm. Moyer, Jenny Starrs and Sarah Larimer, Washington Post, March 11, 2016]

The “prominent white supremacist” cited was Matthew Heimbach , 25. [Matthew Heimbach recalls pushing black woman at Trump rally ,By Dan Good, NY Daily News, March 2, 2016]. And in fact Heimbach was asked not to attend the last NPI conference, a point that Alman could not have missed because it was widely publicized. I’d be shocked if Heimbach considers himself part of the Alt Right—his TradYouth website includes articles with titles like It’s Time to Abort the Racial Realists.

As for Mr. McGraw, there’s no evidence his attack was motivated by racial animus, and I find it very unlikely that the 78-year-old was inspired by “Internet message boards.”

Perhaps a few Trump supporters have used disproportionate force in ejecting lawbreaking protesters. But these acts of violence still pale in comparison to the violence of anti-Trump rioters in Chicago, Arizona, St. Louis, and Pittsburgh.

Altman reluctantly acknowledged Trump “has never endorsed the tenets of white supremacy or espoused explicit racism on the campaign trail.” However, he suggested that Trump has encouraged his Politically Incorrect fans. The extent of the connection:

Should this even be news?

Fortunately, TIME Magazine has given us some guidelines on how to treat guilt-by-association—during the 2008 election, when Obama’s connection to the vicious anti-white and anti-American rantings of his mentor and  “sounding board,” Rev. Jeremiah Wright, as well as to unrepentant Leftist terrorist Bill Ayers, became an issue. [Judging Pols' Guilt-by-association, March 21, 2008]

In a puff piece about Ayers, Time’s Steven Gray wrote,

For a sense of the reaction in Chicago, consider the headline of a recent Chicago Tribune blog post: "Question for Ayers alarmists: Where were you in the 1990s?" That was the period in which Ayers evolved from a bomb-throwing radical into a socially acceptable pioneer in education.

Chicago Says There Is Too Much Ado About Bill Ayers October 16, 2008

Yet in the 1990s (and for that matter the 1980s) David Duke had been out of the Klan, moderated his message, and tried to work within the system. Indeed, Duke is now just as far removed in time from the Klan today as Ayers was from the Weathermen in 2008. And unlike Ayers, Duke was never even accused of being involved in violence. Yet according to Time, Leftist terrorists can become “socially acceptable” so long as they just cease blowing up buildings, but right wing radicals with no criminal record at all can never achieve respectability.

I say this not to praise Duke, but to note the extreme double standard—especially as Duke has absolutely no connection to Trump other than his praise, while Obama’s political career began in Ayers living room.

At the time of the Wright-Ayers controversy, Michael Grunwald, in an op-ed for Time on how to look at Guilt-by-Association, announced: "The first question to ask when a supporter scandal erupts is whether the supporter really has anything to do with the candidate." He described the “lamest kind of guilt-by-association gotcha, the assumption that candidates are somehow responsible for every faux pas by every clod who gets a title in their campaign, writes them a check or even expresses support.” [Chicago Says There Is Too Much Ado About Bill Ayers, October 16, 2008]

But none of these evil Alt Righters even have a title in Trump’s campaign, and most of them haven’t given him any money.

Thus, based on Grunwald’s definition, their support for Trump shouldn’t even be an issue.

The Alt Right likes Donald Trump because he is a man whose views on immigration, trade, and foreign policy are closer to them. 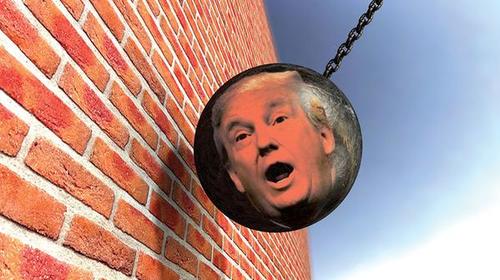 Beyond the policies, the Alt Right sees Trump as a wrecking ball that wreaks havoc on the political and media establishment. The vast majority of Trump’s supporters probably do not share the Alt Right’s views on race—but they support Trump for the same reason.

Timeman Alex Altman says Trump has brought us “out of the shadows.” Yet VDARE.com, American Renaissance, and NPI existed in the open long before Trump strolled down the escalator at Trump Tower. And Altman knows this. Back in 2008, he wrote that VDARE.com Editor Peter Brimelow was  “the leading proponent of the War on Christmas”—which Donald Trump, of course, has now adopted.

Consciously or not, Trump has forced the MSM to face just how many Americans are fed up with the Politically Correct status quo.

Alexander Hart (email him) is a conservative journalist.