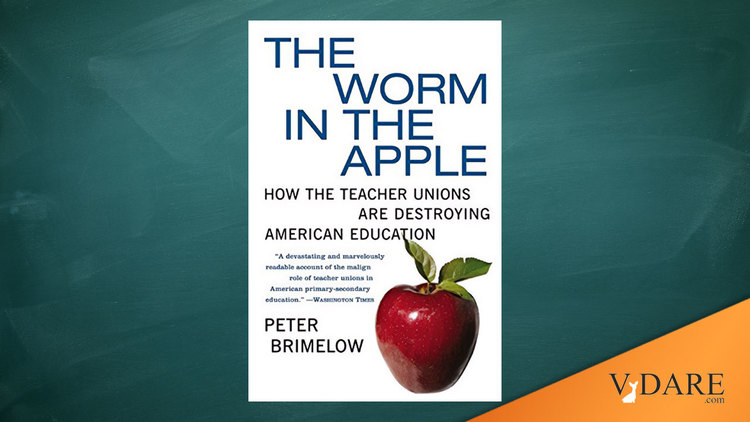 WASHINGTON, Feb. 20 (UPI) — No market mechanism rewards success or punishes failure in public education, and monopolistic unions act as a restraint on trade. So can business principles be usefully applied to analyzing the public schools?

Financial journalist Peter Brimelow thinks so. He is author of the new book "The Worm in the Apple: How the Teacher Unions Are Destroying American Education." "Keep your eye on the costs," he said in a recent discussion with education expert Chester E. Finn Jr. at the offices of United Press International.

Vouchers, for example, show how cost-effectiveness can be gained even when the academic result is uncertain. Under this much-disputed plan, parents may spend government funds on public or private schools of their choice. UPI asked how vouchers were working in such cities as Cleveland, where they have been in place since 1995.

"The research is ambiguous," Finn replied, "because how do you know the kids you're comparing are similar? Paul Peterson's research (at Harvard) with privately funded vouchers is probably the best we have to date. He's finding that the test scores of poor black kids rise when they move into a private school, and those of poor white and Hispanic kids don't. They're flat; they don't do worse."

"What about the cost?" Brimelow asked. "It seems to me you could get a result that was no better academically but cheaper."

"Sure," Finn agreed. "The amount of the vouchers in the experiments I'm describing are much smaller than the per-pupil expenditures in the public schools." The cost of vouchers depends on how the program is structured, Finn said.

"There's no true cost of vouchers. It's how much the funder is willing to pay. So in Milwaukee, vouchers are almost equivalent to the public school payment of $6,500 or so per kid per year. But in Cleveland they're only about $2,500 per kid per year. And in these private projects described in the Peterson study, the voucher is less than $2,000 per kid per year. And the school — which is typically a Catholic parochial school or some other cheap private school — isn't getting full payment. True costs are not being met. And the parents are kicking in money."

"So the taxpayer — " Brimelow said.

"The taxpayer in the private cases is saving a bundle, because private donors are paying for these vouchers. In Cleveland, you could say that the taxpayer is saving a bundle because essentially only the state money moves with the kids. The local money doesn't. The Cleveland public schools portion stays in the Cleveland public schools even when the kids leave."

Brimelow said that to get a similar result at lower cost justifies vouchers and that highlighting the issue of cost efficiency is his greatest contribution to the education debate. "Which, as far as I can see, educators are not interested in."

"That's right," Finn said. "They look at the results, and they don't care about the costs."

UPI noted that some people are wary of vouchers on the principle that government money always has strings attached.

"That's why a lot of private schools are against vouchers," Finn said.

"I never met a private school parent who wants vouchers, for that reason," Brimelow added.

Finn said even school administrators whose enrollments and revenues would rise would rather stay poor than become entangled with the government.

"I think that is a real objection," Brimelow said. "And it's a problem. On the other hand, only 10 percent of American kids are enrolled in private schools. So what's the greatest good for the greatest number? Vouchers may cause problems for the 10 percent in private schools. But they could loosen things up a lot for the 90 percent in public schools. So I'm still reluctant to abandon vouchers. Whatever the regulation that comes with vouchers, it's nowhere near the regulation that comes with a government-owned school system."

Finn agreed that it would be unwise to be "defeatist" about how regulation would follow vouchers.

So, should education reformers keep pushing for vouchers, even though private school parents don't particularly want them?

"Nobody's ever come close to winning an up-and-down vote on vouchers," Brimelow said. "It always polls very well. Then the union has to spend a vast amount of money to defeat it.

"The real problem with vouchers is it's basically a new form of busing for the suburbanites," Brimelow said.

Finn said: "The ugliest aspect of American education is, in my opinion, the aversion of the suburban middle class to letting other kinds of kids join their schools. This takes many forms. Resistance to public school choice is one, and resistance to vouchers is another. Why did nearly all of the kids in the Cleveland voucher program actually attend Catholic parochial schools, which became a very big point of contention in the Supreme Court?

"The way the state program was structured, if the suburban PUBLIC schools would accept (voucher students), they would have even more money than the private schools would get.

"What it comes down to," said Brimelow, "is they don't want to have a bunch of thugs from the inner cities in the schools harassing the kids. And so people vote against vouchers. And frankly, that's not an unreasonable concern. So I don't think they're going to be able to win it."

Brimelow asked Finn if an up-or-down vote on vouchers could be won in the United States.

"Not for a universal program," Finn answered. "The kind that will win will be targeted only to poor people, and maybe only to private schools — structured in such a way that the suburban middle class doesn't feel threatened or invaded."

"The unions have been benefiting from this feeling very adroitly," Brimelow observed.

"There are layers of political irony here," Finn said. "The suburban districts that don't want these kids are heavily Republican. The districts full of kids who want to go somewhere else are represented by Democrats. Yet if you look at who's willing to vote for a voucher program, it's for the most part Republicans. And the Democrats, allied with the teacher unions, say: 'No way!' "

Finn said that public school choice, where pupils can go anywhere within the state, seems to work well in Minnesota.

Brimelow said the surge in home schooling reflects parental resistance to government schools. Effective home-school parents spend only about two hours per day in academic instruction, he said. "You can actually deliver the substantive content in a short period of time. An enormous amount of what goes on in the government school system is just babysitting and waste."

Finn addressed the decline in Catholic schools, which no longer can rely on the free labor of nuns.

"It's gotten more expensive," he said. "The schools are located, for the most part, in urban areas that are no longer predominantly Catholic, so they have become a social welfare purpose for needy kids. The new suburban parishes are located in places parents moved to because of the schools, so there's not a huge demand to start new Catholic schools there. The schools are now left with poor black kids, who are not Catholic. The families can't really pay tuition at a time when costs are rising."

Brimelow said the history of high school dropout rates and the natural distribution of academic ability call into question compulsory attendance laws and the goal of universal secondary school success.

Of course, high schools can always dumb down the curriculum to the point where almost everybody would graduate if they hung around long enough.

Finn said this has become a real issue in states, such as Massachusetts, that have exit exams for high school diplomas. "Thousands of kids are not passing the test," he said. "They've put in their time; they've sat in class. ... So now what? Do you deny them their diploma? Do you give them 47 chances to take the test? Do you give them extra tutoring?"

Finn said Jackson Toby at Rutgers has argued for years that the way to solve problems in discipline, morale and achievement in American schools is not to make people attend them. Compulsory attendance laws are not well-enforced, and truant officers have vanished.

Yet Finn said he would not want to see "an awful lot of 15-year-olds" out on the street. "School is a warehousing and public safety function for them and the rest of the community. We've let vocational education become obsolete."

Brimelow disagreed. "If there isn't any demand for relatively unskilled labor, why do we have these vast numbers of immigrants? Kids are falling asleep in class because they are working at the malls." He said adolescents could learn a lot by working in highly structured environments such as McDonald's.

Brimelow, referring to his native England, said some forms of socialism are better than others.

"During the war, Churchill had no interest in education, so he turned the whole thing over to the socialists. And they designed the perfect socialist education system, which was based firmly on the concept of IQ. Because in those days, IQ was a progressive idea to identify smart poor kids."

"Just like the SAT was a progressive, equalizing idea," Finn added. "You didn't have to go to Andover or Groton in order to get into Yale."

"So the bulk of kids left school at 15," Brimelow continued. "Some stayed on till 16, and a few stayed till 18. A very small number went on to university. And that, of course, is the nature of what the right-hand tail of the bell curve (graphing academic ability) would suggest.

"So that's always struck me as a fairly efficient system. Of course, it's based on triage, as our National Health Service was based on triage. They were able to boot people out and tell them to go away and die."