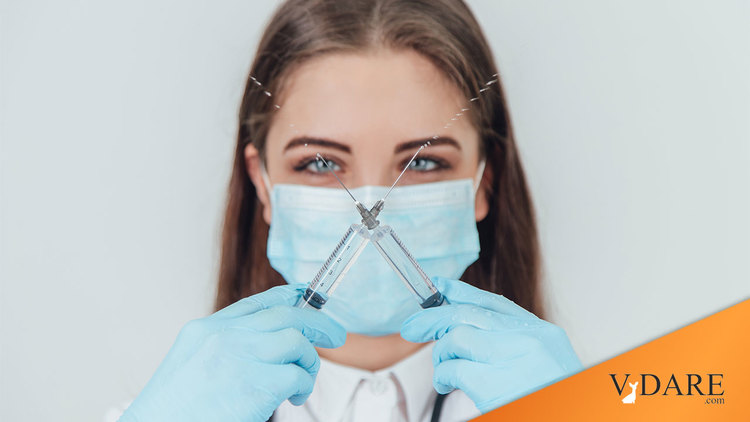 If I weren’t already staunchly pro-vaccination, the vaccine zealots would turn me against the COVID shot. The proof that they’re practicing religion and not science is their refusal to acknowledge the great heaping hunks of immunity a person gets from natural infection.

Obviously, you don’t want to contract COVID just to get all that boffo immunity, but lots of people have already been infected, so why can’t we count them the same as vaccinated?

The current research—and that’s all we have for the vaccines, too—indicates that natural immunity is not as good as vaccine immunity—it’s better! Study after study keeps finding that the previously infected have stronger, broader and longer-lasting immunity than people who’ve received the vaccine.

When the vaccinated, with their pipsqueak immunity, stop browbeating the already-infected, I’ll believe this is something other than a cult.

Nope. Your prior infection is no good here! We are accepting ONLY vaccination cards.

Whatever that impulse is based on, it’s not “science.”

Then in June, the Cleveland Clinic produced a gigantic, perfectly controlled study finding that people who’d already had COVID received no benefit from vaccination.

The clinic had tested its 52,238 employees throughout 2020. At one point or another, 2,579 tested positive. By mid-December, 46% of the recovered COVID patients had taken the vaccine, but more than half (54%) had not.

The authors concluded: “Our study … provid[es] direct evidence that vaccination does not add protection to those who were previously infected.”

NO! This was terrible news for the vaccination Karens! Their position is: Everyone must get the vaccine. Even if you live alone on a mountaintop and eat leaves and beetles to survive, even if you’re a burbling infant, even if you’ve had COVID, YOU MUST GET THE VACCINATION!

In short order, the Cleveland Clinic was bullied into submission. The authors of the report issued what sounded like a retraction, but, on closer examination, was just a lot of airy nonsense.

E.g.: “This is still a new virus and more research is needed. …”

Duh. Same for the studies showing how fantastic the COVID vaccines are.

“It is important to keep in mind that this study was conducted in a population that was younger and healthier than the general population. …”

This study SUCKS. It only applies to the entire working-age population of the U.S.!

“In addition, we do not know how long the immune system will protect itself against re-infection after COVID-19. …”

Ditto for the vaccine.

Presumably, it’s also “safe” to use Gwyneth Paltrow’s healing crystals if you have previously tested positive. The question is: Do you need to?

“ … and we recommend all those who are eligible receive it.”

Just this week, a study out of the Emory University Vaccine Center, led by “world renowned immunologist” (as he is known) Rafi Ahmed, found “durable and broad immune memory after SARS-CoV-2 infection.” And get this: The researchers also found that a natural COVID infection protects against a range of other coronaviruses, too.

What’s so impressive about these studies is that they are going against the woke mob. After a year of seeing scientists and scientific journals irredeemably corrupted, any study that won’t be cited in Teen Vogue carries extra credibility. Worse, the results support Sen. Rand Paul! Nobody’s going to lie about that.

This isn’t just a matter of policy not catching up to the science. The vaccine Karens positively disdain the previously infected. Instead of being treated like the superhumans that they are, recovered COVID patients are scorned, treated like smokers or AIDS victims. (No, sorry—the latter were revered as “angels.”) We’re simultaneously told that COVID is WILDLY contagious and … it’s your own damn fault for not wearing a mask, socially distancing or getting a vaccine.

This abject refusal to acknowledge the existence of natural immunity proves that the vaccine Karens don’t care about the health of their fellow human beings. They just want to boss us around.