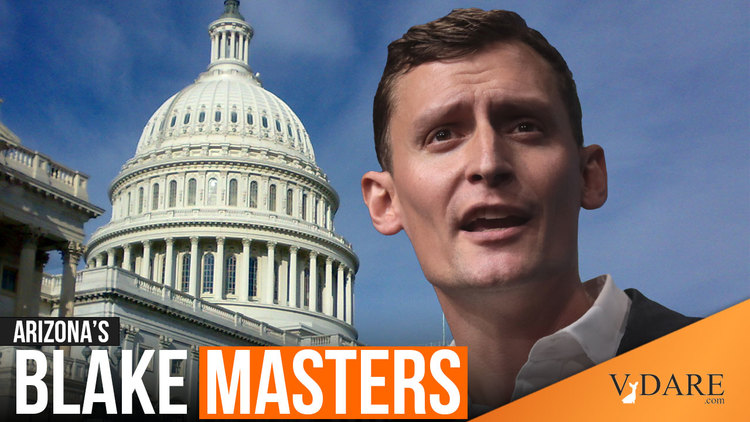 Blake Masters, chief operating officer at Thiel Capital and newest GOP Senate candidate in Arizona, offers a fresh agenda that sets him apart from the national party: he wants to slash legal immigration. Out of the announced Senate candidates in Arizona, this makes Masters the America First contender.

Though Masters recently said election integrity “may be the top priority” of his campaign, immigration, Big Tech censorship, and Critical Race Theory are the main issues featured at this website [2020 election becomes early dividing line for Republicans in crucial 2022 Senate race in Arizona, by Alex Rogers and Michael Warren, CNN, July 17, 2021]. Immigration is the first issue listed, which shows he shares the concerns of immigration patriots:

Our border with Mexico is a disaster. The Biden Administration refuses to finish the border wall and practically invites people to come here illegally. Big business is OK with it, since it means cheap labor. And progressive activists just want to add immigrants to the voter rolls. This must stop.

We need to completely end illegal immigration using every tool at hand: physical walls, surveillance technology, thousands more border patrol agents, and mandatory E-Verify for employers. And we need to rework our legal immigration system too. When so many already existing Americans are struggling, it’s not clear that we need a million new legal immigrants every year. We must reform our heavily abused asylum system and rethink our foreign worker visa programs entirely, to make sure that every American can lead a good life in a safe and secure country.

In an interview with Phillip Nieto of The Spectator, the 35-year-old Stanford Law grad offered specifics on how to reduce legal immigration: “We do not need hundreds of thousands of people from India and China to come in every year to take coding jobs” [Blake Masters: ‘Experience holding elected office forever is overrated,’ July 19, 2021]. Many if not most Republicans operatives would say the opposite, that we “need” these “talented” Asians to take American jobs. That’s why the majority supported the Indian green card giveaway known as the “Fairness for High-Skilled Immigrants Act.”

I think the H-1B system is totally abused. I think we probably should suspend it until we can kind of figure out what’s going on. Should it continue at all? It’s not clear to me.

He also hammers on immigration in most of his media appearances and press releases, as these tweets show:

"The Left and the Democrats, they have taken control of almost every major institution in our country, and they're very close to controlling it all." pic.twitter.com/He16EFLcz1

Although the other primary candidates acknowledge immigration as a key issue, Masters is the only one who seems to fully understand that legal immigration is a problem. He’s the genuine America First candidate who checks all the right boxes:

On tech censorship and the persecution of former President Donald Trump’s supporters, Masters gets it. “Break them up and focus on censorship. Google would be a good start,” he said [Arizona Senate Candidate Blake Masters Comes Out Swinging on Big Tech, by Santi Ruiz and Eliana Johnson, Washington Free Beacon, July 14, 2021]. He also acknowledges that Big Tech uses “white supremacist” as an umbrella term to justify censoring anyone they don’t like. On Twitter, he denounced PayPal’s partnership with the Anti-Defamation League as a threat to free speech:

Obvious pretext to suppress any dissent — you’ll be shocked at what views they consider “white supremacist” just one year from now.

Obvious pretext to suppress any dissent — you’ll be shocked at what views they consider “white supremacist” just one year from now. https://t.co/FBFvBsOxo4

As for CRT, pretty much every Republican denounces the racial toxin, but very few call it anti-white. House Minority Leader Kevin McCarthy recently declared CRT racist. But he didn’t identify the target of the hate.

Masters is different. In May, he was clear about what CRT is:

It is straight up anti-white racism. I don’t think we’re allowed to say that, but let’s call it what it is. It is toxic and it does not belong in our schools [FreedomWorks - America's Comeback Tour - Phoenix,  Facebook, May 25, 2021].

Like J.D. Vance in Ohio, Masters received a substantial war chest from his boss [Thiel ally's entrance kicks off protracted GOP Senate fight in Arizona, by James Arkin, Politico, July 12, 2021]. Both Masters and Vance are running on platforms that stress immigration restriction, anti-tech censorship, and other populist ideas.

The major difference is that Masters never publicly attacked Trump. Vance’s biggest liability is his past anti-Trump, anti-nationalist baggage. Masters lacks it. This makes him an easier sell to Arizona conservatives and increases his chances of Trump’s endorsement.

Immigration is the core issue of the Arizona GOP Senate primary, and every declared candidate wants to position himself as the ultimate border hawk. Whoever wins will face Sen. Mark Kelly, a Democrat who toes his party’s line. This makes him a vulnerable target for 2022.

Arizona Attorney General Mark Brnovich is considered the GOP primary favorite. He twice won a statewide election and boasts Establishment support. Much of his tenure has centered on immigration. In his early years, he fought against driver’s licenses and in-state college tuition for “DREAMers,” meaning illegal aliens who arrived in the U.S. as minors [AG Brnovich makes another attempt to deny Dreamers in-state tuition, by Howard Fischer, Arizona Capitol Times, July 1, 2015].

But he also oversaw the gutting of SB 1070, the Arizona law that cracked down on illegal immigration. In 2016, Brnovich agreed to a settlement with Leftist activists that resulted in law enforcement no longer investigating to investigate the immigration status or ask for papers from those they suspect are in the country illegally [Arizona's once-feared immigration law, SB 1070, loses most of its power in settlement, Nigel Duara, Los Angeles Times, September 15, 2016]. He even ruled in 2017 that the City of Phoenix’s welcoming policies toward illegal immigrants didn’t violate SB 1070 [Brnovich says Phoenix immigration policy conforms to SB1070, by Howard Fischer, Arizona Capitol Times, October 16, 2017].

In other words, Brnovich knows that immigration is the key issue in 2022’s midterm elections. This is why he’s acting far more aggressively.

But it’s worth noting that he emphasizes he’s the “son of immigrants.” It’s one of the first things you see on his campaign website. Unlike Masters, his campaign platform only talks about border security. It doesn’t even mention ending illegal immigration, and it certainly doesn’t call for the reduction of legal immigration. But, as with Masters, it’s the top issue at his website [The Brnovich Plan, brnoforaz.com].

The attorney general faces one big problem that might doom his run: Trump doesn’t like him. The former president has repeatedly attacked Brnovich over his failure to stop election fraud [Arizona attorney general, slammed by Trump, announces Senate bid, by Dan Merica, CNN, June 10, 2021]. This animosity might lead Trump to endorse and campaign for a rival.

No wonder Masters said election integrity is a top priority of his campaign. It’s also important to the base in Arizona, and Brnovich’s poor reputation on the matter may sink him.

Another possible candidate: Rep. Andy Biggs, head of the House Freedom Caucus. Observers doubt he will run, but it’s not out of the question [Senate candidates walk Trump tightrope as he returns to Arizona, by Bridget Bowman, Roll Call, July 22, 2021]. Biggs is strong on illegal immigration, effectively fights against bad legislation proposed by Democrats and the GOP Establishment, and defends colleagues under fire from Republican leaders. He was one of 14 Republicans who voted against Juneteenth. Biggs is one of the best lawmakers on Capitol Hill and would make a fine senator. But as with others, he doesn’t address legal immigration.

Maybe they should: Kelly has polled well against GOP comers. Five-Thirty Eight put him 11 points ahead of Biggs, 10 ahead of Brnovich, and 9 ahead of Maguire. The one name not on that list is Masters, who announced on July 12. Polls that include Peter Thiel’s protégé should begin soon.

If he and like-minded Republicans in other states win in 2022, we might finally have a serious discussion about immigration in Washington, D.C. The Historic American Nation needs representatives who will fight, not simply react to terrible Democratic policies.