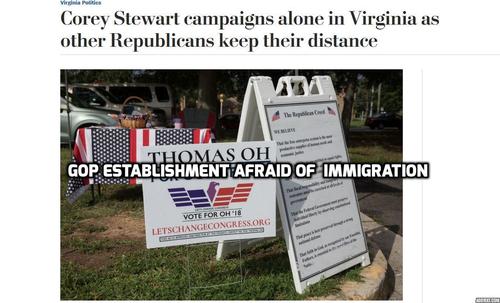 A few months ago, I wrote about the congressional race in Virginia (VA-10) that includes Loudoun County, where I live. At the time, a Trump Republican named Shak Hill was running against well-funded incumbent Establishment favorite Barbara Comstock in the GOP primary. Hill received a respectable 40%. But, as I predicted:

The ultimate race, presumably between Comstock and Democrat Jennifer Wexton, will be one of the most watched in the country this fall. VA-10 could well go Democrat for the first time since 1978.

This is entirely due to changing demographics. Conservative Republican Frank Wolf won the seat in the Reagan landslide of 1980 and didn’t relinquish it until he retired in 2014. That year, Comstock won the seat by 16 points (56% to 40%) over her Democratic challenger.

The most recent polling suggests Democrats are right to be optimistic. A Washington Post poll has Wexton up by 13 points. This despite massive Republican funding for Comstock (the NRCC has purchased $4.8 million worth of ad buys for her in VA-10) and seemingly non-stop TV and radio ads from the incumbent.

I have seen many more commercials for Comstock than Wexton. But they don’t appear to be working. 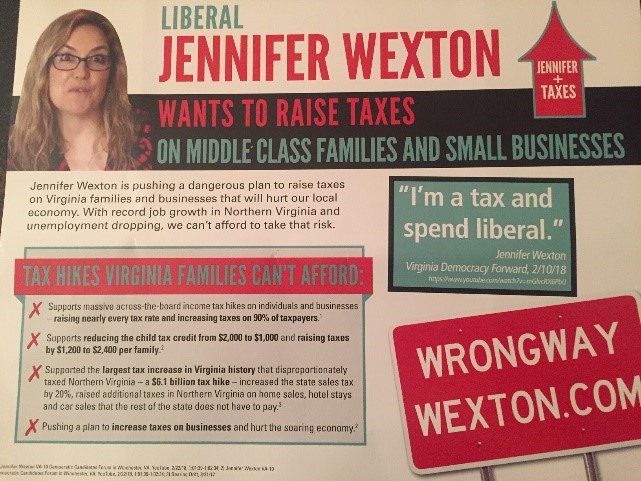 In general, Comstock is acting like it is 1988. Back then, the GOP could simply call Democrats “big spenders,” “high-taxers” and “liberals” and watch the support roll in. But those days are gone. Almost all of the Comstock ads so far focus on Wexton’s support for higher taxes and tolls for northern Virginia. But they aren’t moving the needle.

To be fair, Comstock has started to focus on MS-13 gang violence. Of course, she never mentions immigration as the source for MS-13. Given that she is basically an open borders advocate (Numbers USA grade of D) she has little room for criticism. Still, the trend of Republicans focusing on immigration is rising and is consistent with a more Trump-like national party. 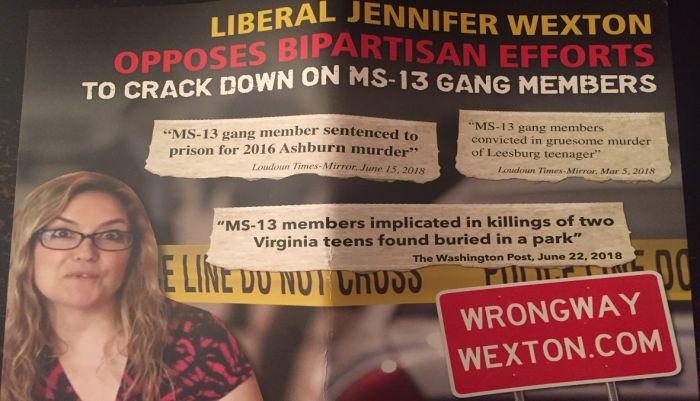 In contrast, another race in the Commonwealth, for US Senate, pits Republican Corey Stewart against incumbent Democrat Senator Tim Kaine. Unlike Comstock (whose campaign has raised $5.7 million) Stewart’s campaign has only raised $2.3 million—n.b. for a state-wide race.  Kaine has raised $21 million. And, to a shocking extent, Stewart is not being funded or helped at all by the national GOP.

It shows. I have only just started to hear radio ads for Stewart in the last week and have only received one flier (given to me by a volunteer standing outside a back-to-school orientation in late August). 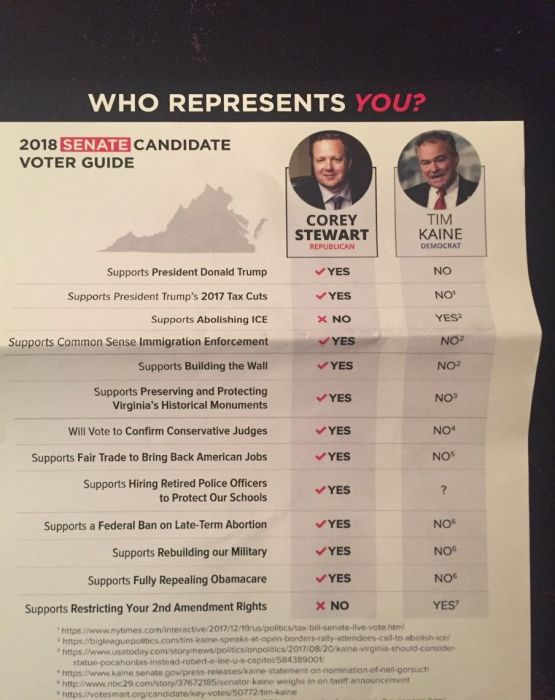 Once Stewart won the nomination in June, the Republican Establishment was quick to distance itself from him.

The National Republican Senatorial Committee (NRSC) announced it was not funding Stewart’s campaign in what is still technically a swing state.

A former Virginia House of Delegates candidate turned lobbyist named Brian Schoeneman said, “I can’t vote for Stewart. His whole philosophy of governing is anathema to me. All the immigration-baiting … all the Confederate crap and the hanging-out with the Jason Kesslers of the world—that’s the exact antithesis of everything I’ve been trying to do with the party the last 20 years.” [Trump has Corey Stewart's back, but GOP leaders see political time bomb, By David Sherfinski, Washington Times, June 13, 2018]

Local GOP candidates such as Thomas Oh and David Riggleman have distanced themselves from Stewart. Comstock has mostly been silent and has not campaigned with Stewart or invited him to her events.[Corey Stewart campaigns alone in Virginia as other Republicans keep their distance, by Antonio Olivo, Washington Post, August 22, 2018]

But one major Republican has publicly endorsed Stewart:

Stewart is a tenacious campaigner who makes many stops at rallies and events. I attended one recently in Sterling, Virginia. About 60 people gathered at an Italian restaurant. This included four blacks, four Asians and a few who may have been Hispanic or Indian among a group of well-dressed college students who appeared to come in a group.

Stewart spoke for only about 15-20 minutes as he had to go to another event right after the one I attended. The very first issue he spoke on was Affirmative Action–an issue that has all but disappeared from political campaigns but is very unpopular with whites in general and white Republicans especially. Why did the GOP abandon this issue that could win many votes from working class whites and others? 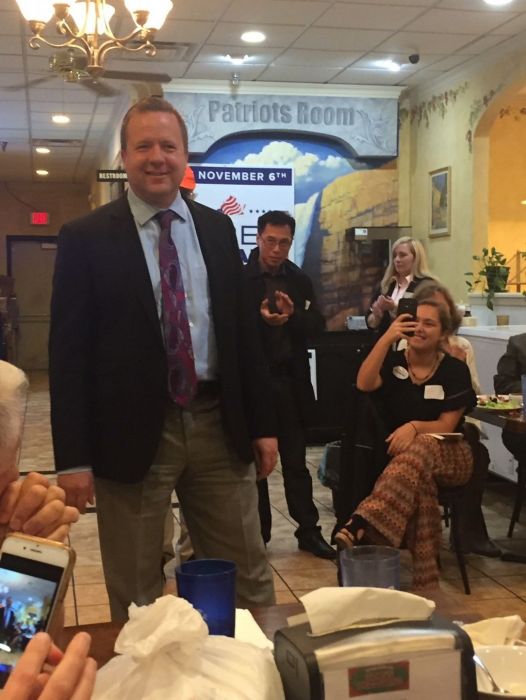 Stewart condemned Affirmative Action and promised to vote to end the policy. He announced he was supporting a lawsuit by Asian students against Harvard that claims they were kept out due to quotas. He also mentioned that Affirmative Action discriminated against whites.

His loudest applause line: when he mentioned he will help President Trump to  “build the wall.” Stewart spoke a bit about GOP staples such as taxes and crime, but much of his speech was about how he will support Trump in getting his agenda enacted.

Somewhat surprising was his failure to mention the war against Confederate and European heritage in Virginia, including frequent vandalizing of statues. Stewart has bravely and loudly spoken out on this issue in the past and has been heavily attacked for it. [Protesters mob provocative Va. governor candidate as he defends Confederate statue, By Fenit Nirappil, Washington Post, February 11, 2017.] Is this why the national Republicans are not funding his campaign?

The latest poll in the race shows Kaine up by 18 (down a bit from a 23-point edge he had in July). Though, in his speech, Stewart mentioned a poll that had him down by only 5 points.

Though the national GOP is no help, Stewart has raised over a million dollars all by himself, mostly from small contributions inside Virginia. This is dwarfed by Kaine’s $21.7 million but shows that Stewart can count on support of actual Virginia voters. [Republican Stewart stays afloat in Va. Senate race with another $1 million, by Antonio Olivo, Washington Post, October 16, 2018]

Virginia has made a very rapid transition from red to purple to blue, almost entirely due to immigration. A former member of the “solid South” for Republicans, Virginia is now a liability for the GOP. Whites were 56% of the population in Loudoun County in the 2010 Census. They may well be below 50% by the 2020 Census. I have written of the massive and sudden influx of Asian Indians in my town over the last few years. Though most noticeable in northern Virginia, this replacement is happening throughout the Commonwealth. In 2016, whites were down to an estimated 56% of Virginians. As Loudoun County goes, so does Virginia.

Comstock and Stewart represent two ways of confronting this stark demographic reality for Republicans. Stewart is staking out Trump-like conservative positions on cultural issues and actually speaking to the concerns of traditional Virginians. Never-Trumper Comstock has chosen to ignore cultural issues that matter to whites while pandering to non-whites through things like handing out work visas like they were candy (she has an F grade from Numbers USA on the issue of work visas).

Not surprisingly, Comstock’s  fellow Never-Trumper, columnist Mona Charen, wrote the following two years ago, when she thought Trump would lose to Hillary Clinton:

If the Republican party is going to survive post-2016, Barbara Comstock is exactly the sort of leader to help it rise from the rubble. She could be, she should be, the new face of the party.[Virginia Republican Comstock is new face of GOP, by Mona Charen, October 28, 2016]

In fact, Trump Republicans like Stewart offer the last hope for the Republican party, while throwbacks like Comstock are being left in the shade. The fact that GOP elites have chosen to fund Comstock and shun Stewart speaks volumes. If Stewart had money for ads he would no doubt speak effectively to issues that can still galvanize Republican voters and increase the reach of the GOP.

It is not just Virginia that faces this dilemma. North Carolina, Florida and Georgia are not far behind in terms of formerly conservative, Southern states being turned into just one more Democrat outpost. Unless Virginia can elect leaders like Corey Stewart—who will stem the tide on replacement immigration—the whole nation will soon resemble California and national politics will be essentially over for the GOP and the Historic American Nation.