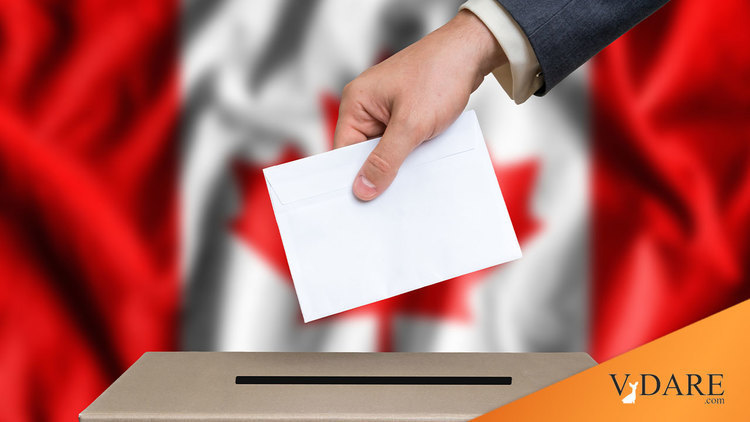 This is Canada's immigration moment. Three books by respected authors have suddenly appeared, demolishing Canada's immigration policy and proving it the worst in the world. (It's also the biggest in the world, relative to population – roughly twice as many immigrants per year as enter the U.S.) The authors, of course, have been attacked as "racist," "protectionist," "Marxist" etc. etc. Well, not "racist" really, as in "I don't believe Mr. Immigration Reformer is a racist, you understand." (VDARE.COM readers know the drill.) And those are their critics' best shots.

The intellectual battle is over. In one blow, the immigration reformers have won. The political battle, however, is not yet begun.

Canada and the U.S. are united by symbiotic idiocy. Ted Kennedy's Immigration Act of 1965 wrecked American immigration policy, replacing an emphasis on national origin with "family reunification" i.e. uncontrollable chain migration. Canada could hardly wait to imitate this folly. In 1967, Canada too removed national origin as a criterion for immigration selection. In 1971, Pierre Trudeau - best understood as Canada's Peter the Great, Napoleon or FDR - promulgated an official policy of "multiculturalism." In 1985, Brian Mulroney's government, of the so-called Progressive Conservative party, adopted "family reunification" as a right and priority.

In 1989, Mulroney announced a five-year immigration target of 250,000, regardless of economic conditions, again aping the United States and ending Canada's traditional pattern of wave and pause. In 1993, Liberal Prime Minister Jean Chretien announced a permanent immigration target of 1% of Canada's population, i.e. 310,000 a year. [VDARE.COM note: For historical background see Immigration And Canadian Nation-Building In The Transition To A Knowledge Economy by Jeffrey G. Reitz.]

Canada's population reached 20 million in its Centennial year, 1967. This growth was a cause of great celebration. Thirty-five years later, the population reached 31 million. Not many are celebrating now. Centennial Canada has been pretty much abolished. Canada has been transformed: ethnically, linguistically, culturally and politically. Toronto, its largest city, and Vancouver, its third largest, are no longer majority Canadian. (Seventy-six percent of immigrants settle in Toronto, Montreal or Vancouver; 90% of refugees settle there.)

It was almost two decades ago when I first sat at the feet of Charles Campbell, the grand old man of the Canadian immigration reform movement. These more recent authors - indeed, everyone interested in immigration reform in Canada's public policy community i.e. all 10 of us - owe Charlie Campbell a great debt. His book, Betrayal and Deceit: The Politics of Canadian Immigration, is still available and worth reading. It was published privately, after having been taken up and abandoned, at great financial and personal cost to Campbell, by a Toronto publisher who shall remain unnamed because of Canada's nasty libel laws.

Diane Francis is the former editor of Canada's Financial Post. She is reputedly the country's highest-paid journalist, despite or because of which she is regarded as distinctly erratic. For example, she has described housewives as "traitors to the GDP," and has claimed that Quebec separatism was a Catholic plot. I'm told she has said she was on her "best behavior" in writing Immigration: The Economic Case. And so she is. The same can't be said of her publisher, however. The proof-reading is a disgrace.

Reading Francis - the most anecdotal of the three - I found myself thinking despite myself that her case stories couldn't possibly be true. But they are. My favorite:

"An African claimant refused to give his name, but, when pressed to do so at his refugee hearing, he looked at his lap and the gum wrapper that he was fondling and said his name was 'Bubblicious.'"

Francis is weakest in her consideration of the politics of immigration and strongest in her evisceration of Canada's family reunification and refugee policies. In 1986, the Canada's Supreme Court ruled (in the Singh decision) that any foreigner reaching Canada was entitled to the full protection of Trudeau's U.S.-style Charter of Rights. This means that judges control immigration and refugee claims, making it almost impossible to deport anyone.

Terrorists, murderers, rapists, drug dealers, gangsters and the disease-ridden are all routinely allowed to remain in Canada. Almost none are legitimate refugees by the United Nations definition. Almost all are economic migrants and opportunists. Many are the indentured servants of gangsters; they have paid up to US$50,000 to be brought here. Over 70% of refugee claimants are now coming to Canada directly from the U.S. Between 1986 and 2000, Canada accepted 472,857 refugee claimants.

Ottawa does not even know who these people are—destroying or falsifying your documents is the best and fastest way to become a new Canadian.

Thus Ahmed Ressam was allowed to enter Canada despite admitting ties to Algerian terrorists and allowed to stay even after several criminal convictions. He was ordered deported, but nothing happened. (Canada is ignorant as to the whereabouts of over 27,000 such "deportees.") Ressam got a fake passport, flew to Afghanistan for Al Qaeda training, returned and then plotted to blow up Los Angeles International Airport. Only a vigilant customs officer at Port Angeles, Washington, prevented his entry into the U.S. in 1999.

"Another case involves Somalian warlord Mahmoud Mohammad Issa Mohammad. He was convicted in 1968 of participating in an attack by the Popular Front for the Liberation of Palestine against an El Al plane in Athens, in which one person died. [He threw a hand grenade into the cabin and machine-gunned the passengers.] After serving only four months in prison, he was released when his fellow terrorists hijacked an airplane and held its 155 passengers hostage until his release. 'The PLO negotiated his release,' said an immigration official. 'He went to Spain, assumed a new identity and came to Canada in 1987. We found out he was here. We instituted deportation hearings against him, and he is still here. He's living happy in Brantford [Ontario], and his case is still before the courts.'"

As Francis demonstrates, family reunification has resulted in an official Canadian policy of importing the worst and the dimmest: unskilled and illiterate in both French and English. And old: 210,000 elderly parents between 1986 and 2000 alone. "By 1997, immigrants comprised 18% of the country's population as a whole, but accounted for 28% of people older than 65 years of age." Chain migration has resulted in the importation of whole villages from India, China, Sri Lanka, Somalia and elsewhere.

What are the costs? Nobody knows. The federal government refuses to find out, and for a corrupt reason: welfare, education and legal aid are all the responsibility of the provinces and municipalities.

Martin Collacott is a retired Canadian diplomat with extensive service in Asia. He is one of several former senior civil servants who have publicly excoriated Canadian immigration policy. His sober, elegant and thoroughly-documented Canada's Immigration Policy: The Need For Major Reform is published by The Fraser Institute (US$5 or free in PDF format).

And this fact is highly significant and encouraging. The Fraser Institute is the closest Canadian equivalent to the Cato Institute. It was for years reflexively pro-immigration a la Wall Street Journal. (I witnessed Peter Brimelow's hostile reception when he spoke there in 1998.) [Peter Brimelow writes tolerantly: Ah, compared to what?] Collacott's appointment as a Senior Fellow suggests that long-time Executive Director Michael Walker is one Canadian libertarian amenable to empirical evidence—and also, perhaps, that like many of my Canadian libertarian friends, he has been persuaded by the arguments of Hans-Hermann Hoppe.

Collacott demonstrates that the alleged rationale of Canadian immigration policy is based on several familiar economic fallacies. He proves -

1) that Canada's population will continue to grow for some time, so there is no imminent labor shortage;

2) that only fantastic levels of immigration can prevent the population's average age from increasing;

3) that our current immigration intake is not useful in lowering the population's average age;

4) that anyway an aging population is not calamitous;

5) that advances in productivity and technology, not increased labor inputs, are critical to economic growth,

6) that the post-1980 immigrant cohort is greatly inferior to previous cohorts by every index;

7) that Canadian immigrants don't create jobs—not for native Canadians at any rate.

And Collacott, unlike Francis, explores politically perilous territory. One example:

"Sikhs nation-wide number about half a million [overwhelmingly in British Columbia] or roughly 1.6% of our total population. They have, however, been able to exercise an influence far greater than might be expected given their numbers. They have achieved this by delivering large blocks of votes, which often determine the results of an election in a particular riding or in the choice of candidate by a particular party…Predictions are that Sikhs will make up about 15% of the 3,600 delegates expected to attend the Liberal leadership convention in November [2003, to select Jean Chrétien's successor] and that Sikhs could potentially have significant influence at delegate selection meetings in anywhere from a third to a half of Canada's 301 ridings."

But the best examination of the politics of Canada's immigration disaster, and its social and economic consequences is Daniel Stoffman's Who Gets In: What's Wrong With Canada's Immigration Program—And How To Fix It. Quite simply, the purpose of Canadian immigration policy from the 1970s to the present day has been to import Liberal voters from other countries – to elect a new people, as Peter Brimelow and Ed Rubenstein put it in their examination of the same phenomenon in the U.S.

Thus in May 2000, Canada's then-Finance Minister Paul Martin attended a fundraising dinner for the Federation of Associations of Canadian Tamils (FACT). (Up to 20,000 Canadian Tamils are said to be Liberal Party members.) Also present were another cabinet minister and a Liberal MP.

Martin had been warned in advance that FACT was a front for that vicious terrorist group the Liberation Tigers of Tamil Eelam. The warning came from the Canadian High Commission in Sri Lanka and was based on information provided by the Canadian Security Intelligence Service and the U.S. State Department.

Martin simply brazened out the scandal, accusing his accusers of being "un-Canadian." In any normal country, his career would have been over. Instead, he is universally expected to replace Chretien as prime minister in 2004.

Quite a few Americans argue that Canada's points system, which in theory rewards immigrants who have skills, speak the national languages etc. etc. is something the U.S. should emulate. But the practice is very different. Stoffman relates a conversation with U.S. economist George Borjas:

"He was disappointed when I informed him…that the skilled portion of Canada's immigration intake was down to 23%. 'Why did it shrink way down?' he asked from his Harvard office. 'Why did the Canadians allow this to occur?' Because the Canadian program had been taken over by its clientele, I said, who insisted that the family class be expanded."

Stoffman is a left-winger (his Toronto Star 1995 review of Brimelow's Alien Nation harrumphed unhappily about its frank discussion of race) and he extrapolates from Borjas's analysis in Heaven's Door to estimate that Canadian immigration policy lowers native wages and results in an annual transfer of CDN$30.7 billion from the poor to the rich. This has led to Stoffman being accused by Terence Corcoran in the neoconservative National Post of being a "Marxist," and by Corcoran's colleague Andrew Coyne of being a "protectionist." As I noted above, these—along with the usual "racism" insinuation—are the best arguments the immigration lobby has.

Yet valuable as Stoffman, Francis and Collacott are, there is something missing. Something more important than all their arguments put together.

It is this: Even if it could be proved that Canadian immigration policy worked to the economic benefit of all Canadians (and not just to the immigrants themselves and rich consumers), even if our refugee policy was not a threat to Canadian and American security, this would still not justify the transformation of Canadian society.

Canadians have never been asked if they desire a non-white Canada. If asked, they would say: No.