[See also: Nigel Farage and UKIP: A Step in the Right Direction, by Sean Gabb]

There were simultaneous elections in Britain for the European Parliament and for a third of the seats in the English metropolitan local authorities on Thursday, May 22. The European election results will not be declared until Sunday evening, and I hope to comment on them then. But the local authority elections are in, and they unmistakably show radical and increasing disenchantment with the current order of things—above all with Britain’s massive, historically unprecedented, government-orchestrated immigration.

Here are the results so far declared:

These elections have no direct bearing on how the country is governed. (In fact, no election has any bearing on how the modern British police state is governed). The European Parliament has little control over EU policy, and the whole British contingent makes up only 14 per cent of the total seats. In Britain’s unitary state, the local authorities mostly implement policies set by the central government in London, and mostly spend money handed out from London.

But these elections’ significance is symbolic. They are a grand opinion poll on what the British people think of how the country is governed.

In part, what we see here is in part the normal swing of the pendulum. The Conservatives are in government, together with the Liberal Democrats. Therefore, Labour does well in the local elections.

What we also see, however, is the continued rise of the anti-immigration, anti-European Union UKIP. As I write, no one seems to have calculated the percentage shares of the vote each party received. But the BBC Thursday projection was for the Labour Party to get 31 per cent, the Conservatives 29 per cent, and the Liberal Democrats 13 per cent. UKIP was expected to get 17 per cent.

There are two main conclusions to be drawn from these elections.

Of course, how UKIP will do in the 2015 general election is beyond predicting. But it remains on course to win the European elections. Its core message—leave the European Union, end mass-immigration, strip political correctness out of law and administration—is widely and solidly popular, even in notoriously cranky (and relatively UKIP-resistant) Scotland, notwithstanding the fact that it may be about to vote itself out of the Union. [Seven out of ten Scots 'back Ukip policy on immigration', by Magnus Gardham, HeraldScotland.com, May 21, 2014] 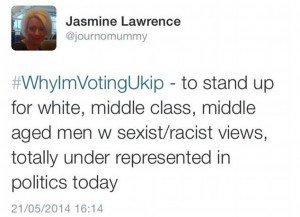 For months now, almost every MSM news story about the party has been accusations of racism, sexism, homophobia etc. Senior executives at the BBC have even taken to Tweeting insults. For example, a day before the elections, Jasmine Lawrence, one of the BBC’s news editors, Tweeted: “#WhyImVotingUkip – to stand up for white, middle class, middle aged men w sexist/racist views, totally under represented in politics today.” [BBC editor taken off election coverage after branding Ukip racist and sexist, by Tara Conlan, theguardian.com, May 22, 2014]

Essentially, when UKIP became a threat, the British Establishment attacked it exactly as it attacked the much-harder core British Nationalist Party in —not without effect in the BNP’s case. 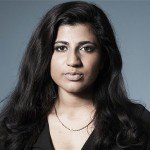 In response, Nigel Farage, the UKIP leader, has repeatedly bent over backwards to insist that his party stands for all the people of the United Kingdom, regardless of race, sex, sexual preference etc. etc. This has led to embarrassments, such as when a “British Asian” UKIP “youth leader,” Sanya-Jeet Thandi, abruptly quit, claiming to have discovered the party was “racist” and terrifying. (Farage suggested, probably accurately, that she was intimidated by her fellow-students at the London School of Economics: Nigel Farage: Ukip youth leader quit because she was intimidated, by Georgia Graham, May 15, 2014).

And, of course, his groveling did nothing to stop the drumbeat of accusations.

But the MSM campaign has apparently had little perceptible impact on the election. It seems that few believed the coverage. Or, it may even have encouraged people to vote UKIP in the hope that it was guilty as charged.

Even an apparently disastrous radio interview with Mr. Farage has had no impact. [Nigel Farage defends car crash interview comment that he would be concerned if Romanians moved in next door, By Richard Hartley-Parkinson, Daily Mirror, May 17, 2014] He was repeatedly questioned over his expenses in the European Parliament, and failed to give straight answers. The political and media classes visibly rubbed their hands together and pronounced that UKIP was finished—just as they insist that an appearance on BBC’s Question Time finished BNP leader Nick Griffin,

But now look at these election results.

Now let’s see what the declaration of European election results on Sunday brings.

Dr. Sean Gabb [Email him] is a writer, academic, broadcaster and Director of the Libertarian Alliance in England. His monograph Cultural Revolution, Culture War: How Conservatives Lost England, and How to Get It Back  and his  novel The Churchill Memorandum and other works can be purchased through Amazon.co.uk.  For his account of the Property and Freedom Society's 2008 conference in Bodrum, Turkey, click here. For his address to the 2009 PFS conference, “What is the Ruling Class?”, click here; for videos of the other presentations, click here.