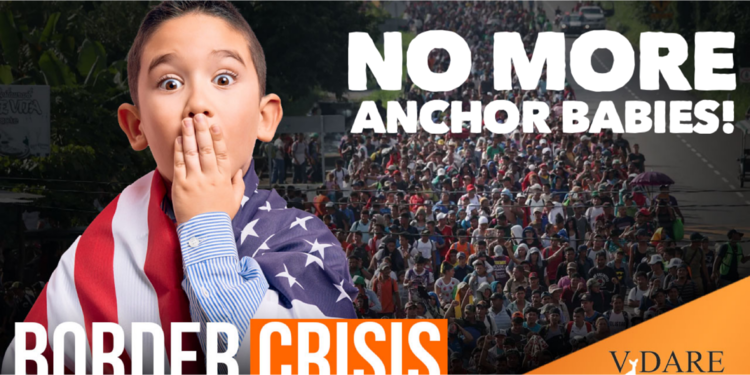 Unofficial reports say the Border Patrol detained a record  210,000 illegal aliens coming via Mexico in July. Another estimated 37,000 evaded detention. The total for the fiscal year is now well past 1 million. Whether or not the Democrats ultimately succeed in getting Amnesty for these illegals, many will give birth to “Anchor Babies” who, under current legal interpretations, will be U.S. citizens and give the illegal-alien parents a foothold to stay. That raises the crucial matter of Birthright Citizenship. Donald Trump promised to end it but did nothing. Now it is the target of legislation introduced in January by Rep, Brian Babin (R.-TX) Ending Birthright Citizenship would effectively build an internal wall, protecting the integrity of the American electorate. The GOP/GAP must make it a central plank in its 2022 and 2024 campaigns.  It’s hugely unpopular, once incredulous Americans realize that is going on. President Biden and his Treason Lobby backers must be forced to defend it.

By every metric, Biden imposed open borders on America:

The only thing the Biden administration has done to resist the invasion: keep Title 42 of the U.S. Code in place. Enacted in 1944 and used by President Trump to block the illegal entry of illegals with the WuFlu, Biden had been expected to revoke it. Apparently the latest virus panic convinced him to hold off [Title 42 Foes Go Back To Court To Try To End COVID Measure Blocking Asylum-Seekers, by Franco Ordonez, NPR, August 2, 2021].

Not that Title 42 does much. Biden has been dumping illegals with the virus into unsuspecting communities by bus and plane, in keeping with his catch-and-release policy for “family units’ and unaccompanied minors.

Given that agents have arrested well more than 1 million illegals since October 1, the beginning of fiscal 2021, the Anchor Baby problem will prove catastrophic if nothing is done. The law not only confers citizenship to children who shouldn’t be here, but effectively provides parents the means to stay. Immigration authorities can’t and won’t remove the citizen child’s parents, and then, when the child reaches adulthood, he can sponsor his illegal-alien parents’ immigration petitions [Just How Does an Anchor Baby Anchor the Illegal Alien Parent?, by David North, Center for Immigration Studies, January 16, 2011].

Of course, illegal aliens who jump the border aren’t the only source of Anchor Babies. Foreigners deliberately travel here on Tourist Visas to give birth to “American citizens,” and Biden plans to make it easier for them to scam our system. Ur Jaddou, the new chief of U.S. Citizenship and Immigration Services, defends birth tourism and claims it isn’t visa fraud. (Yes, someone named Ur Jaddou—Mexican mother, Iraqi father—is now in charge of who becomes an American) [Birth ‘tourism’ set to explode with Biden’s encouragement, by Paul Bedard, Washington Examiner, July 16, 2021].

You’re going to be allowed to come here illegally. You will not be detained. You will be provided free healthcare. Then, when your child is born, that child will be a U.S. citizen. And then guess what? They're never going to be removed.

Curiously, however, Babin didn’t issue a press release about his bill. His last statement on the issue seems to have been in 2018:

Birthright Citizenship has long served as a powerful incentive for illegal immigration, and over time has become wrongly accepted as law or protected by our constitution. However, as Birthright Citizenship is justified due to a faulty legal application and has never been protected by the Supreme Court, ending the practice should not require a constitutional amendment.

Shockingly, this is actually a deterioration from ten years ago. In 2011, some conservative senators made scrapping Birthright Citizenship a top priority. Of course, they couldn’t have gotten it passed because they didn’t have a majority of the Senate and Barack Obama was president, but they hacked away nonetheless [Tea Party Senators Target Birthright Citizenship for Immigrant Children, by Devin Dwyer, ABC News, April 5, 2011].

Opposition to Birthright Citizenship had wide support. Even Sen. John McCain was open to reviewing it [McCain backs citizenship hearings, by Manu Raju and Scott Wong, Politico, August 3, 2010]. But fervor waned until Trump ran in 2016. The future president made it a central part of his immigration agenda.

Unfortunately, Trump never acted. He occasionally suggested revoking it, for example just before the 2018 midterms through Executive Order, forcing his party to discuss the idea. It gained support from unlikely lawmakers such as Lindsey Graham. Then Trump dropped it.

As Trump understood in 2016, ending Birthright Citizenship is essential to making America great again. We won’t have a country if “tourists” and illegal aliens can simply birth “citizens” because they had the gumption to make it here and into a hospital. Anchor Babies aren’t real Americans, no matter what the law says. Ditching the policy would solve one of our biggest immigration problems.

That’s why Republicans must hit the issue hard in the coming mid-terms and 2024. Best positioned to do so are Senate candidates Mo Brooks, J.D. Vance and Blake Masters. All three can attract media attention. They think creatively about immigration. Vance, in particular, has an almost Trumpian ability to make journos lose their minds over mere tweets. Brooks has co-sponsored Babin’s bill and has amply demonstrated his immigration patriot bona fides. He only needs to champion the bill on the campaign trail. With less established records, the other two can solidify their credibility with the base.

If Republicans make Birthright Citizenship a campaign issue and take back Congress in 2022, they might just pass Babin’s bill. Biden would never sign it, but that’s not the point. Democrats always try to pass legislation despite inevitable failure on Capitol Hill or a veto threat. Then they make the legislation a campaign issue and force presidential candidates to adopt it.

Still, I believe the best hope for repealing Birthright Citizenship is through Executive Order. It doesn’t even matter if the president has the authority. Biden just extended the Eviction Moratorium despite clear court precedent that said he couldn’t [The Eviction-Moratorium Decree: Why It’s Unconstitutional, by Andrew McCarthy, National Review, August 4, 2021]. So a newly-elected GOP president in 2024 could simply order an end to Birthright Citizenship and wait to see the inevitable battle in the federal judiciary ends with the Supreme Court’s siding with him… and the Historic American Nation.

Every GOP 2024 presidential contender must promise to end Birthright Citizenship by any means necessary. But to make the issue a litmus test, immigration patriots must focus the issue now. Time is wasting. The Biden Rush could result in millions of Anchor Baby Democrats in this decade. It’s time to build that internal wall to protect the Historic American Nation.