VDARE.com has been trying to get an immigration conference together for some time. For discussions of our first and second venue cancellations under Leftist pressure, see here and here. Now, here’s the official statement on our third cancellation, in Tucson AZ:

On October 19, 2017, Hilton cancelled our contract to host our 2018 Immigration Reform Conference. After some negotiation, VDARE.com and Hilton have agreed to settle matters arising from Hilton’s termination of its contract for a five-figure sum. This settlement is satisfactory to us, and we look forward to hosting the Immigration Reform Conference at a different venue.

Of course, it’s nice to get money—and to demonstrate again that patriots have legal rights and that corporate caving to Leftist pressure has costs—but we would much prefer to have a conference. And it’s a terrible comment on the emerging Totalitarian Left’s Reign of Terror that a peaceful conference designed basically to discuss the immigration agenda of the President of the United States cannot be held in a state that he carried handily in the 2016 election. (Some small comfort is that these cancellations always produce local expressions of support from Americans who are shocked to realize that they no longer live in the Land of the Free, so they do play a cumulative educational role).

But don’t get demoralized! I expect to announce our next conference venue soon!

And I will continue until we find a solid venue to host us—or until no other venue is willing to contract with us.

I’ve gotten feedback from potential attendees suggesting that I contract with a public facility so as to invoke First Amendment protections—which is what American Renaissance now does. That is something that I continue to explore, but the Reagan Center apparently figured out a way around its First Amendment obligations to the National Policy Institute last fall and I want to be careful how much we expose ourselves. To have a venue cancel at the last minute with no financial penalty and expensive litigation as our only recourse would be a very bad scenario indeed.

Some others have suggested I wait to announce the location of the conference until the last minute, or never announce it at all, and just shuttle people from the airport without notice of their destination.

In my observation, this doesn’t always work (again, Richard Spencer’s attempts at this sort of strategy have been lessons learned at a distance) plus it’s a terrible burden to organize.

And we may decide to have another webinar.

But I want to have a conference! In a nice venue!

So, for now, I plan on continuing down this path. We may be canceled by more venues yet – although I hope not – and I’m prepared for that.

But VDARE.com isn’t going away. And the more pressure they put on us, the more inventive we will become.

For the sake of our children—mine at right, from 2017 Official Brimelow Christmas photo shoot—we won’t be silenced! 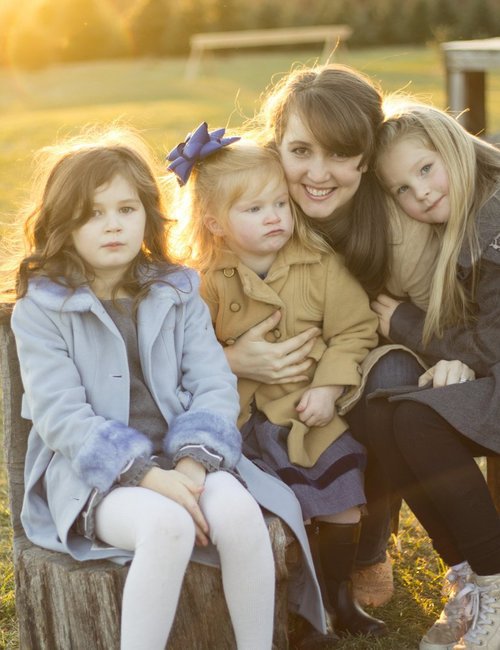 A native Texan, Lydia Brimelow [email her] graduated from Loyola University Chicago in 2006. She is fundraiser and office manager, lion tamer, fire extinguisher and miscellany handler at VDARE.com. She and Peter married in 2007 and have three daughters together. (Pictured right: Karia, Bo, Lydia, and Felicity in 2017. )