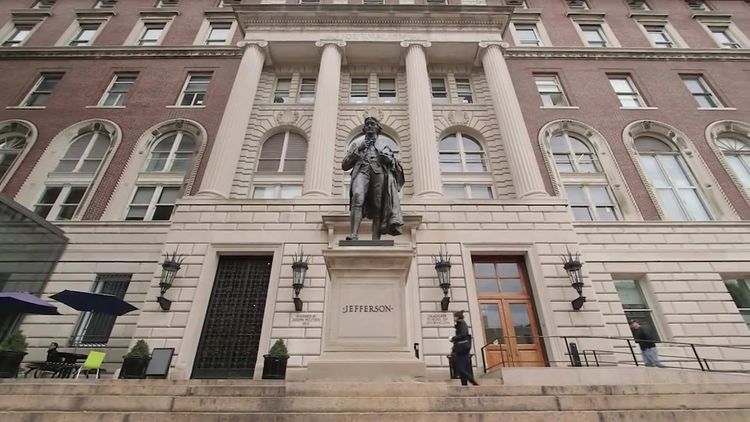 Columbia President Lee C. Bollinger's announcement that the Graduate School of Journalism will be revamped has created a stir among journalism's elites.

The preliminary conclusion: to expand the current one-year program to two years. During the first year, students will concentrate on basic skills, journalism history and literature. In the second year, students can choose special fields of study—religion, the arts, international affairs or sciences

But the task force rejected a curriculum that would include professional ethics and media criticism.

And for those of us looking for better coverage of our national question, that is bad news.

Two years ago, as part of my on-going Media Standards Project for NumbersUSA.com, I visited the Managing Editor of the Columbia Journalism Review, Brent Cunningham. [Send him email.]

One of the tools I used to evaluate fairness and balance in immigration stories was Columbia's basic journalism textbook, "News Reporting and Writing" by Melvin Mencher.

When confronted with the damning evidence of pro-immigration bias that I had compiled, Cunningham wondered if I had stacked the deck through selective choice.

I told Cunningham he could do a random Google search of immigration stories from any newspaper during any month of any year. All would reflect the same strong bias in favor of more immigration.

But my goal of having my findings published in the "Voices" guest column section of CJR was summarily rejected.

I wasn't too surprised since "Voices" is, according to the magazine, "funded in part by the Ford Foundation…"

A few months after our meeting, Cunningham wrote an article for CJR (March-April 2002) titled "The Latino Puzzle Challenges the Heartland." It confirmed what we have long known: immigration sob stories that dominate the national press are virtually co-authored by advocates for mass immigration.

Cunningham's piece focused on how the print media should deal—sensitively—with the growing Spanish-speaking population in North Carolina.

According to Cunningham, the relationship between the media and what he calls the "undocumented" Latino community got off to a nasty start.

Five years ago, the Raleigh News and Observer published a story ("Heart without a home," by Gigi Anders, March 8, 1998) about one Julio Granados that, as Cunningham puts it, "took readers into his dreams, his faith, and his fears."

Grenados' fears were justified: INS agents apparently read the story, which included details of his illegal border crossing and the address of the grocery store where he worked. Two weeks later, Granados was arrested and deported.

Now the News and Observer was in a pickle with the local illegal aliens.

CJR's Cunningham poses the exquisite dilemma thusly: "The challenge for the press – in North Carolina and elsewhere - is to integrate these new communities into their daily coverage and also cultivate the essential new readers and viewers that they represent."

Ah. And there was I thinking the "challenge" was to report the truth. How naïve of me.

The News and Observer duly set out to make amends. Veteran reporter Ned Glascock [send him email] volunteered for the "minority affairs beat," which the editors also, for some odd reason, renamed "Demographics and Culture."  Glascock later told National Public Radio (which approved) that he approached his assignment "like being a foreign correspondent…I thought, well I'm not going to Mexico for this storyline, but I'm going to go to Mexico in Durham, North Carolina."

Then Glascock did go to Mexico. Later he observed - in another approving media establishment forum - that while it's useful to be able to speak Spanish in Mexico, many Mexican Indians don't speak Spanish, either, but indigenous languages.

For his major post-Grenados make-amends series on illegals in North Carolina, Cunningham reports, Glascock "asked the Latino advocates for help." In other words, the News and Observer asked its subjects (and their mouthpieces) how they would like to be covered.

This doesn't seem to bother Cunningham. (He merely notes sympathetically that "still nursing their anger over Julio Granados, they politely declined." Poor things!)

No doubt this is because Cunningham himself turns to Hispanic professional ethnics to evaluate the American media's coverage of their client constituency.

One such professional ethic is H. Nolo Martinez, [Send him email] described as the Director of Hispanic/Latino affairs for North Carolina's Democratic Governor, Mike Easley. Martinez told Cunningham that

This appears to mean that it's not enough for reporters to speak Spanish (as the News and Observer's Glascock does): they have actually got to be Hispanic. Further buttressing this job-creation theme, Cunningham cites the experience of Frank del Olmo, an associate editor of the Los Angeles Times [Send him email.]:

"The answer, ultimately, was to simply add Spanish-speaking reporters to existing beats whose focus is finding Latino angles to everyday stories."

Keith Woods, a "diversity specialist" at the Poynter Institute, told Cunningham that stories about the rapid growth in the alien population, the overwhelmed schools and a rubella outbreak are bad journalism because, "they are the easiest stories to get at, they require the least amount of internal knowledge and understanding of the community."

Conversely, there is someone CJR's Cunningham admires: Barry Yeoman, formerly an editor for The Independent Weekly of Durham, N.C. is "[One of] the best unsung journalists working in print in the United States." Columbia also hailed Yeoman as the "essence of excellence."

Poynter's Woods admires Yeoman too: "What you see when you read his stories is a presentation of people who are people of faith, people of love, of longing…"

In other words, all the news that's fit to print. Here are links to Yeoman's immigration stories about the "undocumented" aliens of North Carolina - keep the kleenex handy:

Part I: Soul and Skin: In the Triangle's Hispanic heart, a Baptist mission learns the joys and trials of building a community, January 19, 2000

The percentage of Latinos in the Raleigh, Durham and Chapel Hill "Triangle" is a mere 6.1% But don't expect "sensitive" stories about the impact of illegal immigration on the other 93.9% of black and white Americans who have lived in the region for over 200 years.

"Minority issues" or "diversity" reporters have no place on an honest newspaper. Such assignments skew the newspaper's coverage before a word has been written.

"Reporters are tenacious in their search for facts that will give their readers information about events. And reporters have a passion for accuracy and a determination to dig out all aspects of the story."

Oh yeah? Good luck in finding those long-lost qualities in the pap that passes for immigration reporting today.