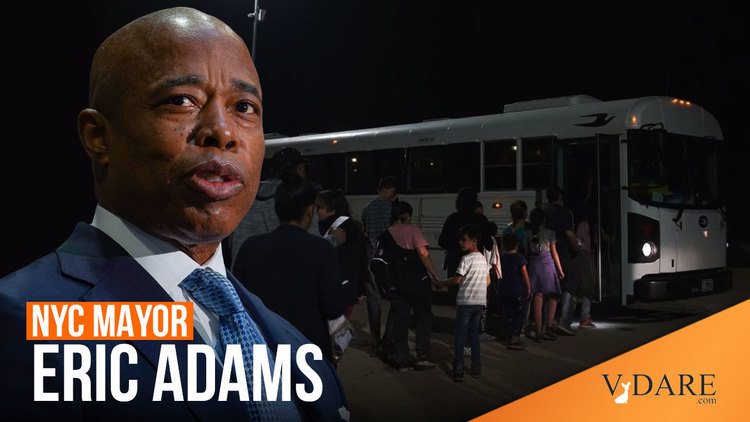 Despite Skepticism, Busing Illegals To Leftist “Sanctuary Cities” Is Working. Could It Force Biden To Do Something About Border Collapse?

The mayors of New York City and Washington, D.C., are sounding the alarm about a “migrant” aka illegal alien invasion into their cities. Eric Adams [Email him] and Muriel Bowser [Email her] want the federal government to help them with a crisis largely of Joe Biden’s making. Both accuse rogue states of fueling a nightmare. But Texas refuses to stop sending the buses and other states might follow suit. The goal: punish America’s Leftists for their treasonous Open Border policies. The controversial stunt might turn out to be the only way for Red States to force Democrats to address this issue.

New York’s and D.C.’s leaders say they love immigrants. Both proudly boast that their cities are sanctuaries for illegal aliens. “We celebrate our diversity and respect all DC residents no matter their immigration status. We are a sanctuary city because we know that our neighborhoods are safer and stronger when no one is afraid to call on our government for help, and when our police can focus on protecting and serving,” D.C.’s Mayor Bowser said after President Donald Trump was elected in 2016. Mayor Adams went the extra step of supporting a municipal bill that gave non-citizens the right to vote in city elections. “This is a great opportunity—to be a member of this great country,” he said earlier this year [Eric Adams Defends Law Allowing Noncitizens to Vote as It Takes Effect in New York, by Andrew Stanton, Newsweek, January 9, 2022].

When Texas first threatened to bus illegal aliens to blue cities, Democrats mocked the idea. They even thanked Texas for sending more of the foreigners they love. “These are all migrants who have been processed by CBP and are free to travel, so it’s nice the state of Texas is helping them get to their final destination as they await the outcome of their immigration proceedings,” then-White House press secretary Jen Psaki said of  the “migrant” buses in April [Press Briefing by Press Secretary Jen Psaki, WhiteHouse.gov, April 13, 2022].

Biden refuses to come see the mess he’s made at the border.

So Texas is bringing the border to him.https://t.co/wHZkwnD305

They’re singing a different tune now! Bowser and Adams sound surprisingly like their Republican counterparts in border states. Bowser has complained about the illegals and demanded federal resources to deal with them. In July, she attacked Texas Gov. Greg Abbott and said illegals were being “tricked” onto the buses. She insisted that local taxpayers would “not pick up the tab” [D.C. Mayor Bowser Decries Migrants Bused to Capital, by Trent Baker, Breitbart, July 17, 2022]. That seems awfully unwelcoming for a Sanctuary City. Bowser has begged for the National Guard to help, but the Pentagon rejected her plea. And she hasn’t given up [Washington, DC, mayor again asks for National Guard to be activated to assist with ‘daily arrival of migrants,’ by Paul Best, Fox News, August 11, 2022].

Adams continues to tout the Big Apple as an immigrant-friendly city even as he complains about the “migrant” influx. “People want to come to New York because this is the most diverse city in our country,” he declared in a July speech—before listing all the burdens the illegals impose on city services. In August, he called Gov. Abbott’s busing plan “horrific,” while insisting the city would continue to happily welcome “asylum seekers” [New York Mayor Eric Adams is blowing his chance to be truly welcoming to migrants, by Julio Ricardo Varela, MSNBC, August 14, 2022].

Adams also wants federal assistance, but not the National Guard. He just wants more federal money as the illegals pack New York’s homeless shelters. The city says nearly 5,000 “asylum seekers” occupy the shelters, which now suffer a shortage of space and a vacancy rate of 0.18 percent. Angry residents think foreigners who just showed up are consuming the city’s resources. The New York Times worries this influx might tarnish the city’s reputation as the “world’s sanctuary” [A Migrant Wave Tests New York City’s Identity as the World’s Sanctuary, by Andy Newman and Raúl Vilchis, August 20, 2022].

But Texas’ Abbott won’t back down. He promises to send even more buses to protest Biden’s Open Border policies. “The reason why we began putting people on buses in the first place is because the Biden Administration, they were literally dumping migrants off in small little towns of 10 or 25,000 people, and they were completely overwhelmed,” he told ABC last week. The governor’s office claims Texas has bused more than 6,500 to D.C. and New York City since April [Texas Gov. Greg Abbott doubles down on busing migrants to NYC amid feud with Mayor Eric Adams, by Deena Zaru and Sabina Ghebremedhin, August 18, 2022].

Arizona Gov. Doug Ducey is also busing illegals to the nation’s capital; since May, the total is more than 1,000 [G.O.P. Governors Cause Havoc by Busing Migrants to East Coast, by Miriam Jordan, New York Times, August 4, 2022].

Republican leaders in Florida are ready to do likewise. Florida Gov. Ron DeSantis wants to send them to Biden’s home state of Delaware, and claimed in April that the state had the funding [Florida Gov. DeSantis says funds are in place to bus illegal migrants out of his state, by Jon Brown, Fox News, April 12, 2022]. Just a few days ago, Lt. Gov. Jeannette Nuñez said the administration still plans to bus illegals to Delaware.

However, one nationality will be exempt. DeSantis’s gubernatorial campaign said Cuban illegals would be allowed to stay in Florida. That may look odd, given that a large percentage of illegals who enter the U.S. are Cuban [Lt. Gov. says DeSantis will send migrants to Delaware, but does that include Cubans?, by Cody Weddie and Chris Gothner, WPLG, August 20, 2022]. Then again, DeSantis has to keep the state’s powerful Cuban lobby happy. Thus, Florida will bus out fewer illegals than Texas and Arizona.

Thousands of migrants have been arriving in Washington, D.C., on buses sent by the governors of Texas and Arizona. With nonprofits and volunteer groups overwhelmed, many have ended up in homeless shelters and on the streets. https://t.co/AN2iRCje1M

The busing might at first have seemed counterproductive. How is it a good idea for a Republican state to pay to send illegals deeper into the country? Wouldn’t this just pass the problem on to other Americans? It appeared to be nothing more than a stunt.

But busing thousands is far more than a stunt. It’s a message, and shifts the illegal-alien burden onto the Leftists who claim to want them here. It forces the Regime Media to cover the border invasion. They can’t ignore the illegals pouring in if they’re right at their doorstep. The federal government is releasing these illegals in our country—why should rural Texas and rural Arizona, and other states, pay the bill? The feds already fly them all over the country, particularly to red states. It’s time for Treason Lobby Leftists to put their money where their mouths are and foot the bill for the problem they created.

The strategy also might just force the Biden Regime to do something at the border. If the buses keep going into D.C., New York, and other cities, the complaints from Democrats will get louder. If states send illegals to Chicago, Los Angeles, Seattle, San Francisco, and other Leftist cities, the number of angry Leftists will multiply. It’s easy to ignore the problem if it’s confined to small Texas towns. It’s harder when it’s in the biggest media markets in the country.

Another good thing: The reactions to the busing expose the hypocrisy that lies at the heart of Leftist generosity toward illegals. They’re only pro-migrant if it costs them nothing. If it increases their taxes, they’re outraged. If more “migrants” means more crime and homelessness, they grow concerned. If “migrants” keep coming to their city as part of an intentional policy, they demand closed borders around their city.

Of course, not all Leftists have adopted more sensible immigration views in response to the invasion of their communities. Activists are angry at Bowser and Adams for not being thrilled at the influx. Leftists have protested Bowser events in D.C. and demanded she pledge fealty to unlimited immigration [Protesters confront Mayor Bowser after she requests Nat. Guard help with migrants, by Nana-Sentuo Bonsu, Fox 5 DC, July 28, 2022]. “Homeless Advocates” condemned Adams for blaming “migrants” for the shelter crisis and insisted the city must throw more money at the problem [Adams Blames Migrants for Shelter Woes. Critics Say That’s Too Simple, by Jeffrey C. Mays, New York Times, July 25, 2022]. No matter how many times some Leftists are mugged by reality, they retreat to their own fantasies.

But the busing strategy has clearly made Bowser and Adams realize they can’t take an infinite number of Biden’s illegals. Maybe it will have a similar effect on the people actually in charge of federal immigration policy, whoever they are. (Is Biden really in charge?)

Republicans must keep immigration front and center in the public discussion. Democrats don’t want the public to know that record numbers of illegal are pouring through the border. In July, border agents stopped more than 199,000 illegals. Fiscal 2022 total: 1.95 million. And that’s just the ones who were apprehended.

The Leftist MSM absolutely doesn’t want to cover this. They want to help the Democrats in the midterms; focusing on the invasion gets in the way of that. It’s up to Republicans to keep this crisis in the public eye. Sending illegals to where Leftist elites live helps do that. It pushes Democrats to admit there’s a crisis. It hasn’t made them act, but a few extra busloads might change that.

Republicans must state it clearly to Biden and Big City Treason Lobby Democrats: If you want the buses to stop, then stop the invasion. It’s that simple.