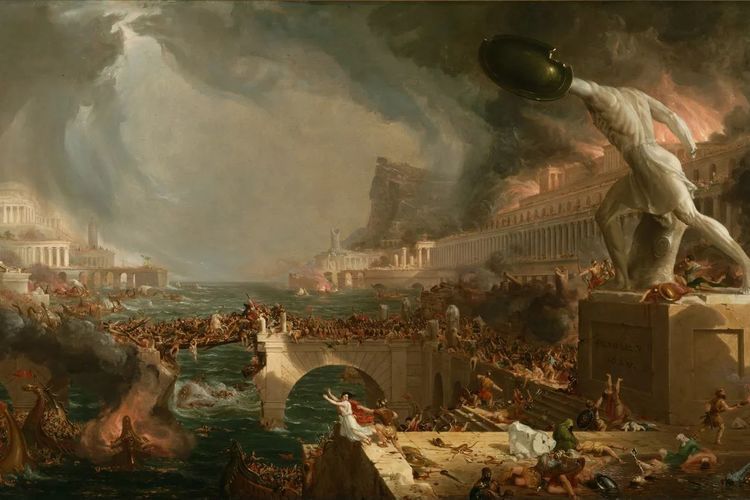 Easter and the Resurrection of the West

Chilton Williamson
A+
|
a-

Midway through the penitential season of Lent, weighed down by short days, gloomy weather, and still gloomier prognostications regarding what Pat Buchanan calls "the death of the West," I crawled down with three friends into the Grand Canyon to make a strenuous forty-five-mile hike in the bowels of the earth. Emerging nine days later, recharged by the intense physical ordeal, I boarded the America West De Haviland in Flagstaff and opened the book I had brought with me in my daypack: Hilaire Belloc's Europe and the Faith, first published in 1920, in a 1992 paperback edition by TAN.

"Now it has been the singular fortune of our European civilization," I read as the plane scraped over the pine-forested Mogollon Rim and descended above sere broken canyons to a landing in Phoenix,

"that an end did not come [at what seemed to be its final and most complete stage around the fifth century A.D.] Dissolution was in some way checked. Death was averted….

But the civilization of Europe—the civilization, that is, of Rome and of the Empire — had a third fortune differing both from death and from sterility: it survived to a resurrection. Its essential seeds were preserved for a Second Spring."

Phoenix, Arizona, doesn't much resemble a Second Rome. All the same, when I deplaned at Sky Harbor I went straight to the nearest bar to celebrate the recovery of my spirits and the possibility—however unlikely it might seem at present—of a Third Spring for the West in the twenty-first century.

The renewal of the West after "this hibernation, or sleep: this rest of the stuff of Europe" suggested to Belloc that the flux and reflux of civilization is more pulse than the steady flow that Western historians have come to expect. But it suggested something else to him as well.

Europe, Belloc recognized, though it escaped destruction in a succession of crises occurring between the fourth century A.D. and the early twentieth, only just escaped. To Hilaire Belloc's eye, the survival of what he called the European "thing" through all these crises and near-fatalities was essentially miraculous. Since Belloc considered Europe and the Faith to be one and the same thing, the explanation was logical enough to a devout Christian confident in the indestructibility of his Church. God would not—could not—let the West succumb to its enemies, because its enemies were His enemies, its people His people, its body of the same stuff as His mystical One, its future the future of His Church on earth.

Belloc's was, of course, the Catholic view of history. Yet, when we read the story of Europe, the West, Christendom—however one chooses to call it—the fact of its stubbornness, resilience, and historic good fortune seems hard to miss.

The same applies to the United States which descends culturally and genetically from Europe and has benefited—for most of its short life—from that same good fortune Bismarck had in mind when he spoke of God taking care of fools and the United States of America.

Things look—they are—bad for the West at the start of the twenty-first century. But they could be worse. History has not ended. (Including for Francis Fukuyama, who has written a new book taking it all back—most of it, anyway.) Though the "Death of the West" is a distinct possibility, its third renewal is possible too. "The future," Belloc thought, "is always a surprise."

In present circumstances, the biggest surprise—for the West as for its enemies—would be the recovery of Western nerve, the willingness to stand up for itself and its future as a unique civilization. Are there signs discernible today to indicate that such a recovery is in fact occurring? I suggest that the answer is: Yes, a few—finally!

More amazingly, European political parties and even governments appear to be responding, as in the case of Berlusconi and Bossi in Rome and Edmund Stoiber's nearly successful efforts to defeat Germany's first immigration bill.

As for the United States, September 11 seems likely to prove the end of American innocence. For decades, polls have shown Americans to be overwhelmingly in favor of vastly reducing immigration; now, a nervous and tentative rethinking of mass immigration seems to be occurring in the American establishment, as suggested by recent articles appearing in publications like The New York Review of Books and Foreign Affairs.

And, though it's probably too much to expect George W. Bush and Karl Rove to get the picture, it's beginning to look as if the rank-and-file of Republican Party officials can actually count. The close vote on 245(i) in the House suggests skepticism on the part of many. Then, of course, there's Senator Byrd's action to block 245(i) in the Senate. (Who says the only good Democrat is a dead Democrat?) Add to all this Bush's refusal to give Vicente Fox what he wanted in Monterrey last week, and it seems a certain…pattern may be developing.

Straws in the wind, perhaps. Yet people can change, including societies and—even—the politicians who beset them. Hope is a virtue.

Expect therefore a miracle—in particular on this feast of the greatest and longest-lasting of all miracles, the Resurrection of Our Lord Jesus Christ from the dead.

To that end, the editors of VDARE.COM direct their Easter prayers—and on behalf of their readers, too!

Chilton Williamson Jr. is the author of The Immigration Mystique: America's False Conscience and an editor and columnist for Chronicles Magazine, where he writes the The Hundredth Meridian column about life in the Rocky Mountain West.