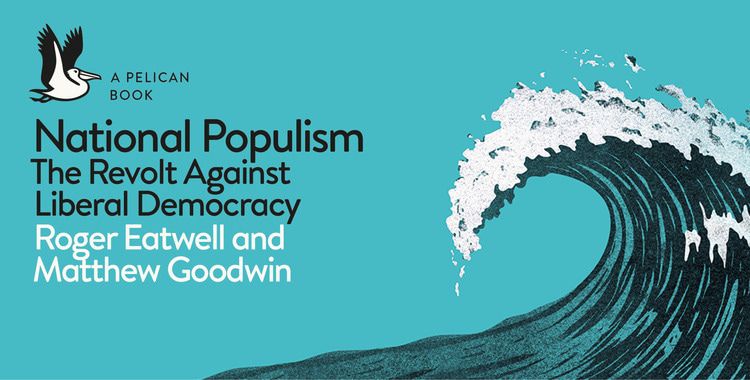 Eatwell and Goodwin’s NATIONAL POPULISM—The Revolt Is Real, And Reasonable

"Sooner or later, as the globalist elites seek to drag the country into conflicts and global commitments, preside over the economic pastoralization of the United States, manage the delegitimization of our own culture, and the dispossession of our people, and disregard or diminish our national interests and national sovereignty, a nationalist reaction is almost inevitable and will probably assume populist form when it arrives. The sooner it comes, the better." 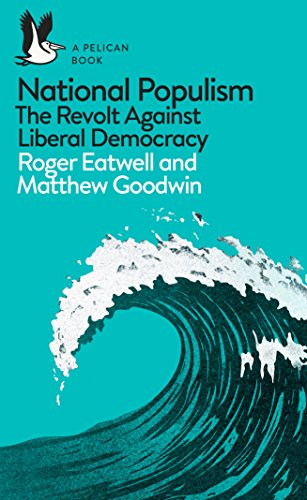 Rather, the sundry and varied movements stalking the West—and really the entire globe—are connected and symptomatic of larger economic, political and cultural dynamics largely hidden at a subterranean level within the body politic, gestating over the course of several decades and now erupting to the surface.

The collapse of the Berlin Wall and crumbling of the Soviet Union signaled the end of an extended intra-European Civil War.  The West’s victory over Marxist totalitarianism was greeted with hope—and triumphalism.  Would-be heralds and prophets proclaimed “The End of History” and the arrival of a “unipolar moment.”  “Democracy” and “capitalism” had won the day.

A new dawn of economic, political and cultural liberalization was set to rise like a Phoenix soaring from the ashes.  A New World Order was slouching forth to be born under the watchful guidance of a cosmopolitan and transnational elite.

But three decades later, what has become of this beatific vision?  The dream of a New Babel concocted in the fiery imaginations of scribblers, intellectuals, politicos and the global elites who fund them has dissolved, giving way to Donald Trump, Brexit, Matteo Salvini, Viktor Orban and Yellow Vest protests.  Globalism has run aground on the rocks of a populist-fueled nationalism.

But these are mere birth pangs, the preliminaries before the main event.  Which brings us to Eatwell and Goodwin’s second theme:

Seen from this perspective, the West stands on the cusp of a new era of political fragmentation and volatility which could turn in a variety of directions.  National Populism has serious long-term potential to exploit these cleavages and reshape global politics.

Eatwell and Goodwin offered a detailed analysis that seeks to understand their subject, not demonize it.  They smash comforting myths about National Populism and marshal copious evidence of the social, economic and political currents roiling the waters and propelling populist politics.

In the opening chapters, Eatwell and Goodwin engaged a range of comforting myths about National Populism: that Trump and Brexit voters were poor and uneducated; that the movement is merely a response to recent economic and demographic upheavals; that populist voters are angry, old, racist white men who will shortly be replaced; and that populists are anti-democratic.

But Eatwell and Goodwin reviewed postwar economic and political history, producing an array of empirical research proving that National Populism has been brewing for a long time.  They demonstrated that the political coalitions assembled by populist movements are far broader, wide-ranging and durable than critics admit.

While it is true that National Populists reject managed democracy, they are not anti-democratic. Eatwell and Goodwin showed that these movements want more tools to reflect the popular discontent with elite rule.

Eschewing the idea that populism is a mere style of politics, the authors argued that it is a thin ideology based on the three “core values”—

1) an attempt to make the popular will heard and acted on;

2) the call to defend the interests of the plain, ordinary people; and

3) the desire to replace corrupt and distant elites.

Eatwell and Goodwin define nationalism as a “belief that you are part of a group of people who share a common sense of history and identity” and “are linked by a sense of mission or project.”  Nationalism involves a desire to preserve national identity from radical change and promote the national interest.

The anxieties of National Populist voters about the scope and pace of demographic change are real and legitimate but largely ignored by cosmopolitan and uncaring elites.  Thus what VDARE.com has long called the “National Question” is the heartbeat driving populist politics.

Eatwell and Goodwin also provided a framework to understand the grievances of voters that have spawned resistance to aristocratic Global Elites.

National Populism is a reaction to the failures of globalization.  Everywhere the institutions of the “post national” WWII liberal order are failing.  Globalization hollows out and eviscerates the traditions, customs, and religions of nations and ethnic groups, creating economic, border, and cultural insecurity, threatening the very existence of discrete nation-states as cultural and political expressions of their peoples.  Such a disruptive process is bound to have political consequences.

One weakness of the book: that the authors focused almost entirely on formal politics.  But political success rests on a foundation of cultural power.

“Real power,” wrote Sam Francis, “is not limited to the control of the formal apparatus of government but extends to the levers by which human societies are controlled—to the media of communication, the means of production, and the instruments of force.”  [Beautiful Losers: Essays on the Failure of American Conservatism, 1994, p. 69]

Traditionalists and conservatives have often been too wary of wielding power in this way.  Political victories will be limited or easily reversed if the cultural hegemony of the Left is not challenged and displaced.

Hungary’s Viktor Orban provides an example to emulate.  He recognizes the political power to be gained by harnessing culture, history and civil society.

Another question for conservatives: how to adopt populist techniques in ways that advance traditionalist ends.  Conservatives value hierarchy and are generally sympathetic to “capitalism” and free markets.  But current hierarchies are often unjust and global finance capitalism produces alienation by flattening traditional social structures and institutions.  "The people” are generally more likely to be guardians of traditional values than elites, but they may need protection against the vicissitudes of predatory capitalism.

Does anyone doubt that if we actually had direct democracy on issues like trade and immigration, we’d have much better policies than we do today?  At the same time, abandoning the Electoral College in the name of “democracy,” to take just one example, would have the perverse effect of empowering out-of-touch coastal elites at the expense of Middle America.

To be worthy of its name, Conservatism must help to ensure the survival and enhancement of a particular people and its culture.  The dominant forces—the entrenched elites—in the West have no desire to do so.  Therefore, Conservatives who wish to live under those traditions must not merely oppose the dominant forces but create new ones.

Nationalists and traditional conservatives are often gloomy, lamenting a lost past and stoically looking toward a dark future.

But winning the cultural and political war requires a dose of optimism and an eschatology of victory.

Intentionally or not, Eatwell and Goodwin have produced a book that gives reasons for long-run hope.