With their own national loyalties now being openly challenged by left and right, the Likudnik neo-conservatives who have dragged this country into war are fighting back by attacking the patriotism of the real conservatives who have questioned the wisdom of going to war and exposed the neo-cons as the political poseurs they are.

But now the Likudniks have succeeded in manipulating even National Review, long the country's major conservative magazine, into serving as the launch pad for their most recent onslaught.

The attack itself is the work of David Frum, a former White House speechwriter who supposedly coined the phrase "axis of evil" for President Bush's state of the union address last year. 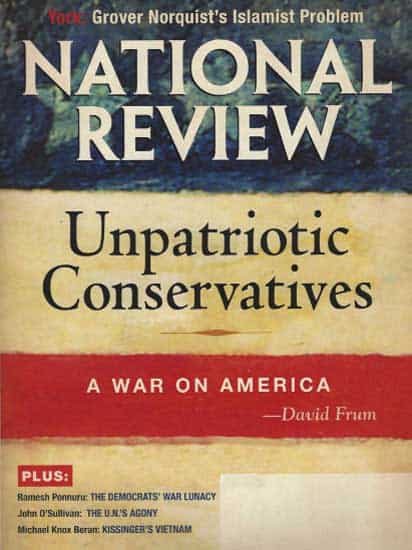 Mr. Frum has now uncovered yet another axis, no less evil in his view, in the paleo-conservatives, whom he does not hesitate to denounce as "Unpatriotic Conservatives" waging "a war against America."

That's pretty big talk, and not surprisingly Mr. Frum can't back it up. His article, in the April 7 issue of National Review, is full of factual errors and quotations torn from context and tacked onto contexts of Mr. Frum's own invention. The article has already been denounced as "incendiary" and "containing many distortions" by the president of the Philadelphia Society, a venerable conservative discussion club that Mr. Frum mentions, and the Internet is ablaze with conservative counter-attacks and satires ridiculing the ex-speech writer.

Not the least of his "distortions" is that he lumps with real paleo-conservatives (the Rockford Institute's magazine Chronicles, historian Paul Gottfried, Pat Buchanan, and yours truly) a motley crew of folks who usually agree on little except opposition to the current war. Mr. Frum's "paleos" include one establishment Republican journalist, two libertarian isolationists, one former neo-conservative, and one gentleman who as far as I know is an outright liberal and has no claim to being a conservative at all.

The quotes Mr. Frum dredges up vary from the profound to the outright silly, but not one of them substantiates his preposterous claims that the paleos are "unpatriotic," "have made common cause with the left-wing and Islamist antiwar movements in this country and in Europe," "deny and excuse terror," or "explicitly yearn for the victory of their nation's enemies," let alone his even shriller finale, that the paleos "have finished by hating their country."

Big mouth indeed from a writer whose recent book offering a self-serving account of his White House experience is described by Robert Novak (one of Mr. Frum's main targets in his attack) as "a brief for Sharon's Israeli policy." It would be nice if Mr. Frum, himself an immigrant from Canada, could decide which country is his own before he accuses others of hating theirs.

But the major problem with his attack on the paleos is that he imagines (or wants readers to imagine) that he and his neocon Likudniks are the real conservatives. The paleos around Chronicles, which remains the main paleo magazine, "advocated protectionism for American industry and restrictions on nonwhite immigration. It defended minimum-wage laws and attacked corporations that moved operations off-shore. And it championed the Southern Confederacy of the 1860s and the anti-civil rights resistance of the 1960s."

Well, in a word, yes. We did most of those things—mainly because, even though paleo-conservatism as a movement is fairly new, as conservative children of the 1960s, we learned our conservatism from the masters—at National Review itself, or an older conservative tradition with ancient and medieval roots. Protectionism wasn't much of an issue in the '60s, but it is the traditional trade policy of the Republican Party, opposed by Woodrow Wilson and Franklin Roosevelt. All conservatives supported immigration control (including restrictions to preserve the nation's ethnic balance) until the 1980s. The 1965 Immigration Act that created our current flood of Third World immigrants was a child of the Kennedy-Johnson administrations, and its Senate floor manager was Ted Kennedy.

As for the Southern Confederacy, Southern conservatives like Richard Weaver and M.E. Bradford were always welcome at National Review in better days, and several of its leading editors rejected Lincoln and his legacy. Leading conservative thinkers like Russell Kirk respected and praised the Confederacy and the Southern tradition.

It was National Review itself (along with Barry Goldwater) that championed resistance to civil rights legislation in the 1960s. "National Review believes," the magazine stated in an editorial of 1957, "that the South's premises are correct. . . . It is more important for the community, anywhere in the world, to affirm and live by civilized standards, than to bow to the demands of the numerical majority."

No one today, of course, advocates legally enforced racial segregation, but the same principle applies now as then. The point is that it's Mr. Frum and his phony neo-con cronies who have perverted, misrepresented, and abandoned the real conservative tradition. It's the paleos who guard it.

If pseudo-conservative illiterates like David Frum were the only leftists who had crept into the conservative movement's tent, we could probably live with it.

Unfortunately, National Review, by publishing his crude and flawed attack, is announcing that it's gone over to the other side.

It's sad that what was once a great and courageous magazine of the right has done so, but since it has made its choice, real conservatives must make theirs—and bid it and any "movement" it claims to lead good riddance.

[Sam Francis [email him] is a nationally syndicated columnist. A selection of his columns, America Extinguished: Mass Immigration And The Disintegration Of American Culture, is now available from Americans For Immigration Control.]