French Fight Back Against Immigrants; France Fights the French

In France, 62 percent of the population oppose the resettlement of migrants, but any resistance meets with severe repression. When he was prime minister, Manuel Valls declared tweet: “Those who refuse to welcome refugees will have to face the state.” The government is carrying out that threat. 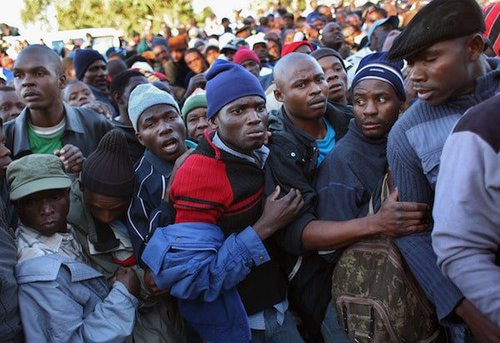 Arzon is a village of just 2,130 people on the Atlantic coast of Brittany, one of countless communities forced by the French government to accept “refugees.” (Picture right.) Last November, a Sudanese migrant in Arzon sexually assaulted a 67-year-old woman. The incident was carefully hushed up by the mainstream; only the alternative news source Breizh-Info.com reported it in an article dated November 13.

As soon as the article appeared, a call went out on social media for a demonstration to be held the next day in front of the Arzon city hall. One hundred twenty people gathered and were addressed by two men: Nicolas Faure, who runs an association for immigration control, and Roman Le Gall, who leads the Breton nationalist party Asdav.

Once they got to the migrant center, the demonstrators lit smoke bombs and tried to make their way into the center, which was heavily guarded by the gendarmerie. The authorities replied with tear gas, and the demonstrators eventually dispersed, along with two of their number who had managed to enter the center.

A message had been sent: The French don’t want immigrants and immigrants better not get out of line.

Here is a video of the incident, and here is the account in Breish-Info. TV Libertés devoted one of its programs to the demonstration.

Although the demonstration caused almost no damage (a door was broken and a pro-immigrant activist inside the center took a punch), the French government quickly arrested and charged four people. Nicolas Faure and Roman Le Gall, who addressed the demonstrators, have been charged with “organizing an undeclared demonstration,” which can carry a penalty of six months in prison and a €5,500 ($5,775) fine. Two others have been charged with entering the migrant center, one with striking the pro-immigrant staffer inside. Their trials will take place on January 19.

Problem: Nicolas Faure and Roman Le Gall didn’t organize the demonstration. The call went out on social media and was then picked up by the Agence France Presse (AFP). The two men simply answered the call.

Unfortunately, the political pressures are enormous and our Socialist government has decided to make an example of these patriots. By treating these men pitilessly the state means to crush the slightest resistance against the migrants it has forced upon all of France.

Mr. Serrand is a journalist based in Nantes, Brittany, and writes for Breizh Info. “Breizh” is the original Breton name for Brittany.