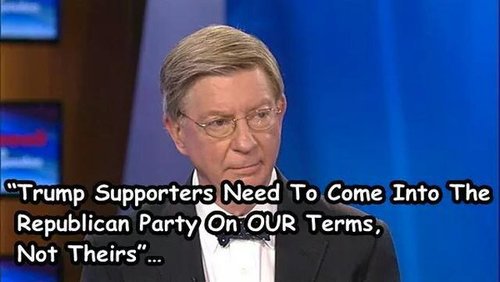 George Will Is Right—Donald Trump IS A Threat, To Cuckservatism Inc.

Just before Christmas, the Ghost of George Will Present (or whichever of his interns was writing his column that day) moaned that the real threat to American conservatism is Donald Trump: “Conservatives’ highest priority now must be to prevent Trump from winning the Republican nomination in this the GOP’s third epochal intra-party struggle in 104 years.” [Will Donald Trump End the GOP’s Role as America’ Conservative Party? National Review, December 23, 2015]. “Highest priority”? What does this say about “conservatives”—let alone Will?

Apparently Will was furious that Trump didn’t immediately denounce and condemn Vladimir Putin after he praised The Donald as “bright and talented.” It’s strange how Putin serves as a kind of trigger for the cuckservatives. The Kirkpatrick Corollary (“Republicans who fawn on Mexico want to fight Putin”) strikes again!—Will’s version of “conservatism” involves violent hostility to Orthodox Russia and a militant American stance in defense of the borders of Ukraine, but quite evidently not America’s own borders.

But what is the proud movement Trump allegedly threatens? Matthew Continetti argues:

Republican nominees since Ronald Reagan have been internationalist in outlook. They have been pro-free trade and pro-immigration, have supported American leadership in global institutions, and have argued for market solutions and traditional values. A Republican Party under Donald Trump would broadly reject this attitude. It would emphasize protection in all its forms—immigration restriction, trade duties, a fortress America approach to international relations, and activist government to address health care and veterans’ care. Paeans to freedom and opportunity and equality and small government would give way to admonishments to strive, to fight, to win, to profit.

Thus, Trump is a threat because he might end the Conservative Movement’s defense of globalism, foreign interventions and Open Borders. There's even a mention of Reagan’s disastrous 1986 Amnesty as consistent with American conservatism—an admission I would call self-discrediting from the standpoint of any meaningful attempt to conserve the country.

“I’d rather lose than win with Trump” has become the defining statement of the Beltway Right [S.E. Cupp Gets Real on Trump, GOP: We May Have to Lose This One to Ever Win Again, by Ken Meyer, Mediaite, December 11, 2015]. Bill Kristol, Christine Todd Whitman, Haley Barbour, Jeb Bush and many “Republican leaders” and “GOP Establishment donors” have reportedly stated they may not support the Republicans if Trump is the nominee, with Kristol going so far as to say a new party might be needed. As Ben Shapiro (no Trump supporter) accurately noted: “[As]s always, they care more about maintaining control of the party apparatus than about beating Hillary Clinton” [Bill Kristol: ‘We’ll have to start’ new party if Trump wins nomination, by Ben Shapiro, Breitbart, December 21, 2015]

More recently, Republican Delegate David Ramadan of Virginia, a Lebanese immigrant who spends his days worrying that his party doesn’t have enough nonwhites [David Ramadan’s American Dream, by Pooja Bhatia, Ozy, July 29, 2014] , tweeted “Our party, our rules… MORON!!” at Donald Trump after Trump condemned a “loyalty pledge” for voters who want to participate in the primary.

But quite obviously this will have the effect of discouraging independent voters and “Reagan Democrats” attracted to Trump—a strange strategy for a Republican Party which lost the state of Virginia to Obama in 2008 and 2012, blew a gubernatorial election in 2013, and lost Senate elections in 2006, 2008, 2012 and 2014.

Some naïve conservatives might respond that a Trump presidency would show insufficient attention to “limited government.”

And this was after the massive government expansion under the unified Republican government of the early George W. Bush years, and more than a half century of failed attempts to limit federal authority.

So who, exactly, cares about “limited government”?

George Will’s real concern seems to be that a President Trump would actually serve the interests of the Republican base when it comes to trade and immigration and use the power of the federal government to protect those programs Republican voters actually support, like Medicare and health care for veterans.

Will also never answers why American conservatives are morally obligated to oppose Vladimir Putin but must support “allies” such as Saudi Arabia or Turkey. As the Daily Caller’s Scott Greer observes, our “ally” Saudi Arabia funds a whole network of terrorism supporting mosques in Europe, beheads and crucifies dissidents, bans Christianity, and provides plenty of material support for Islamic radicals. He continued:

Pretty much every ally of ours in the [Middle East] region has a human rights record not worth writing home about and is prone to belligerency that harms American interests.

For instance, Turkey—the country some Republicans like Lindsey Graham praised for shooting down a Russian plane—forbids acknowledging the nation’s genocide of a million Armenians during World War I and has spent of most of its “involvement” in the fight against ISIS bombing ISIS-fighting Kurds.

Nonetheless, the Trump/Putin connection seems to have captured the meager imaginations of the Beltway Right. Even Rich Lowry looked up from playing with his Legos and watching cartoons to condemn Trump for supposedly disregarding the Constitution. Lowry kvetches:

You would be forgiven for thinking that in Trump’s world, constitutional niceties—indeed, any constraints whatsoever—are for losers. It’s only strength that matters. It shouldn’t be a surprise that he expresses admiration for Vladimir Putin, a “powerful leader” who is “highly respected within his own country and beyond.”

But Lowry admits Obama has already violated the Constitution when it comes to immigration: “Trump’s implicit promise is to respond in kind, and his supporters think it is about time,” he writes. This, we are informed, is a “loss not only for conservatism, but for the American polity.”

However, Lowry, who hasn’t exactly covered himself in glory when it comes to confronting the Left, nowhere suggests what conservatives should actually do in response to Obama’s abuses of power. Evidently, we are simply supposed to complain, invoke the memory of William F. Cuckley, and wait for the Fox limousine.

The “constitutional” answer to Obama’s excesses, of course, was impeachment—or, at the very least, using the power of the purse to withhold funding for Obama’s programs. But in Joe Sobran’s immortal phrase, the Constitution poses no serious threat to our system of government. The Constitution is only invoked by American conservatives as an excuse for inaction, used as a reason why Republicans are not allowed to pursue political victory. The Left ignores it at its leisure. And the “constitutionalists” do nothing.

Today, “intellectual conservatism” is simply a series of creative rationalizations about why the Republican Party isn’t allowed to defend the interests of its mostly white voters. At the same time, Conservatism Inc. intellectuals are eager to tell us why we are morally required to provide cheap labor to the GOP’s donors and to champion endless wars for the benefit of other peoples.

The American Conservative Movement has become, in short, a scam. And the only people who defend it are those whose livelihoods depend on it (especially the consultants and foundation heads) and those stupid enough to accept the rhetoric at face value. One suspects Will and Lowry may belong to latter category.

After decades of false hope, the conservative base is tired of failure and of being played for fools. It’s become clear that political failure is now the explicit purpose of the American Conservative Movement—not an unfortunate shortcoming. It is specifically designed to ensure the interests of ordinary Republican voters are never defended.

Rather than appealing to hoary slogans and genuflecting to self-proclaimed leaders like George Will, Donald Trump is taking his case directly to the people.

It may not be “conservative” by the Beltway Right’s standards. It may threaten those who benefit from the status quo.

But it’s populist, patriotic, and exactly what is needed if the American nation is to survive.