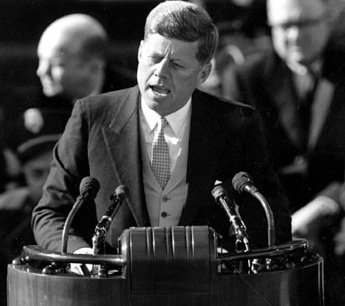 Poor Joe Biden knew he is not the man for this hour. He may be another Irish Catholic, but the Democratic brand went to hell somewhere between him and JFK.

As the spell-binding young JFK rose to give his 1961 inaugural address on TV, my Catholic mother told me that the U.S. was the best country in the world.  “Let the word go forth,” Kennedy said, “from this time and place, to friend and foe alike that the torch has been passed to a new generation of Americans—born in this century, tempered by war, disciplined by a hard and bitter peace, proud of our ancient heritage—and unwilling to witness or permit the slow undoing of those human rights to which this nation has always been committed.”

His bold domestic plans, including traveling to the moon, seem unbelievably optimistic and energetic when you think of the paralysis of today’s Democratic Party.

Many Catholics in 1961 were the middle-income descendants of recent immigrants. Though it seems like a thousand years ago, religion was still a center of most people’s lives. Divorce was rare, and it was almost universally understood that young people should be protected from the uglier features of raw sexuality. The Democratic Party Platform of 1952 had gone into great detail to praise the explosion in union membership that, it argued, had brought many Catholics into the middle class:

Democratic labor policies have rescued the wage earners in this country from mass unemployment and from sweatshop slavery at starvation wages. Self-organizations of labor unions and collective bargaining, both of which are the keystone to labor management, peace and prosperity, must be encouraged for the good of all. There can be no national prosperity unless our working men and women continue to prosper and enjoy rising living standards. Good incomes for our workers are the secret of our great and growing consumer markets.[Democratic Party Platform of 1952, July 21, 1952]

I think that most white Catholics of the ‘60s were also happy when Democratic presidents helped to end any appearance of legitimized discrimination against minorities. Rescuing protesters who risked their lives against police dogs and white mobs just to be able to get café seats showcased some Democrats as brave and visionary leaders.

But it is amazing what just a few decades have changed.

The sexual revolution championed by some modern Democrats began to look less wonderful over time. The Democratic national conventions started to imply that the No. 1 priority of Democratic women was the right to abort their children. I don’t judge other women, but many of us were repulsed by the constant impression that abortion was now the top value. And divorce and illegitimacy were soaring. At least Republicans George Sr. and Barbara Bush made one last plea for “family values.”

By 1992, platform Democrats declared that abortion “regardless of ability to pay,” was “a fundamental constitutional liberty.”

Departing from past legitimate concerns about racial justice, in 1972, the Democratic Party platform began to worry about “injustice committed against the bilingual child” in a country that had always assimilated bilingual immigrants. It suggested requiring that school children be tested in their own different languages. It advocating hiring bilingual and bicultural Spanish-speaking people at all levels of the education system.

Where had the Dems gone by 2012? Obama was making a priority of legalizing same-sex marriage. Whether or not this is a good idea is not the point. Obama was elected to fix an overwhelming economic crisis. But the Administration chose to prioritize the very liberal and divisive gay marriage issue over finishing fixing the enduring depression.

Now, unbelievably, Obama is trying to legalize a virtually unlimited number of illegal border crossers. Can you even imagine Democratic God Franklin Roosevelt harping constantly that the U.S. needed more destitute immigrants during HIS depression? In extreme contrast, Roosevelt kept in place President Hoover’s strict ban on immigrants who would be likely to “become a public charge” during the depression conditions.

And, despite a genuinely very tragic refugee crisis during WWII, large numbers of refugees were not allowed to enter the U. S. In June 1940, Roosevelt said: “Now of course, the refugee has got to be checked, because, unfortunately, among the refugees are some spies.” (Any concerns about ISIS, Joe Biden?)

Today’s politicians who say anything mildly questionable about minorities are publically shamed and fired from their jobs. A campaign by the Obama Justice Department and the Leftist Main Stream Media suggests that an army of racist cops have started shooting innocent blacks in the back. Astonishingly, the Dems now seem to be stoking the real paranoia of minorities for crass partisan gain.

Instead of furthering the traditional Democratic role of uplifting working class people, including whites, Obama merely talks about unions. Unions are so weak in the U.S. now that they are in a crisis for survival. But when Obama had the wind at his back and some ability to really act when was first elected, he did nothing that really mattered. (Even the insane current union leadership seems more worried about the welfare of illegal border crossers than the welfare of thousands of union members who have lost their jobs during the last decades.)

Yes, for white Catholics, there has been a long and steady decline from FDR and JFK to Obama/ Biden. Obama was also a great speaker. But I have already forgotten most of his words, which now sound misleading. Some white Catholics had hoped for an echo of past Democratic values in the first Obama/Biden administration.

In 2008, the Obama/ Biden ticket lost white Catholics to John McCain, but by only 5 points. In 2012, however, Obama/Biden lost the white Catholics to Mitt Romney by 19 points. In 2014, when Congress finally passed from the Democrats to the Republicans, these voters unleashed their final bitter disappointment: Democrats were favored by just 39 percent of white Catholics, the lowest ever recorded by the Pew Research Center.[ Public Sees Religion’s Influence Waning | Party Affiliation by Religion: Long-Term Trends (continued), September 24, 2014]

Biden bowed out for many reasons, but one is that his party has alienated his white Catholic base.