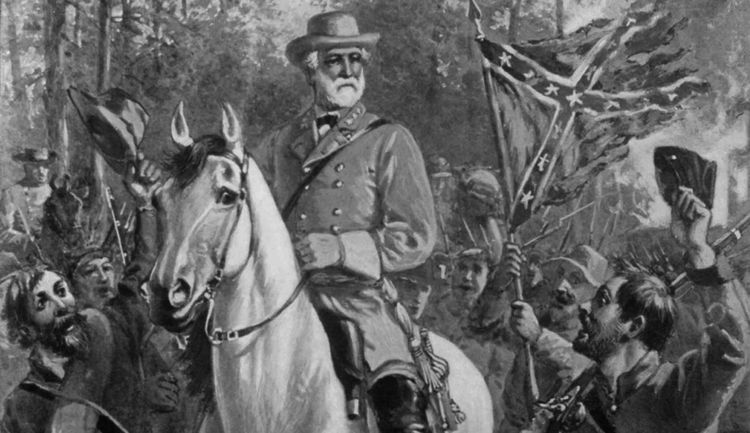 January 19th marks the 200th anniversary of the birth of Robert E. Lee, the South's most beloved hero.

Not too many years ago most Southern states honored Lee's birthday as an official state holiday. That tradition is now waning.

The enormous importance that the Mainstream Media and political leaders today give to the Martin Luther King Holiday has worked to obscure the memory of Lee.  Some states, like Mississippi, now celebrate Martin Luther King's and Lee's birthday with a state holiday honoring both men. But most Southern states, following the politically correct fashion of the times, have suppressed the memory of Lee, his exemplary character, and his devotion to the Southern cause.

Lee is still held in very high regard by most Southerners. But their political leaders have been infected with a disease that slowly dissolves their backbones. For too many of them, political correctness trumps truth and honor.

Although I would like nothing more than to see General Lee restored to a place of honor by Southern state governments and by local and national political leaders, this article will make no invidious comparisons between Lee and King. Lee would have forbidden any such discussion. His humility was such that he was embarrassed by adulation.  Following the War, when Lee was President of the college that became Washington and Lee, he forbade anyone in his presence to speak ill of his former military adversary, General Grant.

Such was the sterling character and code of honor of Robert E. Lee.  He was a just man, dedicated to high principles.

Lee's life and career left a legacy of selfless devotion to duty, honor, and people unmatched in the history of Western civilization. His was not just a military heroism, but a moral heroism. His brilliant accomplishments on the battlefield were outshone in victory and defeat by the nobility of his moral wisdom and stainless integrity. His devotion to his soldiers, his family, the Southern cause, and to God became legendary.

There are those who say that General Lee cannot be honored because he was a slave-owner. Yet Robert E. Lee set a moral example by emancipating his slaves early in the War and made sure that they had such training as to make their way as free men and women. In fact, in an 1856 letter, Lee stated that:

"In this enlightened age, there are few I believe, but what will acknowledge that slavery as an institution is a moral and political evil."

of Stonewall Jackson makes the point that Jackson cannot be understood apart from his intense Christian faith. So it is with Confederate President Jefferson Davis, scores of Confederate generals, and hundreds of thousands of Confederate soldiers in the ranks of the Southern cause. As Jackson was known for the intensity of his faith, Lee was known for the sincerity and consistency of his faith. He cannot be fully understood outside that context. Neither can the South be fully understood apart from its spiritual moorings.

In his letters, orders, short exhortations to his soldiers, and conversations, Lee made no mystery about the source of his strength.  He was not a man to foolishly rely on his own strengths and abilities.  But let General Lee tell you in his own words.

Many of Lee's present-day enemies are the very ones who should be most enthusiastic in his behalf, but they cannot hear the truth for all the politically correct shouting and bullying.

If we are to survive as a nation, these virtues and the courage to keep them must be reborn, nourished, and honored. General Lee has left us a moral heritage that must be passed to our posterity.

But I do not despair that Providence will suffer the sterling nobility of Robert E. Lee to be swept into the dustbin of history by ignorant busybodies and groveling politicians.  Lee himself might have counseled us by the words of 2 Timothy 2:3:

"Thou therefore endure hardness, as a good soldier of Jesus Christ."

Mike Scruggs [email him] is a retired financial consultant and corporate business executive. He holds an MBA from Stanford University and a BS from the University of Georgia.  He is a USAF combat veteran of the Vietnam War, holding a Distinguished Flying Cross and Purple Heart.  Until recently he was Chairman of the Board of a Classical Christian School. He lives in Hendersonville, North Carolina, and writes a weekly conservative commentary for the Asheville Tribune and the Hendersonville Tribune. He is the author of The Un-Civil War: Truths Your Teacher Never Told You.