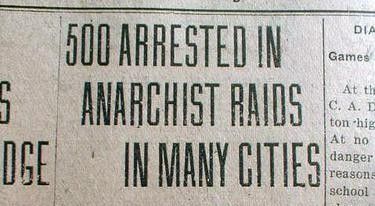 Senator Hillary Clinton's recent born-again criticism of illegal aliens has many wondering if a female Democrat in the White House might indeed enforce immigration law—if only for partisan advantage.

But what were the Palmer Raids—whose 85th anniversary took place this past Sunday, January 2nd— if not a female Democrat in the White House enforcing immigration laws for partisan advantage?

The background: President Woodrow Wilson suffered a stroke in October, 1919. First Lady Edith Bolling Wilson served as his gatekeeper for the rest of his term. So great was her influence that some historians have called her "the first woman president."

Her husband's 1916 election was the third narrowest since the Twelfth Amendment was ratified in 1803. The 1916 election also saw a one-seat Republican plurality in the House, with a slim Republican majority following in 1918.

Oh, and another detail—it's 1920, and the Constitution mandates a federal census. To reapportion that House and those Electors.

There are numerous methods to apportion Congress. At least four have been used. In the early 1900s it was done by the Webster method, or "major fractions." But whichever method is used, it all comes down to some states being rounded up, and others rounded down, to the nearest whole number.

Of course, you want your opponent's to be rounded down. A good way to do that is to arrange an undercount in as many of his states as you can. (This is one reason the Census Bureau goes to great lengths before every census to emphasize the confidentiality of their work.)

Census Day is usually set in the spring or summer, but in 1920 the date was January 1st. That's a federal holiday, so the enumerators started their work on the 2nd—the same day those other federal employees, Palmer's, went out to 33 cities. Most of them in Republican states.

Let's look at one.

Enumerator Lorenzo J. Maus hits South Church Street in Hastings, Michigan—a Republican state—on the 30th and 31st. He visits Mr. & Mrs. Ralph Kyser, their niece Leila, and newborn son Douglas. So newborn, on the 2nd, the day of the raids, that he's not supposed to be entered on the schedule, which clearly states "Omit children born after January 1." Yet he's on it anyway.

Did the family lie to Maus? Did Maus lie? Was he trying to pump up Michigan's total. (Did my dad abet him from the cradle?)

Good luck, if he was. Across the state, because of the Palmer Raids, this sort of thing was going on:

"In Detroit, 800 people were detained for six days in a dark, windowless narrow corridor. They had access to one toilet and were denied food for 24 hours."

But were these unfortunates counted? Even if they were (the law said they must be), thousands more would be hiding from the same fate and not consenting to interviews.

In Michigan in 1920, that's more than enough to have sent a Representative—and Elector—to a more Administration-friendly state, say, Alabama (or Utah, where Jewish Democrat Simon Bamberger was serving as the Mormon state's first "Gentile" governor).

This insinuation is a bit much! you might say. Mrs. Wilson was the wife of a lame duck—literally lame, nature having ended Woodrow's dream of a third term. Attorney General Palmer was simply doing his job, with the full support of both parties. There were real Reds in the country at the time. They had blown the façade off Palmer's own house seven months earlier, while he entertained guests.

Partisan political chicanery would be the last thing on their minds.

Both went on to survive over thirty ballots at the convention.

So, as Palmer and the Wilson families were carrying out the raids, they had not one but two presidential campaigns in the works.

Oh, yes—and Palmer had already served three terms in the House of Representatives, and saw the last reapportionment up close. (His state gained four seats.)

If this was an effort to boost the Democrats, did it work? The question is moot. A bipartisan coalition of rural Congressmen blocked all attempts at reapportionment, to keep the growing cities from taking away many of their districts, and the 1910 numbers were used until 1930. (That violates the Constitution, and 1920 is the only census in which that happened.)

Anyway, the GOP Elephant roared in the Twenties. Two or three extra Democrats would not have made a difference.

But they sure would now.

By the way, where was the First Lady during the 2000 Census?