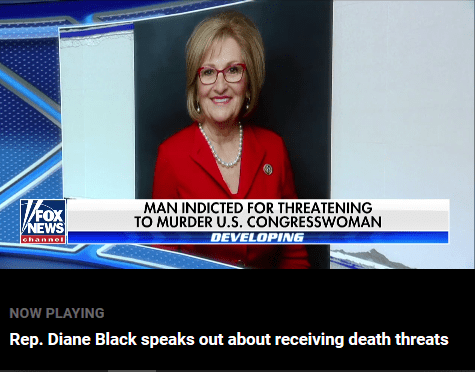 Tennessee GOP Congressman Diane Black, NumbersUSA  career grade A+,  is campaigning for the her party’s nomination for governor in this very red state. Although she has been up by as much as twenty points over her closest competitor, latest polls showed the race has tightened considerably days before the August 2 primary.  Why this has happened says a lot about the GOP Establishment’s survival plan in the Age of Trump: spend a lot of money [Spending in Tennessee's race for governor tops $50M, by Joel Ebert, Nashville Tennessean, July 27, 2018] and lie.

A year ago, when I last wrote about Congressman (she prefers this term) Black, I reported that her evolution toward immigration patriotism in a state long-dominated by “moderate” Republicans meant Trump was winning the immigration debate within the party, a truth now widely acknowledged.  My article attracted the attention of none other than Ann Coulter who tweeted that Black was her “new favorite Congressman.”

More recently, Congressman Black has been in national news because her strong stance against illegal immigration has attracted something now all too common among Open-Borders fanatics—threats of violence.

MARTHA MACCALLUM: [A] Tennessee federal grand jury has indicted a man [VDARE.com not: A white man, if you're wondering.] for threatening to kill Congresswoman Diane Black. Prosecutors say the suspect threatened to assault and murder the Tennessee Republican. The threats allegedly coming after she introduced the Border Wall Trust Fund Act which supports the president's plan…. 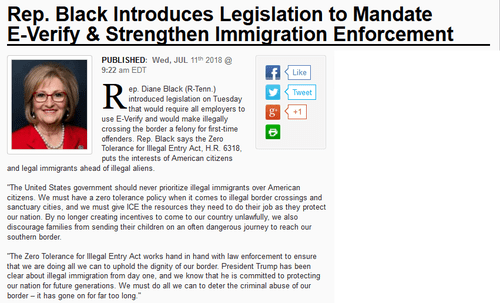 Perhaps Black’s recent Washington Examiner op-ed about set off this nutter. In it, she explained her Border Wall Trust and Zero Tolerance for Illegals Act, which makes entering the country illegally a felony—it’s currently only a misdemeanor—with a mandatory prison sentence; and redirects funds from sanctuary cities to ICE—yes, the same ICE the Left wants to abolish [Rep. Diane Black: Ending Illegal Immigration Starts with Zero Tolerance, July 17, 2018].

So how do a never-Trumper and a Chamber of Commerce RINO try to beat Black? They do it by running attack ads that feature Katie Couric asking mocking questions about building a wall across rivers (like the Rio Grande) and then editing Black’s response to make it seem as if she is saying “that won’t work” about Trump’s wall—when in reality she was referring to building the wall in a river [Boyd and Black Unleash a Flurry of Attack Ads, Tennesee Star, June 30, 2018]. They also have PACs that run ads that portray her time in Congress as something that should be loathsome to any Trump supporter, although President Trump has publicly praised Black on several occasions. The budget that Black wrote while she was Chair of the House Budget Committee funded the wall, and she voted twelve times to fund a wall and more border security before Trump was president. After the budget passed, President Trump tweeted that she “did a GREAT job in passing Budget, setting up big Tax Cuts.” [Donald Trump gives Diane Black shout out after Republican tax bill passes Congress, Staff Report, USA Today Network –Tennessee, December 20, 2017].

In other words, these “moderate” Republicans are trying to run to Black’s right—a dramatic change from the days when they were proclaiming that the GOP had to accept Amnesty to survive. And, as the Washington Post/ AP put it in announcing Pence’s endorsement of Black:

She and her three Republican opponents have gone to great lengths to heap praise on the president and are fighting over who's his most loyal supporter.

The ad offensive seems to have most benefited Lee, whose numbers were tanking among conservatives and members of the TEA Party because of his weak views on illegal immigration (and the fact that he is awful on socially conservative issues such as transgender bathrooms). In 2011, the Nashville Business Journal, quoted Lee, a construction company owner, as saying he had to “compete” against illegal labor (rather than boasting of employing it, like Jeff Flake) but gave this business-friendly spin:

He thinks “broad enforcement” is necessary to level the playing field for businesses like his that follow the rules, something reform advocates push, and is unsure that it would discourage people from coming here. At the same time, the original provisions in proposed reform pertaining to employers struck him as costly and burdensome, and he’s wary of the responsibility falling to businesses.

Lee also donated to Leftist mayor Megan Berry, who sought to make Nashville a Sanctuary City. He said that it was "a business decision”. [Bill Lee’s Contributions to Bredesen and Barry the Focus of New Billboards in Middle Tennessee, The Tennessee Star, July 11, 2018]

In contrast, Diane Black is a case study of someone who went the opposite trajectory of so many, such as Marco Rubio, who get into office professing one thing and end up buying into the DC, cocktail-circuit swamp. Her time in DC has made her more conservative on immigration issues, not less. This evolution has been long coming. When Black was in the Tennessee statehouse in 2001, she voted for a bill in favor of giving driver’s licenses to aliens. Law enforcement was in favor of the bill and made what Black called a “compelling case” that it was needed for public safety. Subsequently, she admitted her mistake and worked to repeal the law.

Back in 2016, Black wrote and passed a bill that required the Library of Congress to retain the term “illegal alien” after it had scrubbed the phrase to maintain its P.C. credentials. The truth of illegal and alien is nothing like the lie of undocumented worker. Significantly, Attorney General Jeff Sessions has now instructed the Justice Department to follow suit. [Justice Department: Use 'illegal aliens,' not 'undocumented,' by Tal Chopan, July 24, 2018]

Black’s husband, Dr. David Black, is the founder and CEO of 2nd Vote, a sort of conservative Consumer Reports. His company researches corporations to evaluate their liberal activism. Immigration is one area of focus for 2nd Vote, which might have contributed to his wife’s strong opposition to illegal immigration.

Both of the Blacks grew up poor back when poor did not mean having an iPhone 7 instead of an iPhone 10. Congressman Black lived in government housing in Baltimore; her husband says that he was so poor that his family aspired to public housing. He went from serving in combat in the Vietnam War to later becoming a world-renowned forensic toxicologist and successful businessman.

Arguably, immigration patriotism has already triumphed in this Tennessee race because the “moderates” have been forced to run scared. But we have the appalling example of Senator John (“build the dang fence”) McCain to prove that they can’t be trusted to stay scared.

Jeremiah Cicero (email him) is a very disgruntled refugee from California