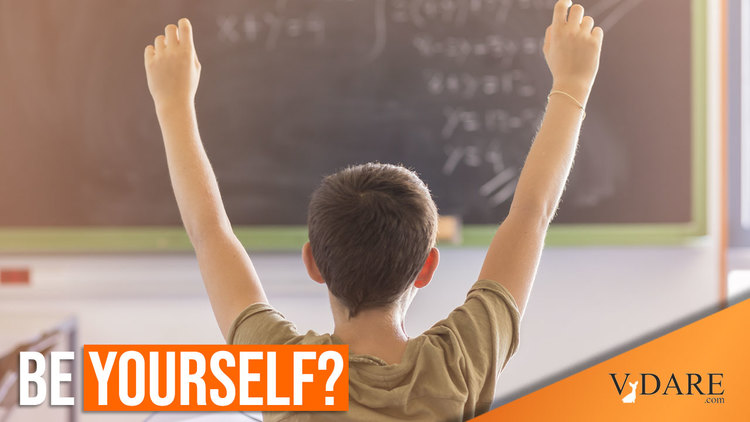 Michelle Malkin: The Illusion Of Inclusion

I have been lately contemplating the utter disingenuousness of a certain genre of "viral video." If you have had the unhealthy experience of spending any significant amount of time on social media, you'll know exactly which one I mean. It's the category of manufactured feel-good clips I will heretofore refer to as the "Different Drummer."

The newest entry into the market of internet-manufactured sensations involves a charming 12-year-old boy named Trevor Bolling from the town of Dothan, Alabama. Trevor's sixth-grade teacher posted his spontaneous outbreak of joy during the Highlands Elementary School graduation ceremony on Facebook. While the other cement-footed kids mouthed the words obligatorily to "I'm Good" by The Mowgli's and cringed in the spotlight, Trevor sang it like he meant it. He gesticulated. He waved his hands here to there. He waved 'em like he just didn't care.

The Facebook video now has more than 4.1 million views, 82,000 likes and 16,000 comments in celebration of Trevor's carefree performance. His teacher pushed out the hashtag "#BeLikeTrevor" and praised the middle schooler's independence. All hail the Different Drummer, marching to his own beat:

"It didn't matter if everyone else thought it was cool or funny," Trevor's teacher told the local Dothan Eagle newspaper. "He simply wanted to be himself, and that's what we want for our students, to be themselves. They don't have to be what they see on TikTok or other social media platforms."

A parade of Different Drummers came before Trevor. There's 6-year-old Loren Patterson from Dickson County, Tennessee, who stomped her feet and let the spirit take over at First Baptist while singing with her Sunday school classmates to Zach Williams' "Old Church Choir." Her video clip quickly racked up more than 40 million views in 2017. Then there's 5-year-old Lily from Ohio whose grandma taped her breaking free from the rest of her robotic, mortified preschool peers while unleashing her best dance moves to kids' classic "Tooty Ta." The clip topped 12 million views in 2019.

Many others have enjoyed their dizzying 15 minutes of fame, appearances on the "Today Show" and "The Tonight Show" and countless tweets of encouragement from blue-check marked celebrities toasting the kids' fearless swimming against the tide. I want to think this phenomenon is real. Truly, I want to believe. But the ice-cold reality is that our schools, Silicon Valley, Hollywood and the corporate media are deceiving these young free spirits.

Fact check: The warm, treacly embrace of the dissident is all a big lie. The pressure to conform in Black Lives Matter-genuflecting, COVID-19 hysteria-inducing, LGBTQXYZ flag-wrapped America will crush those who dare to "break through" and "stand out."

Or consider the plight of poor Caleb Kennedy, a talented 16-year-old singer from Boiling Springs, South Carolina, who had advanced to the final four on "American Idol." Like Trevor and Loren and Lily, Caleb was a born performer with a huge personality and a mullet to match. His indie spirit and musical dreams were crushed last month, however, when an old Snapchat video of him from four years ago somehow "surfaced." It showed him, age 12, sitting next to a friend dressed in a hooded costume mimicking a character from a horror movie they had just watched called "The Strangers: Prey at Night."

Somehow, the producers of the show—amplified by an all-too-eager social media mob that sees "white supremacy" in every cloud, white pillowcase and OK sign—characterized Caleb's preteen friend as a "racist, KKK" promoter and convicted poor Caleb of guilt by association. The illusion of inclusion dissolves like a mirage under scathing false accusations of racism—or any other departure from social justice orthodoxy.

Michelle Malkin [Email her] is the author of Invasion: How America Still Welcomes Terrorists, Criminals, and Other Foreign Menaces to Our Shores. Click here for Peter Brimelow’s review. Michelle Malkin is also the author of Unhinged: Exposing Liberals Gone Wild, Culture of Corruption: Obama and his Team of Tax Cheats, Crooks & Cronies, ,Who Built That: Awe-Inspiring Stories of American Tinkerpreneurs, and Sold Out: How High-Tech Billionaires & Bipartisan Beltway Crapweasels Are Screwing America's Best & Brightest Workers.

Malkin is author of the book, "Open Borders, Inc.: Who's Funding America's Destruction," available directly from VDARE.com in hardcover.

Malkin can be contacted on Twitter, Gab, and Telegram.