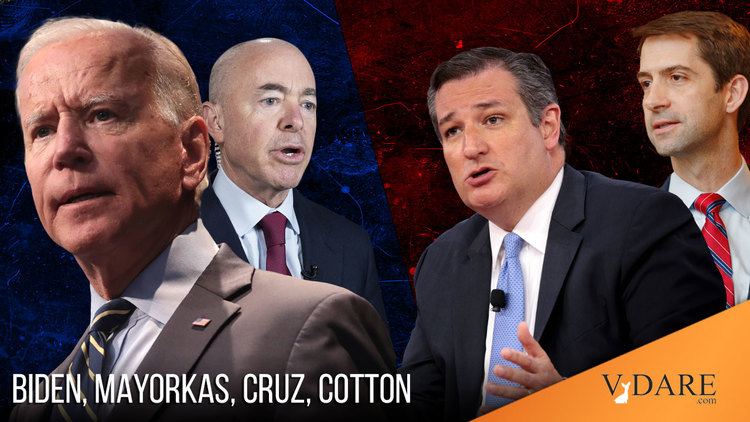 Earlier: VDARE.com’s Brimelow: “This Is A Communist Coup. But White America Is On The Move”

More evidence for the records.

Joe Biden must be impeached for this disgrace.

So many laws are being broken! https://t.co/g89vk33Fef

If Donald Trump could be impeached over a phone call, the current president can certainly be punished for systematically flouting federal immigration law.

Every week brings new reminders of the contempt that the Biden Regime shows for the law—and for the Historic American Nation. Evidence has emerged that federal officials are importing adult male illegals and flying them into the heartland, free of charge…except to taxpayers. The Regime claims it only allowed family units and unaccompanied minors into the country for chartered flights. But the video evidence shows otherwise. Any illegal—man, woman, and child—apparently has a shot at a free pass into the country. That’s a clear violation of our laws [Footage Shows Mass Release of Single Adult Migrants Into US, by Bill Melugin and Adam Shaw, Fox News, January 25, 2022].

NEW: We were on scene as ICE mass released another a large group of single adult male migrants at San Antonio airport this morning. A NGO escorted the men inside. It aired live on @FoxNews
People at the airport told us they’ve seen these mass ICE releases happening for months. pic.twitter.com/q4NtbbkIfs

The free travel itself is an abomination. Leaked video of one of these flights shows the feds refusing to give details about the illegals, and keeping local officials and police in the dark. But the localities have to deal with these new arrivals. Even the contractors charged with handling the flights think it’s outrageous. “The government is betraying the American people,” one contractor told local police in Westchester, New York [Leaked Video Reveals Joe Biden’s ‘Hush Hush’ Migrant Invasion, by Miranda Devine, New York Post, January 26, 2022].

And there are further enforcement failures. Biden has restarted Catch And Release. Now if illegals are apprehended in the country, they’re quickly freed and allowed to roam in America. They are given notices to appear in court—and that’s the extent of the reprimand they receive. Not surprisingly, the feds have lost track of tens of thousands of illegals to whom they handed notices to appear. In fact, nearly half of the illegals the government ordered to appear in court between mid-March and August 2021 did not do so. Now the feds are, allegedly, trying to find them [DHS Begins Tracking Migrants Through Phones After Losing Track of 50,000, by Anna Giaritelli, Washington Examiner, January 25, 2022].

Ludicrously, although notices do nothing to guarantee illegals appear in court, they are treated as valid ID to board one of Biden’s invasion flights. Illegals can even use deportation orders and arrest warrants as ID [TSA reveals illegal migrants flying without proper ID can use an ARREST WARRANT as identification, by Morgan Phillips, Daily Mail, January 19, 2022].

For the record, Biden released 55,000 illegals in December alone [CBP Released More than 55,000 Migrants at the Border in December, Andrew Arthur, Center for Immigration Studies, January 21, 2022].

Biden also refuses to enforce Trump’s Remain in Mexico policy, even though a federal court ordered him to do so after he tried to end it. Remain in Mexico stipulates that alleged asylum seekers must wait in Mexico while their applications are processed. Though the court order required Biden to restart the program in early December, officials have enrolled fewer than 300. That low number stands in devastating contrast to December’s 180,000 border apprehensions. It’s all too clear that Biden intends to ignore even court orders if they mean enforcing immigration law [Biden Admin Enrolled Fewer Than 300 Migrants in ‘Remain in Mexico’ in December, by Adam Shaw, Fox News, January 26, 2022].

And these are just the recent examples of Biden’s lawlessness. The human flood over our border won’t dissipate in 2022. The president refuses to stop it—because Progressive Democrats support it. The more migrants that come, the greater chance of drowning the Historic American Nation.

Biden sees how this policy polls poorly with the American public. He knows the illegals are going to continue pouring in. He simply does not care.

The only answer: Republicans must impeach Biden if and when they gain control of Congress.

To her great credit, the much-denounced Georgia Rep. Marjorie Taylor Greene very presciently drew up articles of impeachment last year. The Border Crisis constituted one of the chief elements:

[RESOLUTION Impeaching Joseph Robinette Biden, President of the United States, for endangering the security of the United[ States and countering the will of Congress and other high crimes and misdemeanors, greene.house.gov, January 21, 2021]

Ted Cruz also spelled out the legal argument for impeaching Biden earlier this month, as reported by Texas Tribune’s Allen above:

His decision to just defy federal immigration laws and allow two million people to come here unimpeded in direct contravention of his obligation under Article 2 of the Constitution to take care that the laws be faithfully executed.

They used it for partisan purposes to go after Trump because they disagreed with him. And one of the real disadvantages of doing that…is the more you weaponize it and turn it into a partisan cudgel, you know, what’s good for the goose is good for the gander.

Cruz and Cotton are powerful voices within the GOP. If they support an idea, it’s got legs.

Another sign that impeachment is possible: the Regime Media is worried. Thus Paul Waldman of the Washington Post explicitly predicts the GOP will impeach Biden in 2023. He believes that “conservative” media and Donald Trump will exert irresistible pressure to do so [Get ready: Republicans are going to impeach Joe Biden, by Paul Waldman, January 5, 2022].

And CNN claims Republicans will likely run on impeachment for the midterms [GOP plots onslaught of Biden probes in the run-up to 2024, by Melanie Zanona and Manu Raju, CNN, January 13, 2022].

Let’s hope the Regime Media is right for once.

The same goes for Vice President Kamala Harris, the Regime’s “immigration czar,” and Homeland Security secretary Alejandro Mayorkas, a Cuban-Jewish immigrant and visa fraudster. Incredibly, he has told illegals they can break our laws without fear—so long as they don’t commit a “serious crime.” That in itself is an impeachable offense.

If Republicans do take back the House, they can almost certainly impeach Biden. Only a Republican who wants to be primaried would vote No on impeachment.

Of course, in a Senate trial, the GOP would face the same problem as Democrats faced when they impeached POTUS 45: party-line Senators would not vote to convict Biden.

But in 2023, who knows what would happen in an impeachment debate? Miracles happen quite often in politics.

The knowledge that Republicans wouldn’t vote to impeach POTUS 45 did not dissuade Democrats. Nor should the converse deter the GOP.

Conviction and removing Biden isn’t the only point. So is Sending A Message—and crippling the Regime.

Republicans must show that they are serious about ending the Border Crisis. Impeaching Biden is the only way.

The good news: that may happen.