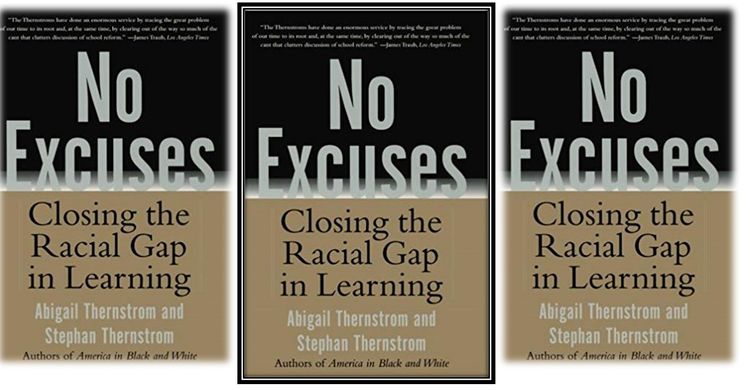 No Excuse For No Excuses

Within the claustrophobic limitations imposed by its title phrase, the new book No Excuses: Closing the Racial Gap in Learning, by conservative Harvard historian Stephan Thernstrom and his wife, Manhattan Institute think-tanker Abigail, contains much to praise. It offers detailed documentation of the size of the racial gap in school performance and of all the failed attempts to close it.

As the Thernstroms summarize starkly:

Naturally, the Conservative Establishment has duly been lavishing that praise. (Here are raves by Peter Kirsanow, Mona Charen, Thomas Sowell, Rich Lowry, and Clint Bolick.) But no one will dare explain what's fundamentally wrong with the book – except VDARE.COM and me. So I'm going to focus on why the Thernstroms' glass is half empty.

First, though, may I register a quiet scream of frustration about the new politically-correct way to color charts depicting data by race?

There are 48 charts in No Excuses. Most of them are black and white bar charts, listing test scores by ethnicity. When their bar charts display three ethnic groups, the Thernstroms use (follow me closely here):

You have to keep glancing at the key to make sense of the chart.

Apparently, the modern, sensitive chart maker can't be caught dead implying that there's any truth to the discredited old stereotype that blacks are, well, blacker than whites. But won't somebody take pity on the poor reader?

[We now return to your regularly scheduled review.]

Why does this racial learning gap exist?

The Thernstroms' basic argument is (to put it more bluntly than they would): black and Hispanic students ain't dumb—they're just lazy.

Of course, it does seem likely that how much time you spend on homework affects your achievement scores. But the Thernstroms run into a surprising amount of frustration looking for evidence that's why blacks and Hispanics lag. Thus, they admit:

"Indeed, in all three grades (fourth, eighth, and twelfth) the proportion of black and Hispanic students spending an hour or more a day on homework is slightly higher than for whites."

The Thernstroms' excuse: black kids watch a huge amount of television. So presumably they are more likely to have the TV on while they are doing their homework.

Maybe. But there's a much simpler explanation for why white kids spend no more time on their homework than black and Hispanic kids, yet score vastly higher on achievement tests: because they are, on average, according to every one of the hundreds of IQ studies, smarter.

The Thernstroms don't want to touch that tar baby with a ten-foot pole. "The racial gap is not an IQ story; this is not a book about innate intelligence," they assert on p. 4. They never return to provide any evidence to back up this audacious claim.

In fact, on pp. 130-132 (no doubt beyond where most reviewers read) the Thernstroms actually prove it is largely "an IQ story." They write:

"The racial gap in academic achievement appears very early in life—a fact that we have not touched upon in earlier chapters… But clear racial differences in intellectual development are evident by the time children first set foot in school… For example, black five- and six-year olds in the Children of the National Longitudinal Survey of Youth … scored a full standard deviation below their white peers on the Peabody Picture Vocabulary Test, a standard gauge of intellectual development for children before the age at which they can read… [O]nly one-sixth of African Americans performed as well as or better than the average white child."

The Peabody is simply a specialized verbal IQ test for the very young. It's scored on the same mean = 100 and standard deviation = 15 scale as better-known IQ tests like the Wechsler, which the Peabody correlates with. And—no surprise—it shows that, among preschoolers, there exists the same one standard deviation, 15-point white-black average gap found in IQ among adults.

And what about the new minority imported by government policy since we all started worrying about blacks—Hispanics?

Amusingly, for a book entitled No Excuses, the Thernstroms' chapter on Hispanics is mainly devoted to an excuse for the four-grade gap between whites and Hispanics: immigrant status. They write:

"Thus, the average NAEP scores for Hispanics are about as low as those for blacks, but only because the presence of so many low-scoring immigrant children pulls them down."

The Thernstroms add that, on the 1992 NAEP, "Latino immigrant children lag behind those who are second-generation or more by an average of … at least a full grade—on each test."

The obvious conclusion: shutting down immigration would have an excellent effect on Hispanic academic performance. And indeed, the Thernstroms imply that immigration restriction would help. They approvingly cite a 1980 study that:

"… sounded a prescient note of caution about the possible impact of immigration … Those Mexicans who were assimilating to the broader culture would be 'replaced by immigrants who bring in the traditional values and characteristics.'  In particular, the authors warned, a big jump in the number of immigrants with very little schooling by American standards would pose major problems for the schools that had to educate their children. That very big jump has occurred."

Yet, the Thernstroms never follow up the obvious implication: that the surest way to improve Hispanic performance would be to sharply cut back on immigration.

Further, there's a disturbing aspect that the Thernstroms try to gloss over. How well can we expect the American-born children and grandchildren of these Hispanic immigrants to do?

Unfortunately, the Thernstroms don't tell us exactly how large the gap is between whites and American-born Hispanics. So let's do some rough math. We know the average gap for all Hispanics, immigrant and non-immigrant, is four grades. Let's say those born in America score 1.4 grades better than immigrants—a generous reading of the Thernstroms' hint above about immigrants lagging "at least a full grade." And let's say half of Hispanics are immigrants and half are American-born. Then, the American-born Hispanics would still trail whites by 3.3 grade levels.

That would be equal to two-thirds of the notorious white-black gap.

On the SAT's competitor, the ACT, the white-Mexican gap is 71 percent of the white-black gap. (It's 56 percent for other Hispanics.)

IQ? The huge NSLY study run by the U.S. military, which formed the basis for The Bell Curve, found Latinos scored 14 points below whites, or 77 percent of the white-black IQ gap.

IQ reports from Latin America are not encouraging either—Richard Lynn and Tatu Vanhanen in their important book "IQ and the Wealth of Nations" found, on a scale with white Americans as 100, scores like: Mexico, 87; Ecuador, 80; Peru 90; Puerto Rico, 84; Guatemala, 79; Argentina, 96; Uruguay, 96. (Read my review for all the caveats and implications.)

Of course, it would be nice to close the racial gap in academic achievement. But nobody has any idea how to do it.

And that's true for the Thernstroms too. They excitedly report some anecdotal evidence about a few high performing charter schools. But even their anecdotes are less impressive the more you look. Their favorite example: a high-achieving fifth grade class for gifted students at an LA school taught by Rafe Esquith. But the class turns out to be half Korean!

South Korea has the second highest average IQ in the world (more than a half-standard deviation above the American average). Its citizens have the longest work-weeks in the world. South Korean students typically score at the top of the world in international achievement tests.

So Mr. Esquith gets gifted Koreans to work hard and smart. Wow!

Pollyannaish books like No Excuses encourage destructive policies. The reality is that we don't live in Lake Wobegon where all the children are above average. There will always be people who are below average. We need policies that will allow them to live decent, productive, law-abiding, and self-respecting lives. I outlined some ideas for this in my five-part VDARE.COM series "How to Help the Left Half of the Bell Curve."

Our society suffers from the "Yale or jail" myth perpetrated by what the remarkable Milwaukee School Board member John Gardner calls the "Educartel." We tell all American kids that if they don't graduate from college, they are doomed. They too often take that to mean they might as well start dealing crack right now.

Of course, there'd be more of these jobs for American youth if we stopped importing so many blue-collar workers from abroad.

And that leads to the next positive step we can take. Our schools are overstressed by students who are difficult to teach. Let's stop importing more from the rest of the world.

Serious thinking about our racial divisions is essential. But that thinking needs to be undertaken in a scientific, not a moralistic, spirit.