See also: Brimelow At NPI: Trump’s America—The Next Shoe Will Drop In 2020

Needless to say, Richard Spencer’s misjudged conclusion to his NPI conference keynote speech, “Hail Trump, Hail our People, Hail Victory,” and a few of his more juvenile supporters’ Roman salute in response, was the top Main Stream Media story for days, with even President-elect Trump being required to “disavow” the Alt Right. As Peter Brimelow made clear, VDARE.com also “disavows” this behavior. American immigration patriotism has absolutely nothing to do with Nazi ideology. Allowing the MSM to strengthen this misinterpretation is folly. But the unpleasantness at NPI and the MSM’s reaction must be set in perspective.

CNN headlined "Alt Right Founder Questions if Jews are People," which dozens of other Main Stream Media outlets repeated. But in fact Spencer had referred to Republican political consultants as “soulless Golems” without even mentioning Jews.  [SURPRISE! CNN Makes A False Claim And Press Picks It Up, by Alex Pfeiffer, Daily Caller, November 21, 2016] 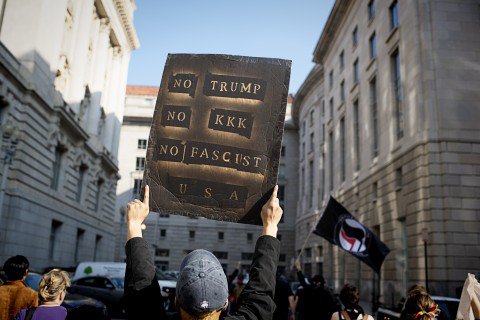 Spencer himself did not give the salute. Neither Spencer nor anyone at the conference called for violence. But there was violence—from "anti-racist" protesters relentlessly attacking NPI’s right to peacefully assemble, with minimal interference by the D.C. police or coverage from the MSM.

Moreover, despite Richard Spencer’s knack for obtaining press coverage, he is a ruthlessly marginalized figure. In an unprecedented move, the National Press Club cancelled his recent press conference. Restaurants apologize to the Left for letting him hold a private dinner. He is compelled to use expensive government buildings where he has First Amendment protection. He is banned from Twitter. Were Spencer to abandon politics and use his undeniable talents and intellect to look for a job in the private sector, he’d be frozen out from almost every white-collar job in the country.

As VDARE.com’s Brimelow pointed out, the millennial Alt Right’s flirtation with Nazi imagery is a reaction to the undeniable reality that they have absolutely nothing to lose by being reasonable and respectful when promoting their views.

So, at the end of the day, what occurred was just that someone who the MSM has already branded irredeemably racist and his followers made offensive, but harmless, comments and gestures.

In contrast, consider the MSM’s reaction to POLITICO Magazine’s national editor Michael Hirsh's tweet and Facebook post of two addresses at which he thought Spencer lived.

Actually, Spencer’s estranged wife and infant daughter occupies one of the addresses with their basset hound. Spencer apparently has not lived at the other for years i.e. Hirsh put in jeopardy some entirely innocent new tenant.

When asked his motive for posting, Hirsh responded, “I wasn’t thinking of a fucking letter. . .Our grandfathers brought baseball bats to Bund meetings. Want to join me?"

While Hirsh is not as famous as Spencer, he is a well-established MSM journalist. POLITICO is one of the most influential online political publications. It secures interviews with Presidents, Senators, Governors. Congressmen regularly write op-eds for it.

Hirsh has not apologized, but I suspect he will eventually express vague regret for his behavior, which he will call an overreaction. He will not apologize directly to Spencer, and in fact will likely denounce him in his “apology.” And within months, Hirsh will be working at another MSM outlet.

Spencer has never made anything close to this explicit call for violence. In fact, for all the screaming about the supposed torrent of hate crimes, I don’t think you can find a single Trump supporter who has done such a thing. If he did, he’d be in jail, and it would be news for weeks.

But no-one has asked the other MSM journalists who railed at Spencer over the last few days to “disavow” this call for violence. The New York Times’ token conservative Ross Douthat even seemed to endorse it

I mean some people might deserve it. I would dox Mussolini I think.

Hirsh’s threat received barely any MSM attention. Outside of conservative media it’s been primarily covered on the media blogs of CNN or the Washington Post, but not the actual news sites, much less network or cable television.

Further, while the media’s coverage of NPI focused solely on Richard Spencer’s most incendiary lines, and passed over violence by “anti-Fascist” mob, the few stories on Hirsh spend a great deal of space on how Spencer provoked him and ignore his violence.

Thus CNN’s media critic Dylan Byers said Hirsh was “encouraging people to go to his home” but failed to mention his threat to go there himself and bring baseball bats. But Byers did manage to find the space to conclude his piece by attacking Lou Dobbs:

Hirsh is not the only journalist who has posted the address of a private citizen in a way that might lead to problems for that person, though different news organizations have taken different approaches to such breaches of conduct.

Last month, Fox Business anchor Lou Dobbs tweeted a link to a post that included what were supposedly the address and phone number of Jessica Leeds, a woman who had accused Donald Trump of sexually assaulting her. (Trump has said Leeds' story is false. CNN has not independently verified her allegations against Trump.) Dobbs later apologized, writing: "My Retweet, My Mistake, My Apology to Jessica Leeds."

This tangent on Dobbs took up 105 words of a 310-word piece. If Byers’ story was your sole source, you would think that Fox gave the Trump-supporting Dobbs a slap on the wrist for the same transgression that POLITICO made Hirsh resign for. And of course, Hirsh’s victim was an (alleged) evil Nazi, while Dobbs went after an (alleged) rape victim.

But Dobbs, of course, did not call for people to show up at Leeds house with baseball bats. In fact, he simply retweeted a claim that she was tied to the Clinton Foundation, which included an image that compared a phone number in Wikileaks to her contact information. He likely didn’t even notice the personal information when he retweeted.

Dobbs may have been careless, but not malicious. And even the original tweet had a legitimate—albeit incorrect—purpose: to question   Leeds’s credibility.  [Fox Business host Lou Dobbs appears to post personal information of Trump accuser on Twitter, by Oliver Darcy, Business Insider, Oct. 13, 2016] Furthermore, it’s worth noting that Dobbs’ careless innocent mistake received far more media attention than Byers malicious call for violence.

In 2009, a bullet struck Dobbs’ own home after he’d received multiple death threats because of his opposition to (illegal) immigration. As Brenda Walker noted at the time, this received minimal MSM attention. The New York Times seemed to think it was probably a stray bullet fired by rural .Jerseyans [Lou Dobbs Says His Views Made His Home a Target, By Brian Stelter, NYT, October 30, 2009]

In his now-infamous speech, Spencer referred to the “Lügenpresse,” a term that predates Nazi Germany by more than 75 years but was used by the Third Reich among many others. It’s used today in Germany to refer to immigration enthusiasm and suppression of immigrant crime news in the (German) Main Stream Media.

The Wikipedia entry for Lying Press (as of today) says

In late 2014, the term was repopularised by the right-wing grassroots movement Pegida in response to what its protesters felt was a scornful treatment by the mainstream media, as well as biased press reporting on the rising migrant influx and other immigration issues. It was chosen to be the Un-word of the year 2014 by a panel of five linguists and journalists of the Gesellschaft für deutsche Sprache for "wholesale defamation" of the work of the media.[6] President Gauck [the current President of Germany, a largely ceremonial position] condemned the chanting of the slogan as "ahistorical nonsense", maintaining that in contrast to the Nazi and the GDR era the federal German press is not manipulative in character and "covers events mostly in a correct and balanced way".

But the New York Times predictably described this as “Nazi propaganda in the original German.” [Alt-Right Exults in Donald Trump’s Election With a Salute: ‘Heil Victory,’ by Joseph Goldstein, November 20, 2016].

(Note that this MSM report too has been significantly walked back: ‘Heil’ vs. ‘Hail’: New York Times corrects report on alt-right conference, by Erick Wemple, Washington Post, November 23, 2016)

At VDARE, we see no need to resort to German. We are very happy to quote President-elect Trump instead: 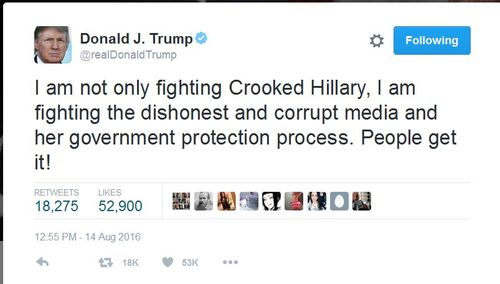 The double standards revealed by the way the MSM treated NPI in contrast Hirsh is just another example of why Trump calls them the “dishonest and corrupt media.”

Roger Dooghy (email him) is a Conservatism Inc. refugee making an honest living.