Obama and Osama: Can We Go Home Now? 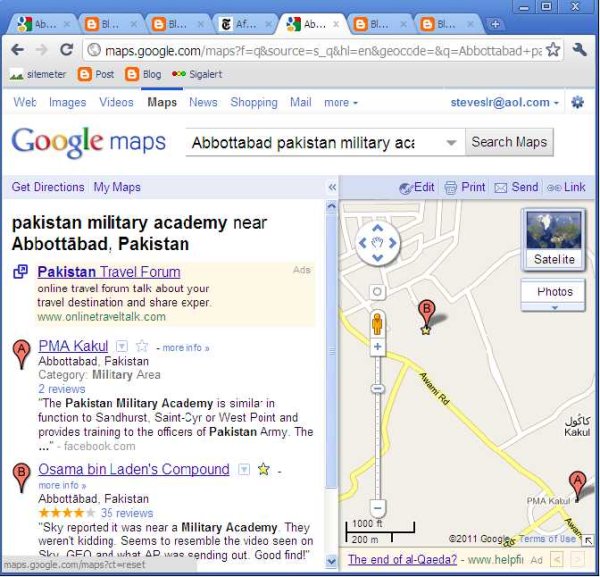 Greg Cochran called me Sunday night, and while we were saluting our brave commandos' success at wreaking vengeance on the man who killed 3,000 Americans a decade ago, we got to wondering about the place that President Obama had mentioned as bin Laden's home: Abbottabad.

I don't like unpleasant surprises, so I try to maintain a skeptical attitude. Yet, even I was shocked to learn where Osama bin Laden had been hiding: in a sizable compound constructed in 2005, right down the road from ... the Pakistan Military Academy.

(The bin Laden estate is "B" on the above Google Maps satellite photo, while the front gate of the West Point of Pakistan is "A".)

In other words, while hundreds of American soldiers have died searching for bin Laden in the mountains of the Afghanistan-Pakistan border, our purported ally Pakistan was actually hosting him in comfort at the heart of their national security apparatus.

And they were collecting billions from the American taxpayer to help track down bin Laden for us!

The behavior of the most powerful elements within Pakistan's government is more cynical, mercenary, and shameless than even I had imagined. I had assumed that Pakistan wasn't trying terribly hard to catch bin Laden and that even some within the state might be on his side. But this looks far worse. This isn't like when Saddam Hussein was captured in December 2003 in his spider hole. Osama was living large in the heart of Pakistan's security elite.

The Pakistani ruling class didn't even try to make it look like they couldn't find bin Laden.

As I may have mentioned over the years, I have had doubts about Washington's strategy of Invade the World / Invite the World. Yet this news surprised even me over how badly we had been played for suckers by the locals. We Americans are too naïve to play the Great Game. We are in over our heads.

What kind of name is "Abbottabad" anyway?

It's named after Major James Abbott of the British Army, who founded it in 1853 as a cool, lovely place for a military headquarters, which it has remained. Like Annapolis and Washington D.C. or West Point and New York City, Abbottabad is an exurb of Pakistan's capital Islamabad. In scenery, however, this small city nestled in a mountain valley at 4,000 feet more closely resembles beautiful Colorado Springs, home of the Air Force Academy.

This town of 121,000 is perhaps the nicest place to live in all of Pakistan. Osama was ensconced about a mile north of the Abbottabad Golf Club. That doesn't sound all that remarkable-until you notice that there are only 19 golf courses in Pakistan, a country of 170 million people.

Bin Laden's neighborhood in Abbottabad features numerous prestigious educational institutions besides the Pakistan Military Academy, such as Army Burn Hall College, the COMSATS Institute of Information Technology, and a campus of the NWFP University of Engineering and Technology.

Moreover, bin Laden's football field-sized compound was only a few hundred yards east of two hospitals, Jinnah and Margis Arif, which might have been convenient when he needed kidney dialysis.

This is not to say that Pakistan's latest elected officials were necessarily in on the deal. Maybe they knew about bin Laden's whereabouts, or maybe they didn't want to know. Pakistan's latest president, Asif Ali Zardari, is the widower of former Prime Minister Benazir Bhutto, who was assassinated in 2008. The U.S. blamed Al-Qaeda, but yesterday's news that Pakistan's was housing Al-Qaeda's titular leader offers another, quite different perspective on that crime.

Moreover, while we might reassure ourselves that the men who hosted bin Laden aren't the "real" rulers of Pakistan, clearly they are. Pakistan's central strategic issue for years has been: whose side are you on in the hunt for bin Laden? America's or bin Laden's? Now we know what Pakistan's actual leaders-its "deep state"-decided.

The concept of a "deep state" whose members ultimately pull the strings in a country emerged in Mediterranean countries such as Italy and Turkey after WWII. The current Turkish ruling party, which feels itself historically the victim of Turkey's inner circle, is currently trying many of its opponents in the intelligence services, military, judiciary, and organized crime on charges that they belong to an anti-democratic "state within the state."

And yet ... stuff happens. Especially in Pakistan.

Of course, stuff happens in America, too.

The bizarre announcement from the Obama Administration that bin Laden's body had already been buried at sea seems almost intended to excite suspicions. An unnamed U.S. official said this was intended to thwart bin Laden's grave from becoming a shrine. Yet the U.S. had the perfectly sensible option of burying the body, after a televised autopsy, on the world's most secure spot, the U.S. military base on the island of Diego Garcia in the center of the Indian Ocean.

If you bury him on Diego Garcia, you can always offer to exhume him and autopsy him all over again if people don't believe your story. But how do you prove your credibility after you've announced you've dumped the body in some undisclosed sea?

Granted, nobody else has publicly suggested the Diego Garcia option. But the base on Diego Garcia is never far from the minds of Pentagon officials.

With luck, Al Qaeda will officially announce bin Laden's death on their website, dispelling the disbelieving rumors that the burial at sea story will almost certainly cause to swirl throughout the Muslim world.

One minor puzzle that seems more explicable today is the timing of President Obama's release of his long form birth certificate. For several years, Obama had provoked his opponents by refusing to release his original birth certificate, thus inspiring numerous creative theories that tended to make Obama look better than his enemies.

As I pointed out in VDARE.com in 2008, the idea that Obama had been born in Kenya was always the most implausible of a host of unlikely theories circulating about the Hawaiian-born politician:

"Ever since Dan Rather tried to pawn off on the public hoax documents purportedly about George W. Bush's National Guard service, it's hard to take on faith pictures of pieces of paper. But ... has anybody advocating this actually looked at a globe and thought about what a trip from Honolulu to Nairobi would have been like on a first-generation jetliner in 1961?"

"It's especially unlikely that [Obama Sr.] would have taken his heavily pregnant bride on such a grueling trip to Kenya. ... See, back in Kenya, he already had a wife-Keiza, and two kids, Roy and Auma. His bigamous marriage to Obama's mother was a criminal act in Hawaii. Fortunately, for Barack Sr., the state of Hawaii didn't know about his other wife."

(Amusingly, just last Saturday it was finally revealed that Obama Sr. had been kicked out of Harvard in 1964 due to his polygamous ways and because he wasn't shaping up enough as a scholar to justify the expense. The Associated Press reported:

"Harvard had asked the Immigration and Naturalization Service to delay a request by Barack Hussein Obama Sr. to extend his stay in the U.S., 'until they decided what action they could take in order to get rid of him,' immigration official M.F. McKeon wrote in a June 1964 memo. Harvard administrators, the memo stated, 'were having difficulty with his financial arrangements and couldn't seem to figure out how many wives he had.'")

Since President Obama had the birth certificate all along, he could have published it whenever it would most deflate his opponents, such as right before the November 2012 election. It's easy to imagine an extremely deft politician like FDR keeping the long form certificate in his desk drawer, occasionally sliding it open to chuckle over the pie-in-the-face he was baking for his rivals.

Yet just a few days after celebrity landlord Donald Trump started complaining about it, Obama caved in. That seemed very strange at the time. I chalked it up to Obama finally running into somebody who was an even better media self-promoter. But I didn't feel terribly satisfied that I understood what was going on.

But, now, it seems plausible that Obama did it to boost his credibility before the bin Laden attack—especially if it had already been decided to arouse Muslim suspicions by dumping the body at sea.

Now the real test of Obama begins: does he have the independence of mind to use this triumph to pull America back from imperial misadventures?

In 2001, we rightly drove the Afghan government from power for the crime of hosting a declared and active enemy of the United States. But then we decided to hang around Afghanistan and try to make it less of a hellhole, which only made it more of one.

We could, for example, flatten the Pakistan Military Academy with B-2 bomber strikes.

Of course, we won't do that. Unlike Libya, which trusted America enough to give up its nuclear weapons program in 2003, Pakistan has nukes. So Pakistan can spit in our face like this.

Certainly, though, the Obama administration should withdraw its 2010 request for an additional $3 billion in aid to Pakistan.

Pakistan could react by cutting off the U.S. military's main supply route to Afghanistan. But, so what? We got bin Laden and it's time to leave Afghanistan to the Afghans.

"Will Mr. Obama have the courage to make that decision? Probably not, but this is a tremendous opportunity to change the course of the disastrous policies that have prevailed for the past ten years."

It's time for Obama to declare victory and go home.

Unfortunately, nothing in Obama's speech last time hinted at such a sensible and brave move.

But we can hope.