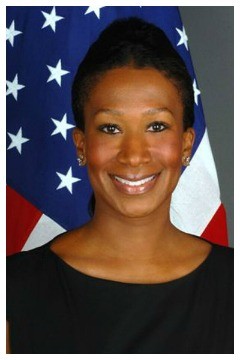 Welcome to another installment of No Obama Bundler Left Behind. This chapter stars an elite Hollywood fundraiser who scored a plum diplomatic appointment, slacked off on the job and left her public office in disgrace, and then rebounded from failure as a new Obamacare promoter. Nice crony "work" if you can get it.

This failed celebr-ambassador is Nicole Avant. Her father, Clarence Avant, is a prominent Democratic activist and music executive. Her husband, Ted Sarandos, is the chief content officer at Netflix. Her godfather is music legend Quincy Jones. On Monday, Avant turned up at an Obama administration confab with pop stars (Jennifer Hudson, Jason Derulo), comedy stars (Amy Poehler, Kal Penn, Aisha Tyler) and other assorted Beautiful People (public relations teams for Oprah Winfrey and Alicia Keys). The liberal glam squad members all have agreed to spread Obamacare propaganda to the masses.

Avant, billed as an "Obama administration veteran" by The Hollywood Reporter, represented "industry" at the Ministry of Health Care Misinformation meeting this week. The Wrap, another Hollywood gossip outlet, describes Avant as having been "tasked with helping boost Obama's relationship with Hollywood."

But what exactly has this "veteran" accomplished? What are her qualifications? How has she used taxpayer dollars, and what exactly is her "industry"?

By all appearances, the industry of Nicole Avant is Nicole Avant. The Beverly Hills socialite and "power player" has appeared in highbrow magazines like "Uptown" with glossy photo spreads of her 1-percenter mansion — designed, we must all be made aware, by Max Azria. Avant's personal website describes her as a "businesswoman," but her biography mentions no actual business. Instead, Avant exults from a privileged 90210 childhood attending "elite soirees, charitable events and political fundraisers."

Avant's official biography includes the following anecdote: "One time, when I was in grade school, I told my teacher that Gov. Jerry Brown of California had been over. She responded in disbelief, asking, 'What was the governor doing at your house?' Avant replied, 'Just talking with my dad.'"

And that brings us to Avant's "qualifications." As a member of Obama's 2008 Los Angeles fundraising team, Avant used her family connections to help drum up some $21 million in campaign cash. She and her husband drummed up at least $500,000 for the Obama campaign during the last election cycle. First lady Michelle Obama recently gushed that Avant was a "dear friend" and "pretty phenomenal woman."

Money can) buy love. And ambassadorships. In the fall of 2009, Avant was appointed ambassador to the Bahamas. The State Department inspector general, alas, didn't have the same warm, tingly feelings for Avant that the Obamas do. The IG's scathing report blasted her jet-setting tenure, which the watchdog described as "an extended period of dysfunctional leadership and mismanagement."  Avant, true to the Obama way, blamed problems "inherited" from the previous administration.

But Avant, and Avant alone, was responsible for her chronic absenteeism. She was gone from the office 276 days between September 2009 and November 2011. The IG concluded bluntly: "Her extensive travel out of country and preference to work from the ambassador's residence for a significant portion of the workday contributed to a perception of indifference. ... The frequent absences of the ambassador contributed to poor mission management."[Report in PDF]

And it was Avant's neglect of basic office maintenance and core mission work, not George W. Bush's, that led the IG to conclude that the post had produced "little political reporting or analysis on international crime, drug smuggling and illegal migration or on prevention of terrorism" under her reign. Avant chose instead to tout her "success" in hosting former basketball star and fellow Obama booster Magic Johnson on the islands to promote "business development."

It's more political patronage as usual in the era of Hope and Change. Remember when Obama the candidate once inveighed: "We need a president who will look out for the interests of hardworking families, not just their big campaign donors and corporate allies." Or when he pontificated: "It is no coincidence that the best bundlers are often granted the greatest access, and access is power in Washington." As I've chronicled throughout Obama's tenure in my columns and in "Culture of Corruption," Avant is the rule, not the exception among his class of incompetent, feather-lining bundler appointees.

No doubt the complainer in chief will dismiss any criticism of his celebr-ambassadorships-for-sale embarrassments as more "phony scandals." But the phoniest phony of them all doth protest too much.