On Both Ferguson And Amnesty, GOP Leadership Wants To Surrender To Minority Occupation Government 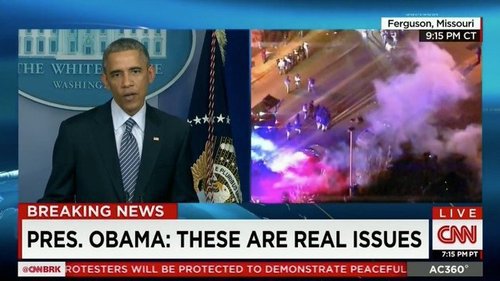 The ongoing unrest in Ferguson, Missouri and Barack Obama’s Executive Amnesty aren’t just anomalies or temporary excesses. They are indications that the U.S. is embarking on a new form of government, an ideological dictatorship based on propagating a Narrative of white oppression to justify state expansion and social control. And as much as Republicans would like to pretend otherwise, we will never be able to put issues like race relations, immigration or crime “behind us” because the Minority Occupation Government depends upon a constant escalation of racial tension.

Remarkably, even after the complete Narrative Collapse of Michael Brown as a “Gentle Giant” and the release of Officer Darren Wilson, Ferguson still may actually end up strengthening the Left. Far from being discredited, racial profiteer Al Sharpton is being fêted at the White House.

This is only the beginning. Activists who were allowed to meet with the President are also demanding increased federal oversight of local police departments, “community” oversight of police and more money for “community programs.” [6 Solutions Emerge After Young Ferguson Activists Meet With Obama, Biden & Eric Holder, by Leslie Salzillo, Daily Kos, December 1, 2014]

In real terms, this will translate into more taxpayer money being put into the hands of far Left activists and “community organizers” and more racially motivated prosecutions of white officers. The end game: for every police department in the country to look like the openly anti-white Department of Justice of Eric Holder.

In the Main Stream Media’s eyes, it is taken for granted that the grand jury made the wrong decision by not automatically indicting Darren Wilson. Far from being embarrassed at being exposed as liars, the MSM is doubling down on the Ferguson Narrative. And there is already a campaign for another grand jury to be summoned so that a different prosecutor can indict Darren Wilson. [How One Woman Could Hit the Reset Button In the Case Against Darren Wilson, by Judd Legum, Think Progress, December 2, 2014]

In an astonishing act of recklessness and cruelty, New York Times reporters even printed Officer Darren Wilson’s address information just before the grand jury’s decision was announced, as though they were actually inviting violence against the officer and his wife. [New York Times Publishes Darren Wilson’s Address Info As Ferguson Simmers, by Connor Adams Sheets, International Business Times, November 24, 2014] This tactic is known as “doxing,” and is increasingly used by “social justice warriors” against anyone who airs politically incorrect thought.

For example, a Tumblr blog called Racists Getting Fired specifically tries to track and destroy those who were angered by the rioting in Ferguson. It features Paula Deen as an example to follow. While some of these “racists” targeted undoubtedly used crude and offensive language, others targeted for destruction could only be called “racist” by a disturbed imagination.

As you might expect, the blog is run by “a woman (whose pronouns and gender id are complicated as hell.” [racists getting fired (& getting racists fired, November 29, 2014] Andrew Sullivan, bemoaning the “nasty illiberal aspect of the new identity politics,” comments that the blog shows “Brendan Eich was just the beginning.” [Getting racists fired, The Dish, December 1, 2014] And perhaps not coincidentally, reporters are taking this opportunity to campaign for the end of anonymous commenting on the Internet. [The Trolls Among Us, by Anne Applebaum, Slate, November 28, 2014]

What’s incredible is that all this is occurring as events in Ferguson are exceeding the imagination of even unhinged denizen of the “far right.”

Yet none of this seems to matter. Even the horrific murder of Bosnian immigrant Zemir Begic by hammer-wielding minority “youths” has failed to disrupt the narrative, as the media, the police hierarchy, and the politicians have all united to make sure that no one draws the correct conclusion. The Narrative is pushed from the top down and facts and evidence are less important than simply repeating a story that confirms the prejudices of the MSM.

But while many Americans are disgusted by the lies told about Officer Darren Wilson and the justification of violence in Ferguson, they lack any political representation. No Republicans have stepped forward to defend Wilson, condemn blood soaked con men like Al Sharpton, or even criticize the President on Ferguson. Instead, Republicans seem to have decided that now that they have won the last election, their best course of action is not to say or do anything.

The same is happening with immigration policy. Barack Obama’s unilateral grant of mass amnesty is widely unpopular—but it may be a fait accompli unless the conservative grassroots mobilizes. The Republican Congressional leadership has made the conscious choice not to resist the President’s actions.

Of course, this defeats the purpose of electing Republicans or, for that matter, even having a Congress in the first place. The GOP has largely handed over the government to the President, the various multicultural pressure groups, and the MSM. The apparent thinking: by doing nothing while relying on the Left constantly provoke conservatives, Republicans can keep winning elections.

Indeed, Charles Krauthammer has made this point more or less explicitly. On Monday night, Krauthammer dismissed Republican anger over the President’s Amnesty, telling conservatives to “see a psychologist.” After all, “Krauthammer pointed out that Republicans are finally ahead of Democrats in the poll of “who do you favor,” saying this would be the worst time to “blow” the new-found advantage.” [Krauthammer to GOP: ‘See a Psychiatrist’ for ‘Rage’ Over Executive Amnesty, Don’t Vote for Government Shutdown, by Al Weaver, Daily Caller, December 1, 2014]

This is a horrible situation for the historic American nation. While the Left is showing an increasing willingness to practice smashmouth politics and go after the jobs and personal lives of those it sees as enemies, the Beltway Right seems to have given up on political action altogether aside from wonkish economic issues.

Thus, even though the Ferguson Narrative of white racism has been shown to be a lie, and Barack Obama’s Executive Amnesty is unpopular and disastrous, the Left is still marching from victory to victory. Meanwhile, Conservatism Inc. is content with the perks of office and status, seemingly unconcerned about the long-term erosion of its power base and of the nation itself. See C. Krauthammer, above.

Americans concerned about their country can’t afford to be deceived. They are governed by a system just as dependent on lying propaganda and state driven hysteria as any Soviet-Era Eastern Bloc country.

And the longer this continues, the less likely it can be reformed—and the greater the change that will be required if the historic American nation is to survive.