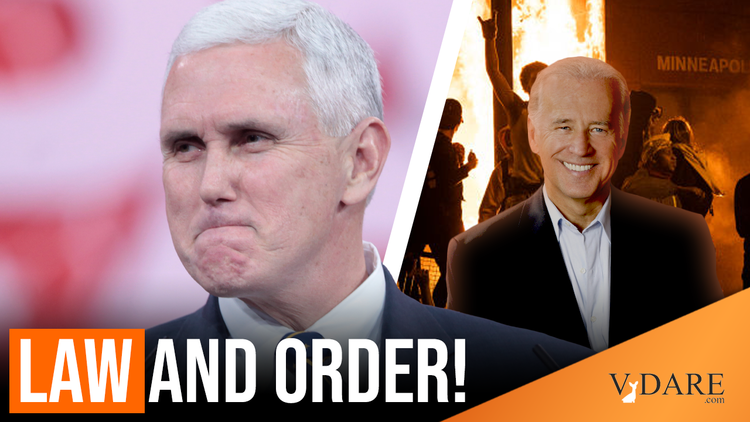 Is Joe Biden forfeiting the law-and-order issue to Donald Trump?

So it would seem.

In his address, Pence charged Biden with sinning by silence in failing to denounce the rioters, looters and arsonists who have for months attacked police and pillaged Portland, Seattle, Minneapolis, Kenosha and other cities.

Said Pence: "Last week, Joe Biden did not say one word about the violence and chaos engulfing cities across this country.

"Joe Biden would double down on the very policies that are leading to unsafe streets and violence in American cities. ... You will not be safe in Joe Biden's America." [Full Transcript]

Now, it is inexact to say Biden would "defund" the police. When the big agenda item of Black Lives Matter was first raised, Biden rushed to say he would reform the police and increase spending.

And, late Wednesday afternoon, probably after seeing an advance of Pence's speech, Biden tweeted from Delaware about the chaos that has engulfed Kenosha since Sunday night's police shooting of Jacob Blake:

"Needless violence won't heal us. We need to end the violence."

Biden's belated and tepid condemnations of the riots and pillaging of America's cities by "peaceful protesters" gone rogue night after night testifies to the dilemma in which he finds himself.

It is three months since George Floyd ceased to breathe under the knee of that Minneapolis cop. But it is also three months to the election. And the political tide is turning, visibly and hard, against the arsonists and anarchists conducting the nightly rampages against cops across America.

The weariness of the public with the riots is palpable. The claim that these are but the understandable excesses of "peaceful protests" is getting stale. And the reaction against the riots and ruin in the Black communities, for whom they are allegedly being conducted, is growing.

Black leaders in urban areas are saying we want good cops, but we also want more cops to protect our people from gun-toting gangbangers who are running up rising weekly kill rates.

Tuesday, video surfaced of a mob of radicals surrounding, berating, cursing and threatening a woman at a D.C. diner. Her crime? She had refused to submit to demands she raise her fist in a Black Power salute and proclaim, "Black Lives Matter!"

It looked like a training exercise for aspiring Nazi Brown Shirts.

We are beginning to see how this all unfolds. And from here, it looks like the Democratic left is going to be the loser on all counts.

The Biden media daily testify to its unpopularity by insisting Biden never endorsed it. Where police department budgets have been cut, shooting and homicide rates have soared. And Biden's refusal to endorse the mandate tells you what Democrats' polls are telling them.

The police bill passed by Nancy Pelosi's House featuring restrictions on chokeholds has been ignored by the Senate, and Republicans do not appear to be suffering for having ignored it.

The smashing of statues, which has escalated from Columbus to Catholic missionaries and saints, to Confederate generals and statesmen like Lee, Jackson and Jefferson Davis, to the four presidents on Mount Rushmore—Washington, Jefferson, Lincoln, TR—is now seen even by liberal elites as excessive.

Eventually, the country is going to go with law and order, for, no matter how the liberals' recoil from the phrase and its associations with Barry Goldwater and Richard Nixon, without law and order there is no justice and there is no peace. What Nixon said in '68 remains true: "The first civil right of every American is to be free from domestic violence."

The mega-demand of BLM and its collaborators—reparations for slavery and segregation—is not wildly popular. Yet, reparations, which ultimately involves trillions in wealth transfers, is an issue on which Biden will have to choose between the Bernie-BLM-AOC wing of his party and the Scranton Democrats among whom he was raised.

Are the nation's police forces shot through with systemic racism and overpopulated by white cops who relish using violence on Black folks? Or are our police the first of the first responders, the thin blue line standing between America and anarchy?

The Republicans have chosen. They stand with the cops.

And if and when Biden comes out of the basement again, he is going to have to take a stand. Declaring evenhanded neutrality won't cut it.