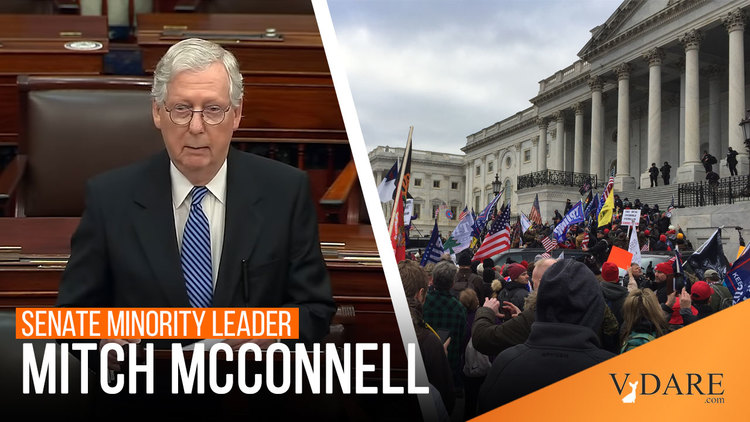 When he took the floor of the Senate to reject the Democrats' Jan. 6 Commission, Mitch McConnell may have salvaged his party's chances to recapture the House in 2022.

For that commission, being spun as a "bipartisan" effort to learn what "really happened" in the Capitol that fateful day, is a Democratic scheme to have the Left's version of events on Jan. 6 enshrined as the official history of the United States.

And what is the Left's version?

It is that the forced entry and five-hour occupation of the Capitol by hundreds of Trumpists was "an attempted coup d'etat," an "armed insurrection," an act of "domestic terrorism," the "worst attack on the Capitol since the British burned it down in the War of 1812"—and a "threat to our democracy" unrivaled since the Civil War.

Moreover, those who shouted, "Hang Mike Pence!" were out to kill the vice president to prevent his doing his duty and overseeing the count of the electoral votes that would make Joe Biden president.

And the instigation and inspiration for the assault was Donald Trump's two months of promoting the "Big Lie" that the presidential election had been "rigged" and "stolen," as was his rally speech on the Mall that day that called on his followers to march on the Capitol.

This is the party line the establishment wants written into the record as the official version of events that day.

But is that the truth, or is that a painted-up version of the truth?

While the mob that breached the Capitol in the afternoon of Jan. 6 was no "normal tourist visit," as one GOP congressman has suggested, nor was it an attempted coup or an armed insurrection.

No statue in the Capitol was pulled down, as would have been the case had antifa or BLM invaded the building. No painting was desecrated. No act of arson was committed. No gun was drawn, or brandished, or fired by Proud Boys or Oath Keepers or Trumpists within the building.

The lone victim of gunfire in the Capitol that day was an Air Force veteran with a decade of service, Ashli Babbitt, who was shot in the neck by a Capitol cop from the other side of a closed door to the speaker's chamber.

Babbitt was engaged in an unlawful act, but nothing she was trying to do justifies her being shot to death. Four months later, we still do not know the identity of the cop who killed her.

This is not to excuse what went on during that invasion of the Capitol, which was a shameful disgrace. Cops were assaulted and injured as the crowd smashed its way in. Windows were shattered. Offices, including the speaker's, were ransacked. Crimes were committed.

But the people who should sort this out and allocate blame where it belongs are police and FBI investigators and U.S. and D.C. prosecutors, not political partisans in the warring parties of a polarized nation.

Democrats had anticipated that the commission hearings would rivet the nation and media's attention all this year, with the final report coming out at year's end. This would enable the Democrats and their media allies to make Trump's actions on Jan. 6—the worst day of his presidency—and not the record of Joe Biden—the issue of 2022.

When Trump labeled this commission idea a "Democratic trap," he nailed it. Republican Senate Whip John Thune also got it right:

"Anything that gets us rehashing the 2020 election... is a day lost on being able to draw a contrast between us and the Democrats' very radical left-wing agenda."

To establish the commission, which was approved on Wednesday by the House, Senate Democrats now need to find 10 Republican votes, which, after McConnell's declared opposition, they do not have.

This "national commission" gambit is an old one in U.S. politics

Early in election year 1968, the Kerner Commission declared that white racism was the underlying cause of the Black riots.

And this has since been a recurring theme of the left.

Again, this is not to excuse what took place on Jan. 6.

But it would be folly for the GOP to cooperate in a Democratic scheme to indict the GOP and Trump presidency in the court of public opinion for abetting something close to treason, which did not happen.

The Jan. 6 national commission idea, understandably supported by every congressional Democrat, belongs in the dumpster.