Peter Brimelow Thanks VDARE.com’s Friends And Asks: Will It Come To Blood? 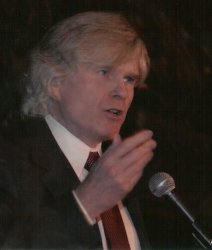 On Sunday night, we ended VDARE.com’s week-long Fall Fundraising Appeal. But some more readers gave today anyway, bless their hearts, so we’re within about $1,000 of our target of $10,000—a.k.a. 0.0001% of what President Obama and Governor Romney both raised in August (over $100 million). We hope that, as the checks snail in, the balance will be made up.

I want to thank everyone who has helped. I know that, in too many cases, they had to make real sacrifices to do so.

Fundraising is always stressful. But it is profoundly encouraging to the VDARE.com family to see former donors loyally return—and to see new donors, quite unknown to us, appear, sometimes very generously.

I believe that at VDARE.com we are, in effect, part of a process whereby Americans building new communities in the wreck of an old one—whether you regard the old community as the conservative movement, the Republican Party…or America itself.

I can't think of another issue like immigration, where the American people feel so overwhelming one way, but the American elites so hysterically and intolerantly the other. It is now twenty years since I wrote my Time To Rethink Immigration? cover story for National Review, which became my 1995 book Alien Nation.[PDF] I must admit that I never thought the reasonable arguments I presented would be met with such unscrupulous and sustained savagery—or that so many putative allies would quail and flee.

Nor did I expect that, in the third decade after the world was apparently delivered from the curse of Communism, a new form of totalitarianism—which unquestionably merits the name “Cultural Marxism”—would be spreading throughout what was formerly the free world.

The internet has given dissident publications like VDARE.com life.

But it has also made the need for VDARE.com more imperative. It has enabled Main Stream Media ideological gatekeepers to co-ordinate their political line (painfully evident in the coverage of the hapless Romney campaign) and to orchestrate hysterias, like this year’s Trayvon Martin scam, and witch hunts, like the ones that claimed the MSM careers of VDARE.com contributors Pat Buchanan and John Derbyshire.

I anticipate that this repression will increase after the Presidential election—regardless of who wins, but especially if Obama is re-elected.  I believe that the leaders of what I have called the nation of “Anti-America” are absolutely conscious that there is still time for the historic nation of America to unite, to throw off what from a demographic point of view is undeniably a Minority Occupation Government, and to stop its Electing A New People through immigration policy.

And they are absolutely determined to prevent the historic nation of America from uniting—by “any means necessary.”

I can see no other rational explanation for the MSM’s stupid and innumerate hyping of the “Hispanic” vote (here’s yet another example Vota por mi! Why the Latino vote is crucial in 2012 By Jake Tapper, Richard Coolidge & Sherisse Pham, ABC News September 24, 2012) than that it is part of deliberate strategy to distract attention from the far more important white a.k.a. American vote.

I have always expected that the historic American nation will regain control of its destiny. But I increasingly find myself remembering the last words of the harbinger of an earlier great convulsive national struggle:

"I, John Brown, am now quite certain that the crimes of this guilty land will never be purged away but with Blood. I had, as I now think, vainly flattered myself that without very much bloodshed it might be done."

I see no sign that the hysteria and intolerance of America’s elites will abate before the immigration policy to which they are so fanatically committed ends in disaster.

And, alas, on the evidence of the useless 112th Congress, I see no sign that the GOP leadership is capable of assuming the role of “GAP”—Generic American Party—proffered to it by the Tea Parties in 2010.

As a result, Romney’s share of the white vote is currently running even below McCain’s pathetic 55%. (One of the few bright spots this fall is that Conservative Establishment figures like Rush Limbaugh, Scott Rasmussen, and Richard Viguerie—and aspirants like Ben Domenech, here—recognize that the GOP leadership is ominously out of touch with its base).

Over two years ago, concluding an Emergency Appeal after a major donor had been scared into abandoning us, I wrote:

“I don't think America's post-1965 immigration disaster will end in violence (although of course there is constant under-reported violence on the Mexican border and elsewhere). “But I do now believe that achieving patriotic immigration reform will leave American politics and culture transformed much more radically, and painfully, than anyone now imagines.”

Increasingly, at VDARE.com. we will focus on the struggle to retrieve something from the wreck—for example, we will shortly run an article challenging Paul Kersey’s optimistic report of white a.k.a. American suburban secession in Atlanta by analyzing the Obama Administration’s coercive concept of “Regional Equity.”

But I must report that, twice in the last year, I have been told, quite casually and spontaneously, by perfectly responsible adults, one an older woman, that all this—America’s ongoing immigration crisis and the resultant balkanization—will come to blood.

To me, this was eerily similar to the conversation with a constituent worried about immigration that the great British parliamentarian Enoch Powell reported in his epochal 1968 speech:

I can already hear the chorus of execration. How dare I say such a horrible thing? How dare I stir up trouble and inflame feelings by repeating such a conversation? The answer is that I do not have the right not to do so. Here is a decent, ordinary fellow Englishman, who in broad daylight in my own town says to me, his Member of Parliament, that this country will not be worth living in for his children. I simply do not have the right to shrug my shoulders and think about something else.

And I say that at VDARE.com does not have the right to remain silent—and will not, as long as you continue to support us.

Peter Brimelow (email him) is editor of VDARE.COM and author of the much-denounced Alien Nation.[PDF] (Random House - 1995) and The Worm in the Apple (HarperCollins - 2003)