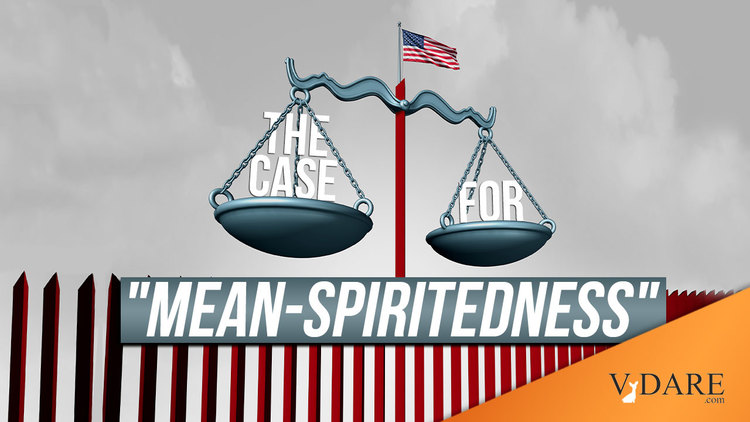 Earlier (or 20 years later) NYT Complains Trump Doesn't Respect the Narrative: "Under His Presidency, the American Dream Would be Primarily Reserved for Americans." and Is Trump Un-American for Saying Americans Have a RIGHT to Choose Which Immigrants We Want?  both from 2016

James Fulford writes: VDARE.com Editor Peter Brimelow published this in the pages of the Washington Post more than 25 years ago. It's still on their website. Also on their website: savage attacks on Lawrence Kudlow for inviting Brimelow to his birthday party.

Brimelow's views on immigration haven't changed any. They're still in line with what the majority of Americans feel about immigration. But since then, the Post, and the Democratic Party, have moved far to the anti-American Left.

As for "mean-spiritedness" (which here means the opposite of "compassionate") it's a standard tactic of the Left to say that not giving into their demands would cruel to someone. In this case, that would be (a) illegal immigrants and (b) prospective legal immigrants, I.E. anyone in the world who wants to come to America.

The immigration issue is on the move. At last. Future historians will wonder what took it so long. "We are transforming ourselves," Immigration and Naturalization Service Commissioner Doris Meissner has said, approvingly. But no one bothered to consult "we."

This fall, however, bills authored by both Sen. Alan Simpson (R-Wyo.) and Rep. Lamar Smith (R-Tex.) mark an historic watershed: Both propose the first reduction in the legal influx since the 1965 Immigration Act restarted mass immigration, quite accidentally, after the four-decade mid-century lull.

Official Washington is used to being told that it is out of touch with the rest of the country. But on the immigration issue, professional politicians are showing a touching bipartisan willingness to Get It. Even President Clinton initially endorsed the findings of the recent U.S. Commission on Immigration Reform headed by former liberal congresswoman Barbara Jordan, which concluded in effect that the system was broke and that legal immigration should be reduced.

The problem is what might be called the political intelligentsia—reporters and media commentators; assorted policy wonks and ideologues in foundations and universities. By continuing to bang the drum for the glories of immigration in principle, rather than facing the anomalies of immigration in practice, this powerful group can intimidate the professional politicians and ensure that the national debate in key respects remains paralyzed by emotion. Combined with the usual ethnic and special-interest lobbying, this means there's still a significant chance that real immigration reform will not, in the end, be passed by this Congress. The marks of this paralysis can already be seen in the current proposals. Both the bills and the Jordan Commission have considerable difficulty in figuring out a practical way to reduce the legal immigration numbers. (In 1994, there were about 800,000 legal immigrants—not counting 150,000 asylum applicants, most of whom will never leave.) Major portions of the current influx—reunification of close family members and refugees—have been assumed to be sacrosanct.

For years any discussion of reducing legal immigration was smothered with the blanket accusation of racism because the 1965 Act had effectively choked off Europe and skewed admissions to a handful of countries in the Third World. Now that this restriction is finally being debated, any effort to make it substantive is met with another accusation: "mean-spiritedness." Who, after all, could possibly be against reuniting families?

One result is that current proposals are forced to freeze or cut the already small skilled immigration category, which constitutes about 15 percent of legal immigration. But this is the only type of immigration that can be shown to be of economic benefit to the American native-born. (In a recent article in the Journal of Economic Perspectives, Prof. George J. Borjas of the University of California, San Diego, [PDF] estimated the benefit to native-born Americans from the presence of nearly 20 million immigrants is nugatory—maybe one-tenth of one percent of GDP—because the influx has been so unskilled.) And threatening skilled immigration is bound to galvanize blind business opposition to any reform.

Why should the policy of close family reunification be regarded as unquestionable? These families were not broken up by some natural disaster. One spouse simply came here voluntarily. The family could be reunited by that spouse returning home. Moreover, some of these "families" were never united in the first place. An immigrant who, after immigration, selects a spouse from back in the old country, benefits from the "reunification" preference too.

Indeed, this must also be happening in the highest preference category for immigration: spouses and minor children of American citizens (about 200,000 in 1994). Sounds romantic—Yank at Oxford marries Indian maharajah. But in fact some proportion of that inflow is due, not to native-born Americans, but to immigrants who have simply graduated to citizenship, by fulfilling the five-year waiting period and other minimal requirements, and then imported a family.

How many? As usual, no one knows. But assuming naturalized citizens sponsor close family members at about the same rate as legal permanent residents, it could easily be half. Obviously, naturalized are not on the same moral footing as native-born citizens when it comes to importing spouses. The law should distinguish between them.

For that matter, what about the moral footing of much of that backlog for spouses and children of permanent residents? An estimated 80 percent of them are sponsored by the illegal immigrants who were amnestied under the 1986 Immigration Reform and Control Act. Under the Jordan proposal, these amnestied illegals are to be rewarded—for a second time—for breaking American law.

And why should the United States take in refugees? "It's the American tradition." is the standard reply. But it's not. The 1798 Alien and Sedition Acts were passed partly because of fear of refugees from the French Revolution. Historically, few immigrants have come to America as a result of political disruption at home, contrary to myth. There was no explicit recognition of refugees in U.S. law until select groups were admitted after World War II. The United States did not acquire a comprehensive refugee policy until the 1980 Refugee Act.

The idea that the United States should be sort of an international Kleenex mopping up the blood spilled in foreign conflicts is completely new. In reality, the refugee program is a subsidized, expedited immigration program for politically favored groups. For example, about 40 percent of the 110,000 refugees in 1994 came from the former Soviet Union, mostly Jews whom the United States is obliged to accept automatically as refugees (along with Ukrainian Catholics and Pentecostals) under the so-called Lautenberg amendment. Almost none of these were from the 2 million people displaced by post-communist conflicts in the former Soviet Union and identified as refugees by the United Nations.

These "refugees" are immediately eligible for welfare and tend to stay on it (welfare participation among ex-Soviets is more than 16 percent, compared to about 7 percent for native-born Americans, according to Borjas). Ironically, immigration enthusiasts often cite this in excusing the high immigrant welfare participation rate (9 percent overall). Somehow, they never suggest abolishing the refugee category altogether. Such unsentimental questioning of immigration policy does not sound nice. But after a 30-year immigration binge, the United States is running out of nice options.

Hence the ultimate "mean-spirited" thought: Whose country is it anyway? Immigration is a classic example of the type of policy where A and B get together to decide what C should do for D. In this case, C is our children and D is a group of foreigners. If the transformation of America continues, our children will bear the brunt.

Which suggests a new definition of "mean spirited" person: in immigration policy, one who considers the national interest.