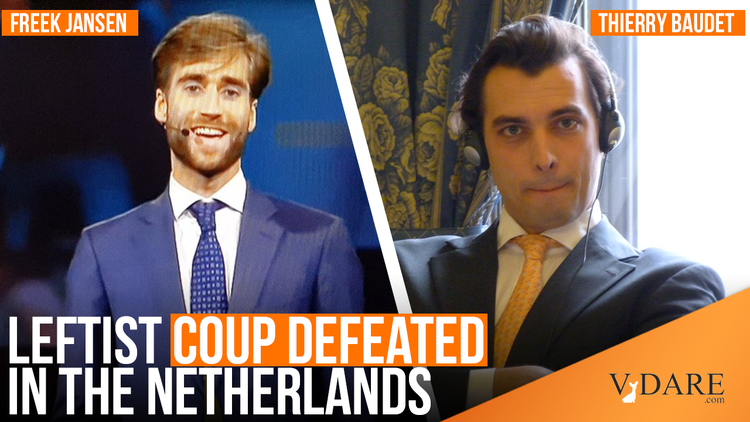 The Dutch populist anti-immigration leader Thierry Baudet has beaten back a media-orchestrated coup attempt that (not for the first time in the Netherlands) stampeded his more cucked followers. After a tumultuous two weeks, 75% of the members of the Forum for Democracy Party (FvD) voted to keep Baudet as leader. Despite Main Stream Media gloating, [Is reckless populism fading with Trump's defeat?, By Gwynne Dyer, Jerusalem Post, December 14, 2020]populism and nationalism are still alive post-Trump.

The Party’s Board of Directors met the next day to demand Freek Jansen’s resignation. Annabel Nanninga [Tweet her] the Forum’s prominent representative on the Amsterdam City Council, even demanded that the whole Youth Wing be disbanded [Baudet under fire as row in FvD over racist messages erupts on social media, DutchNews.nl, November 23, 2020]. The implication of that demand was obvious. Baudet and Jansen are close. If the one went, the other would follow.

Baudet’s reaction to the coup attempt stunned both the media and his rivals within the party. In the first place, he underscored his loyalty to Freek Jansen with a public, warm support at the emergency party top meeting. He defended the app group as a place where members could push the limits of a political discussion.

In the second place, he announced that he was willing to resign as party chairman and not stand for the Parliamentary elections next March. [Baudet stapt op als lijsttrekker Forum voor Democratie, Joop, November 23, 2020]But this turned out to be a clever political move. It mobilized the base of the party. Baudet’s opportunistic opponents could not produce an alternative leader. Baudet then asked for a referendum. He won it handily.

Of course, the attempted coup has obviously damaged the Party. A host of Forum for Democracy representatives in the European Parliament, the Dutch Upper Chamber and provincial legislatures have declared themselves independent [ Dutch populist Baudet wins vote to remain party leader , theeagle.com, December 4, 2020]. But the base remains solidly behind Baudet.

Thierry Baudet is not as well known outside the Netherlands as Geert Wilders, leader of the largest immigration, patriot party in the Dutch Parliament. Wilders has been an important player in Dutch politics since his “Party for Freedom” won nine seats in the 2006 Parliamentary elections. After the assassination of immigration patriot Pim Fortuyn in 2002, Wilders took up the same themes which have dominated Dutch politics since: opposition to the Islamization of Dutch society, a moratorium on immigration, particularly Muslim immigration, and a harsh crackdown on criminality among Moroccan and Turkish young men. Wilder has suggested that the Netherlands leave the European Union and the Euro. He has opposed cuts in social services and social security. In general, Wilders describes his Party as a right-wing Liberal party aiming to preserve the free, secular society of the Netherlands.

Baudet and Wilders hardly differ on any of these policies. But the attraction of Thierry Baudet is more a function of timing and style. Wilders is seen as a crass Trumpian figure who has built a charismatic, largely working-class movement rather than a disciplined party. Baudet is a smoother operator with appeal to the educated elite and ambitions to build a more conventional political organization. Paradoxically, it is this difference in style that has made Baudet more feared by the Dutch political Establishment.

It is Baudet’s style which accounts for his dramatic success and the hostility of the Dutch elites.

In the first instance, Thierry Baudet is the role model for what the Dutch want in a politician. The 37-year-old is single, handsome, quick witted and very charismatic. He has his PhD in law from Holland’s most prestigious university in Leiden. He gave part of his Parliamentary maiden speech in Latin. His writings and speeches are filled with illusions to classical antiquity and Dutch history. The Dutch like to think that their political leaders know policy and poetry. Baudet actually does.

Second, Baudet has connected with the concerns of middle-class Dutch. He is a skeptic of the European Union and the Euro. He argues that the ruling coalition’s “global warming” plans represent an elitist project which hurts ordinary Dutch[ 5 things to know about Dutch far right’s new figurehead, by Eline Schaart, Politico, March 25, 2019]. In recent weeks, he has spoken out against further Covid lock downs and wearing masks. Baudet has even announced he won’t be taking the Covid vaccine, because he trusts his own body to deal with the virus.

What worries the elites most is Baudet’s vision. Geert Wilders is a very effective parliamentary leader, unafraid of political brawling. But in contrast, Baudet speaks grandly about saving Western Civilization. That vision involves dethroning the ruling elites, scaling back the European Union and getting rid of the Euro. It involves ending Muslim immigration. But he has more issues in mind.

Thus in an article in American Affairs, Baudet suggested that most women would be happier staying at home with their children rather than going to work each day [Houellebecq’s Unfinished Critique of Liberal Modernity, Summer 2019]. Baudet’s thinking goes beyond tax rates. It is a vision that Baudet can articulate to both intellectuals and a broader public.

Above all, Baudet’s style has allowed him to appeal to the Dutch Middle classes by looking respectable. This in turn allowed him to attract a serious group of educated and experienced Dutch politicians who saw him and his party as the socially acceptable alternative to Wilders. [ The New Face of the Dutch Far-Right, by Thijs Kleinpaste, Foreign Policy, March 28, 2019]

That is something the globalist Dutch elites fear. But it is also the Achilles heel of the Forum for Democracy.

Geert Wilders and his Party members have had 15 years to get used to being treated as pariahs. They all know that if they are elected for office for the Party for Freedom that they will be shunned by neighbors and attacked in the press.

But a sizable number of Baudet’s people bolted at the first major media-driven assault on the “respectability” of the party.

What now? What does this hold for the elections scheduled for March of 2021?

Interestingly, the Dutch immigration patriot leader Pim Fortuyn faced a similar crisis just three months before the general election of May 2002. Fortuyn had agreed to head the Livable Netherlands party, with immigration as the focus of the campaign. But in early February of 2002, Fortuyn gave an interview to the very same Volkskrant newspaper in which he said he wanted to close Dutch borders to all Muslim immigration and perhaps change the laws on discrimination. The Livable Netherlands party fired him the next day [Fortuyn komt met eigen lijst, opzet vermoed achter ontslag, Volkskrant, February 12, 2002].

Fortuyn reacted by forming the “List Pim Fortuyn”. And even after Fortuyn’s assassination—by an immigration enthusiast, it emerged after a prolonged period of MSM repression—the LPF won 26 seats, becoming the second largest party in Parliament. The “Livable Netherlands” party won just two seats.

Baudet is in a similar position. He has three months to reorganize for the March 2021 parliamentary elections. He knows which who was loyal and who was not. That will allow him to put together a list of candidates who won’t turn and run at the first negative article in Volkskrant.

He has the solid support of the base of the party. Above all, he has the vision which has brought him this far. The major issues of immigration, Islamization, the European Union and the Euro are not going away.

In this regard, Thierry Baudet—and Geert Wilders too—are not going away either.

Peter Martin [Email him] lived in Western Europe, speaks German, French and Dutch and follows European affairs. After working a couple of decades in the Swamp, he has moved to the American West.