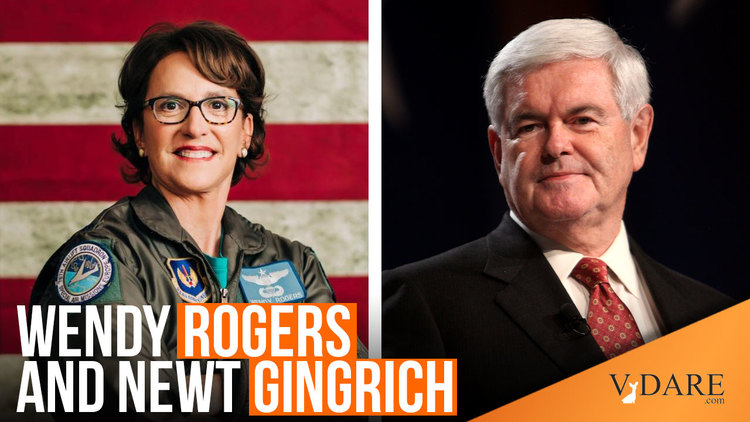 Earlier, by James Kirkpatrick: Leftists Claim “Great Replacement” Is A “Conspiracy Theory” …Unless They’re Bragging About It

The “marketplace of ideas” of the classical liberal imagination has been replaced by something close to an ideological ration system, and nowhere is this truer than on issues of race and immigration. Approved persons are allowed to have opinions. Others are not, despite citing the same set of facts.  This has long been true for the War On Christmas and now it’s true for the Great Replacement. The question: can what passes for the American Right build an effective response now that at least some of their leaders are beginning to see what’s happening?

Recently, Arizona state senator Wendy Rogers made the obvious point that mass immigration is about replacing the existing American population:

We are being replaced and invaded. https://t.co/JEJaQjVC5E

Of course, this led to Regime Media hysteria and demands for apologies. There was no pretense at debate. The argument from corporate journalism was simply that you can’t Notice this or else you want to kill people.

The use of “gross” to describe an opinion (one is reminded of Ben Affleck reacting to Sam Harris and Bill Maher criticizing militant Islam) shows that the “disgust” reaction may not actually be stronger among conservatives, as some research has claimed [Conservatives are more easily disgusted than liberals, by Yoel Inbar, David Pizarro, and Paul Bloom, Cognition & Emotion, Volume 23, 2009]. Liberals simply associate it with different things. The case against the state senator was not that she was factually wrong. It was simply that the point sounded something like what other people said.

Yet the state senator hadn’t said anything about Jews, let alone violence.

The Anti-Defamation League made sure to get an attack out on Senator Rogers [Two Years After Deadly El Paso Attack, Anti-Latino and Anti-Immigrant Hate and Extremism Persist, August 2, 2021]. Of course, as Tucker Carlson pointed out back in April, the ADL itself argues that it is “unrealistic and unacceptable” to expect Israel to “voluntarily subvert its own sovereign existence and nationalist identity and become a vulnerable minority within what was once its own territory” [Tucker Carlson: The truth about demographic change and why Democrats want it, Fox News, April 12, 2021]. The ADL is just mind-bogglingly hypocritical when it comes to its host country: the USA.

And if merely talking about demographic issues leads to “violence,” then the moral guilt of every crime that has been arguably incited against whites should be on the conscience of the journalists, NGOs, and politicians who have been stoking anti-white hate.

In fact, of course, the “Great Replacement” concept itself has been repeatedly invoked by Leftists when cheering on the process. The latest example: Senator Dick Durbin (D.-IL) who did it late last month.

“The demographics of America are not on the side of the Republican Party. The new voters in this country are moving away from them, away from Donald Trump, away from their party creed that they preach.”

Sen. Dick Durbin: "The demographics of America are not on the side of the Republican Party. The new voters in this country are moving away from them, away from Donald Trump, away from their party creed that they preach." pic.twitter.com/IiPsBKV2of

The facts of the Great Replacement are not in dispute, it’s just a question of whether you think that the demographic (and thus political) transformation is a good thing or a bad thing. Michael Anton has termed this the “Celebration Parallax,” the Left’s denial that something is happening until it is too late, at which point it is defended as something that was morally necessary [Michael Anton Convinced Me To Vote For Trump Like America Depends On It, by Joe Allen, The Federalist, October 30, 2020].

The same sort of political sleight of hand occurred with the 1965 Immigration Act, arguably the most important piece of legislation ever passed in American society. It was pushed through amid promises that it wasn’t a big deal.

Specifically, Senator Durbin was talking about demographics while speaking against rules that could secure clean elections, arguing that “new voters” would doom the Republican party [Video: Dick Durbin Endorses Great Replacement, Says ‘Demographics’ Are ‘Not On The Side Of The Republican Party,’ by Gabriel Keane, National File, July 19, 2021]. He wants to make sure those voting requirements are as lenient as possible so those “new voters” can be shoved into the polling booths (or at least mail in the ballot.)

The word choice of “new voters” is significant. Senator Durbin is fully aware that demographic transformation is a policy choice driven by political considerations, as VDARE.com Editor Peter Brimelow showed decades ago. It’s the Republican leadership who remain clueless about its consequences.

However, that may not be true of the Republican base.

Consider Newt Gingrich. Gingrich is responsible for many of our current problems, including the survival of Affirmative Action and mass immigration, both ignored in his celebrated  “Contract With America.” At worst, Newt worked with the Left to protect multiculturalism. At best, he failed to act when America could still have been saved without drastic change.

Nonetheless, Newt Gingrich today needs to retain a certain amount of credibility with the Republican base, if only so he’ll remain relevant and worth booking on television. Thus, even if he’s being entirely cynical and just wants to keep the Fox News crowd on board, it’s significant that he recently said—

[Gingrich on Border: Anti-American Left’s Ideal Model Is To “Get Rid Of The Rest Of Us," by Ian Schwartz, RealClearPolitics, August 4, 2021]

As the Left reverts to magical thinking, we can expect more of this kind of reaction. It’s as if they think “The Great Replacement” is an occult phrase that might unleash dark powers.

And perhaps there’s something to that. If Americans Notice what is being done to them through immigration policy, they may want their leaders to do something about it.

Remember, the Left is pushing Critical Race Theory. It is explicitly trying to dispossess what Newt calls “traditional, classic Americans” (whom we would simply call the Historic American Nation). Indeed, the Left is essentially a coalition of people who hate whites as such, not just the American nation-state. It’s hard to determine what modern Progressivism is other than just hating whites:

The Great Replacement isn’t a conspiracy theory, but a fact. It’s recognized as such by friends and foes alike. The only thing that matters is whether you think it is good or not. And if you have misgivings about being reduced into a hated minority in the only country we have, the Left’s only answer is repression.

After all, hurting you is their real reason for supporting mass immigration in the first place.

James Kirkpatrick [Email him |Tweet him @VDAREJamesK] is a Beltway veteran and a refugee from Conservatism Inc. His latest book is Conservatism Inc.: The Battle for the American Right. Read VDARE.com Editor Peter Brimelow's Preface here.