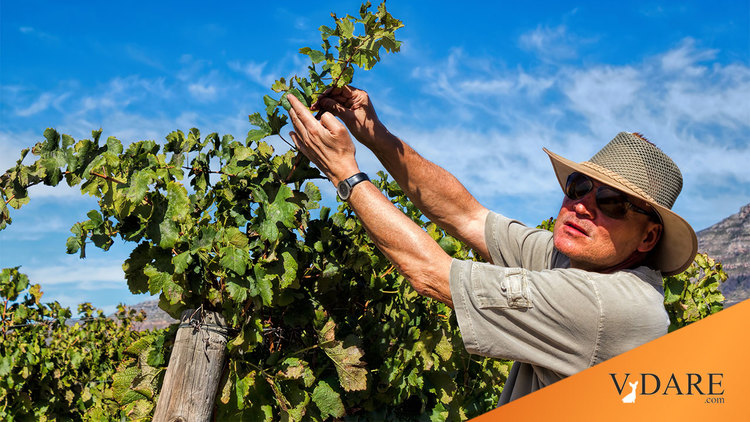 The federal government spends massive sums of money, lets the industry flood the country with mostly nonwhite foreigners both illegally and legally, gives those foreigners and their employers a payroll tax break and lets them undercut workers. On its face, that sounds like terrible policy, but that’s how the United States approaches the farming industry these days.

It’s a patchwork of terrible policies. The federal government spent more than $40 billion on farming subsidies last year as national debt continues to rise  [Farmers see record $40B in aid, but many are uneasy accepting help, by Adam Belz, Star Tribune, October, 31, 2020]. Did they do this to protect an industry with jobs filled by American workers? No, this isn’t like subsidizing, say, the Pennsylvania steel industry or putting a provision in a trade agreement that stipulates that automakers must make a certain percentage of their car in the United States for it to sell here. It’s an inefficient system that not only drives up costs for American consumers and takes jobs away from members of the Historic American Nation, but it also changes the country’s demographics for the worse.

Allow me to explain…

Over the last 15 or so years, the United States has been issuing far more H-2A visas than ever before. It's a visa program that brings foreign nationals into the country to take agricultural jobs. It's supposedly temporary, but the program can last for up to three years, according to U.S. Citizenship and Immigration Services. The left-leaning Economic Policy Institute notes that from 2005 to 2019, the number of visas issued per year skyrocketed from 31,892 up to 204,801 [Coronavirus and farmworkers, by Daniel Costa, Economic Policy Institute, March, 24, 2020]. That’s a lot of people.

As we know, visa overstays are the top reason for illegal immigration in this country, which means this program brings in future illegal immigrants—and future citizens, for all we know, because Democratic politicians want the voters and many Republican politicians are shills for their donors who benefit from the cheap labor. Not to mention, temporary workers can reproduce in this country and, thanks to the kritarchy, birthright citizenship for their children is still somehow a thing.

This H-2A program brings people into the country primarily from Mexico. Mexicans receive more than 90 percent of those visas while Jamaicans and Guatemalans comprise about five percent combined [The H-2A Program in 2020, by Philip Martin, Wilson Center, May, 19, 2020]. Do those countries look like the Historic American Nation? Not at all.

And from an American worker’s perspective, there are economic serious issues here. The IRS notes that there is a payroll tax exemption for the H-2A visa program [Foreign Agricultural Workers on H-2A Visas, IRS.gov]. Not only does that mean these foreign workers contribute less to the pot than American taxpayers doing the same work, but it makes it even cheaper to hire foreigners over Americans.

We already know that increasing the labor pool depresses workers’ wages and that foreigners are willing to work for less than Americans, but this makes the situation worse. It lets employers legally save 7.79 percent by not hiring Americans [Payroll Tax Benefits for Employers, SeasonalStaff.org].

And this is an industry subsidized by the federal government. We’re all paying for this.

The H-2A program is something that even Leftist labor unions don’t like. Notably, the Laborers International Union of North America (LiUNA) opposes companies using the H-2A visa for construction work [Immigration, liuna.org]. Employers will use H-2A workers to build farm infrastructure because they’re far cheaper than the local building trade union workers. They can pay Pedro $13 an hour to build the kinds of buildings that pigs live in rather than the $25 or $30 an experienced American may command. So the H-2A program is busting down wages not just in agriculture, but also in construction [The Visa Loophole That Big Ag Construction Firms Love To Exploit, by Stephen Franklin, In These Times, April, 30, 2018].

You’ve probably heard some out-of-touch liberal you know say something to the effect of “who will pick the berries?” if it weren’t for immigrants—or illegal aliens. Even the U.S. Department of Agriculture admits that illegal aliens comprise the largest bloc of crop farmworkers. From 2014 to 2016, they held 48 percent of those jobs. Meanwhile, only 27 percent of hired crop farmworkers were American-born. Meanwhile, 4 percent were foreign-born American citizens, and 21 percent had some form of legal authorization to be in the country [Farm Labor, usda.gov].

If the majority of workers in an industry aren’t American and shouldn’t be here, that’s a good sign that it doesn’t deserve subsidies.

These illegal aliens are people who will gladly work less than minimum wage, screwing over the native-born American workers by making them less appealing to hire and making their labor less valuable.

Not to mention, they bring their customs and values to our country and we don’t want our country to be more like Mexico or Guatemala, nor do we want their people to live on welfare here and to reduce social cohesion here.

Thankfully, there are a few solutions to this problem—and they would all likely improve our current immigration situation.

We can get cheaper food from abroad without sacrificing American jobs. Free trade makes sugar cheaper in other countries than it is in the United States, so why should we pay more for a product produced by illegals?

If our country imported more food from some of these Latin American countries and maybe even had provisions in trade deals that boosted those farmers’ wages, they may be more likely to stay put in their own countries. If the living situation is better, they might not be so fast to leave. Not to mention without subsidies, fewer of those Big Ag swamp monsters would exist. Then the farm labor of American farmers would increase.

They are the victims of discrimination and violence in their home country and would be a good fit for the United States. The language barrier is minimal, they improve the ethnic balance of the country, and modern farming   is a skill they have

Meanwhile, South Africans tend to be conservative and understand the Identity issue better than the average police-supporting, Israel-loving Boomercon in the United States, who thinks our biggest problem is “socialism”.

We should want conservative South Africans voting in our elections—and filling jobs if the industry really does have an intractable labor shortage.

(In fact, amazingly, the COVID travel ban revealed that a trickle of white South African guest workers have been coming to the U.S. farms, where they operate the sophisticated machinery “sometimes worth $400,000 to $500,000” that can substitute for unskilled labor [South African farm workers coming to US jarred by COVID-19, By  Mikkel Pates, AgWeek, April 6, 2020].)

Even more amazingly, the Biden Regime exempted them from the travel ban “[f]ollowing pressure from farm groups and farmers themselves” [South African H-2A Guest Workers Given Exemption from Travel Ban , DTN February 1, 2021]. Getting them to settle in the U.S. permanently should be a simple matter.

By revamping the ways Americans receive their food, we have a real opportunity to improve wages for American workers in the farming and construction industries while improving the purchasing power of the average American with cheaper, imported foods.

And if these ideas don’t convince someone that we need to change the industry, just say it’s to prevent future pandemics. For example, foreign workers cause romaine lettuce outbreaks all of the time because they don’t wash their hands. How can we expect them to slow the next spread in 15 days?