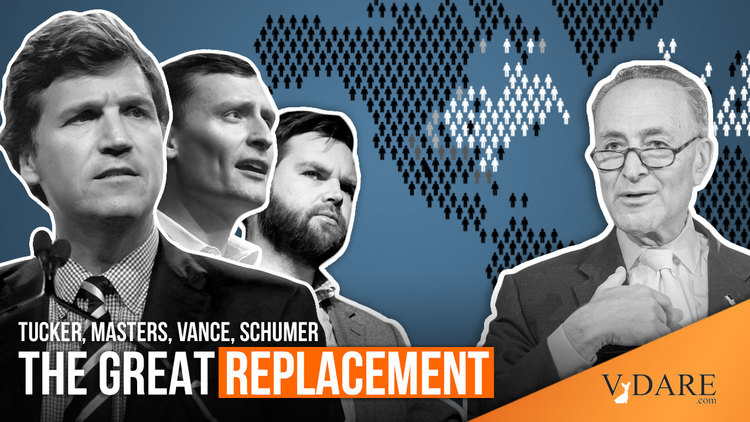 The Great Replacement: Cat Out Of Bag, Democrats Frantic

No one was surprised that Leftists from President Biden down to the governor of New York demanded the eradication of “Hate Speech” after the terrible mass shooting in Buffalo, New York. The rhetoric urging censorship is bad enough. But mandating policies that actually attack free speech is even worse [‘White supremacy is a poison,’ Biden says as he calls for ending Hate Speech and curbing guns, by Robert J. McCarthy, Buffalo News, May 17, 2022]. Yet the shooting itself, of course, is not driving the crackdown push. Rather, Leftists fear that mainstream Republican and conservative lawmakers—and, more threateningly, voters—are Noticing the Great Replacement. Demographic change is essential to the Democrats’ political mission, but they don’t want the Historic American Nation to know they are pushing the change. Thus, Leftists call the Great Replacement a “white nationalist conspiracy theory” to silence discussion…unless, of course, those discussing the replacement think it’s a good thing. But that tactic is failing. Millions of Americans and their leaders are openly discussing the obvious.

Anyone vaguely familiar with the America’s demographics, including Leftists, know that the Great Replacement is far from a conspiracy theory. It simply posits that the Ruling Class of the West is electing a new people through mass immigration, a fact VDARE.com has long pointed out. In 50 or so years, America has gone from 87 percent to 57 percent white. Here’s why: insane immigration policies, anti-white immigration legislation—most notably the Hart-Celler immigration bill in 1965—the 1986 Amnesty, and today, simply opening the borders to millions of Third World illegal aliens. Democrats themselves admit the truth. They’re trying to brown the country.

Leftists would have you believe the change is akin to changing seasons; no one is really responsible for the Camp-of-the-Saints invasion this country is suffering. “Migrants” looking for a better life just showed up. To suggest otherwise is a dangerous conspiracy theory.

So now the Democrats and their Leftist Mainstream Media Information Ministry are linking the shooting in Buffalo to that “conspiracy theory” in general, and to Fox News’s Tucker Carlson in particular. The host of the No. 1 cable news show talks about it regularly and influences Republican politicians. Carlson is arguably the Democrat-MSM combine’s principal target. Just a few weeks prior to the shooting, the  New York Times published a mammoth hit piece on the Fox News star. It lamented his discussing demographic change and anti-white racism, allegedly a sign of unspoken white nationalism. The Gray Lady unleashed another attack against Carlson right after the shooting that strongly implied his rhetoric encouraged the shooter [A Fringe Conspiracy Theory, Fostered Online, Is Refashioned by the G.O.P., by Nicholas Confessore and Karen Yourish, New York Times, May 15, 2022]. Carlson’s name trended on Twitter after the shooting, with Leftists explicitly blaming him for the attack and demanding the Feds yank him off the air. The Anti-Defamation League demanded that Fox fire Carlson. NBC News contacted Fox News sponsors to get them to condemn Tucker’s rhetoric. Two of the sponsors insisted they don’t advertise on Carlson’s show and the others didn’t respond [Fox News’ Tucker Carlson under fresh scrutiny after Buffalo mass shooting, by Daniel Arkin, NBC News, May 16, 2022].

Breaking: @ADL calls for Tucker Carlson's firing in a letter to Fox News CEO Suzanne Scott. @JGreenblattADL says "it was shocking to hear this kind of open-ended endorsement of white supremacist ideology from an anchor and commentator on your network." https://t.co/jtovqlmxmG

Senate Majority Leader Chuck Schumer was particularly exercised about Carlson and condemned him and Fox News in a Senate floor speech. He also sent a formal letter to the cable news giant. “I implore you to immediately cease all dissemination of false white nationalist, far-right conspiracy theories on your network,” Schumer wrote. When Tucker invited Schumer to defend his position on his show, the Democrat declined. He instead insisted: “Tucker Carlson needs to stop promoting the racist, dangerous ‘Replacement Theory’” [Chuck Schumer Sends Letter To Rupert Murdoch Calling For End To Amplification Of “Great Replacement Theory,” by Ted Johnson, Deadline, May 17, 2022].

.@TuckerCarlson invited me on his show tonight to debate the letter I sent to @FoxNews.

The bad news for Democrats is this: It’s too late. Republicans now openly discuss the threat of demographic replacement. It’s not a fringe idea anymore, but instead part of mainstream discussion in GOP circles. Just look at this list of Republicans whom the media attack for promoting the “Great Replacement”:

.@TuckerCarlson is CORRECT about Replacement Theory as he explains what is happening to America.

The ADL is a racist organization. https://t.co/32Vu60HrJK

While the press and Democrats demand that Republicans condemn this rhetoric and punish those who mention it, the mainstream Right is, surprisingly, showing some backbone. Several conservatives defend Carlson and others and say the Great Replacement is an obvious truth. That includes National Review (albeit tactfully hidden behind a paywall) [Replacement Theory and Replacement Facts, by Michael Brendan Dougherty, May 18, 2022]. Ron DeSantis’ popular spokeswoman Christina Pushaw tweeted her support for conservatives who discuss it. And many of the major figures accused of spreading this “dangerous” theory—Carlson, Vance, Masters, and Patrick—stayed on message through the last week [After Buffalo massacre, Republicans double down on ‘great replacement,’ by Paul Waldman, Washington Post, May 20, 2022].

Not a “theory”, just reality. I started grad school at Johns Hopkins in Italy back in 2015. We learned that most European countries’ birth rates are too low to sustain the population, so EU governments favored mass immigration from the Middle East & Africa to grow the workforce. https://t.co/hENDiykLGf

Thus, Democrats now know they can’t just wag censorious fingers and hope no one notices their political scheme. That’s why they want to censor anyone who mentions it.

New York Gov. Kathy Hochul is leading the charge. She called upon Big Tech to censor even more than it does now. Hochul absurdly believes that the Constitution does not protect Hate Speech. (It does.) “I will protect the right to free speech, but there is a limit, there is a limit to what you can do in hate crimes. Hate Speech is not protected,” she said [Hochul says social media must crack down after Buffalo killings, Bloomberg, May 15, 2022]. She also proposed an Orwellian state police agency to track “Hate Speech” on the internet. Whether this agency will actually have the power to censor or even arrest WrongThinkers remains to be seen [Gov. Hochul Orders New York State Police to Create New Unit to Fight Hate Speech Online, by Emma Colton, Fox News, May 18, 2022].

Good thing is, no matter what the Democrats do, the cat’s out of the bag. The Great Replacement is no longer an idea consigned to the fringes of the right. It’s part of the new Republican consensus on border security and immigration. As well it should be.

Maybe the Historic American Nation stands a chance, after all.