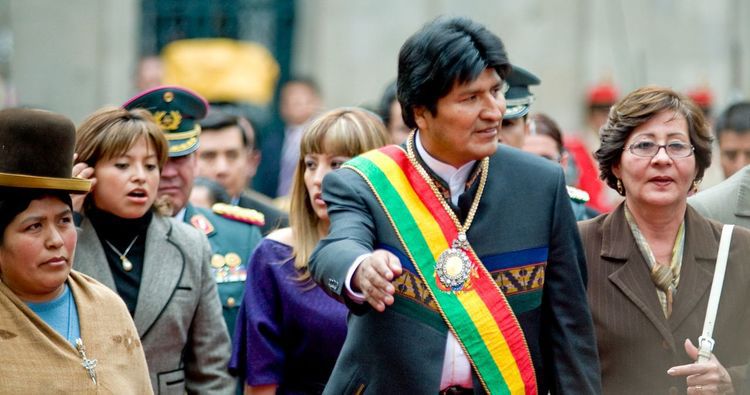 The Wind from the South— Anti-White Populism

For several years, we have been pointing out that, despite rosy predictions that Latin American immigrants are "natural Republicans," a mighty storm is brewing in Latin America—and that it will eventually reach the U.S.

Recently, even the Mainstream Media [MSM] has started to notice that something is going on down south.

"SANTA CRUZ, Bolivia — A growing indigenous movement has helped topple successive governments in Bolivia and Ecuador and, angered by the destruction of Andean coca crops, now threatens the stability of other countries where Indians are in the majority. Drawing support from European leftists and Venezuelan President Hugo Chavez, the long-marginalized Indians are tasting political influence for the first time since the Spanish conquest and beginning to wrest power from South America's white elites. The leader of Bolivia's Movement to Socialism party (MAS), Evo Morales, talks about 'uniting Latin America's 135 Indian nations to expel the white invasion, which began with the landing of Columbus in 1492.'"

This marks a significant change. Latin American politics was long dominated by imported ideologies, such as Marxism in the 1960s and 1970s and laissez-faire in the 1990s. They were largely irrelevant because none of them dealt directly with Latin America's essential political problem: the enduring racial conflict originating in the Conquest of a half millennium ago.

And, despite almost 500 years of intermarriage, the economic elite remains strikingly whiter-looking, compared to the more Indian and/or black-looking people at the bottom. As Vicente Fox's former Foreign Secretary Jorge Castaneda admitted in 1995, Mexico's ruling elite has been getting whiter. Many powerful men in Mexico and throughout Latin America had recent ancestors who clawed their way up out of the darker masses. Over the generations, their descendents get whiter-looking as the rich men marry the fair-skinned and fair-haired women—who are, interestingly, still considered the last word in beauty in Latin America.

And it's not just skin color. The rich literally look down upon the poor. President Fox, for example, whose paternal grandfather was an Irish-American, is almost six and a half feet tall. He towers over George W. Bush. That makes Fox close to a foot taller than the average Mexican man.

In the past, these fundamental ethnic conflicts were typically furnished with an ideological façade. Remember the Shining Path rebels in Peru? They were always labeled "Maoist" in the American press, as if they were fighting and dying because they believed in the backyard steel furnaces.

In reality, they were highland Indians rebelling against their economic domination by whites. But they featured a white Marxist intellectual as their leader, who put an ideological gloss on their struggle.

In 1989-1991, we saw the "End of History," as Francis Fukuyama famously put it. Democratic capitalism was supposed to have definitively triumphed.

Somebody forgot to send History the memo. Still, Fukuyama wasn't completely wrong: what had changed was that people felt less need to dress up their struggles for power in fine-sounding ideologies. History had reverted to what it always had been before the French Revolution made ideology au courant. As Lenin had said, the eternal question is: "Who? Whom?"

In some countries like Bolivia, the darker people are all Indians, justifying the term "indigenous movement."

But in Brazil, which elected the leftist populist Lula, non-indigenous blacks vastly outnumber Indians. Americans expect to find a color line, but there's only a color continuum. That makes it confusing even to name the opponents.

In most of these countries, there is a vast middle ground of mestizos, mulattos, or tri-racial "pardos." But the American press isn't sure if it's even allowed to use those terms.

The simplest description of the uprisings is that they are "anti-white." But that's another term that the American media are ill at ease with.

And even that isn't an exhaustive description, since leftists have been winning in Argentina and Uruguay, two countries that are more or less all white.

The trend toward racial conflict and leftist populism is particularly acute in northern South America, but populists have been winning elections throughout much of Latin America.

This has caused trouble for President Bush, whose family has ties to Latin America's corrupt white elites going back 45 years. He has been giving fervent speeches about the all-around wonderfulness of democracy in the Middle East. But his administration supported the military coup against Chavez in 2002, only to be embarrassed when it collapsed in the face of massive street protests.

Mexico has actually been a laggard in this anti-white populist trend. There, the ruling class has long paid lip service to the darker masses. Since 1928, the Mexican government has officially celebrated every October 12 as the "Day of The Race." According to the national ideology, all Mexicans belong to "La Raza," that perfect combination of white and Indian traits that produces a superior "cosmic race." (The African contribution to Mexico's gene pool has been dropped from the history books, although it is probably around five percent.)

These fine words haven't made life terribly cosmic for Mexico's poor. But they may have helped Mexico avoid the brutal race war that wracked neighboring Guatemala in recent decades.

Yet the wind from the south is blowing in Mexico, too. Mexico's right-of-center PAN party controls the all-important Presidency for another 18 months. PAN was trounced in the 2003 midterm elections, and its outlook is poor for 2006's Presidential race.

The popular mayor of Mexico City, Andrés Manuel López Obrador, is likely to run for President on the leftist PRD ticket as the enemy of the white elites. His foes, such as President Fox, had him briefly disqualified on a technicality, but they broke down under popular pressure and rescinded the ruling.

Personally, I doubt that leftist ethnic populism will do the poor of Latin America much good. But, then, the Cold War is over and the Evil Empire is gone. They have a right to make their own mistakes.

For the U.S., domestically, the ongoing racial radicalization of the darker-skinned people of Latin America portends difficulties. The immigrant stream from Latin America is increasingly less white, as regions farther south in Mexico are tapped. We are even seeing hundreds of thousands of pure Indians who speak no Spanish. Next year's Mexican election will be closely followed on Spanish-language television by tens of millions of immigrants in the U.S. And then this vast anti-white movement might begin to surface here.

This anti-white movement in Latin America will likely make the less white Hispanics more resentful and hostile toward non-Hispanic whites in America.

This could set off massive social change.

Many affluent white supporters of illegal immigration in the U.S. see Hispanics as genetically programmed to be their docile, cheerfully subservient maids and gardeners.

What is often forgotten is that their grandparents viewed blacks the same way. That's why corporations named famous food brands "Uncle Ben" and "Aunt Jemima"—the connotation was that by buying these products, you were virtually partaking of the rich man's luxury of having your own smiling, nodding black cook.

During the Black Pride movement of the 1960s, however, blacks came to resent servant jobs.

And how much can you blame them? There's something that's just not very American about the master-servant relationship.

The downside, of course, was that when blacks turned against their old jobs, many ended up resorting to crime to make money.

Which is why wealthy Americans discovered illegal immigrant Hispanic service workers. They came to assume that it was the natural order of things for whites to command Latinos.

I suspect that the anti-white movements in Latin America will, sooner or later, set off a revulsion among Hispanics in this country against servile jobs roughly similar to the Black Pride reaction of the 1960s.

I wouldn't be terribly surprised if, in a generation, wealthy Americans are smugly assuming that their new Indonesian immigrant servants are naturally deferential—unlike those sullen, crime-prone Latinos they had to let go.

And perhaps in two generations, the rich will tell each other that their new Indian Untouchable immigrant servants are born knowing their place, unlike those uppity Indonesians they had to fire.

But what if I'm not?

Shouldn't we at least be talking about these possibilities?

As always with American's post 1965 Immigration Disaster: Why are we taking this risk?