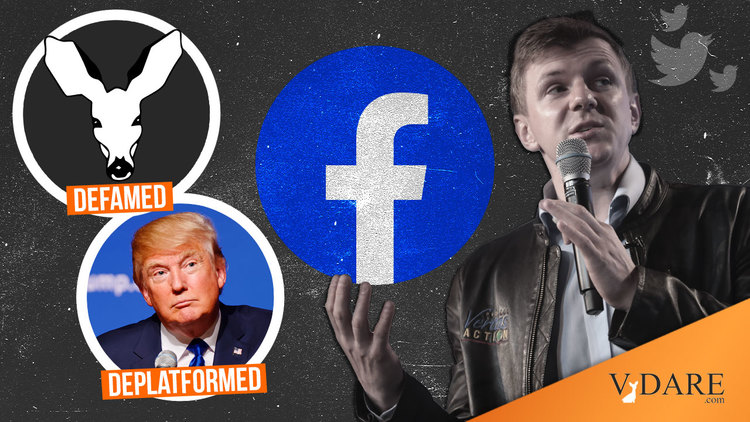 “They Want Us In Gulags” (That Includes Trump). Why VDARE.com Is Suing Facebook For Defamation

Facebook’s unelected multinational, multicultural, uniLeftist panel has just upheld its ban on Donald J. Trump, meaning that the 45th President of the U.S. is still unable to communicate with his 74,222,958 American voters [Facebook Ban On Donald Trump Will Hold, Social Media's Oversight Board Rules, by Shannon Bond, NPR, May 5, 2021].(He has started a blog at DonaldJTrump.com/desk, something we suggested here.)

This disgraceful situation, profoundly insulting to the U.S. as a sovereign democracy, has particular resonance for us here at VDARE.com. Just a year ago, our own Facebook page was deleted, completely without warning, on the false claim that we were engaged in what Facebook called "Coordinated Inauthentic Behavior" [PDF] a.k.a. we were running a “bot farm”—multiple automated sites designed to enhance traffic. This was a lie. We have now sued Facebook for defamation (HERE—we will be expanding this complaint later). I am honored to say that our suit exactly parallels the heroic Project Veritas’ recent defamation suit against Twitter, just as our federal defamation suit against the New York Times parallels Project Veritas’ (strikingly successful) suit in New York State court. Hopefully, it’s a trend.

I will now reveal why we delayed filing against Facebook for so long: for an all too human reason—my wife, the former Lydia Sullivan, now President of the VDARE Foundation and Publisher of VDARE.com, who first introduced me to Facebook when she was a student at Loyola University in Chicago, had used it, as an entire generation had been encouraged to do, as a personal record. Her school pictures, her graduation pictures, her wedding pictures, her honeymoon pictures, her baby pictures, baby vignettes and conversations with personal friends dating back to grade school, were all trustingly stored there.

Yet it was eliminated. Every photo, status update and interaction is now being held hostage—because of her association with me.

Similarly, the personal Facebook pages of a number of other individuals associated with VDARE.com, including my own, were eliminated. My own Facebook posts were mostly professional, but I hadn’t posted anything for a long time, precisely because I had concluded it was so censored that it had become useless. However, even my past posts, previously judged unexceptionable, have been destroyed. 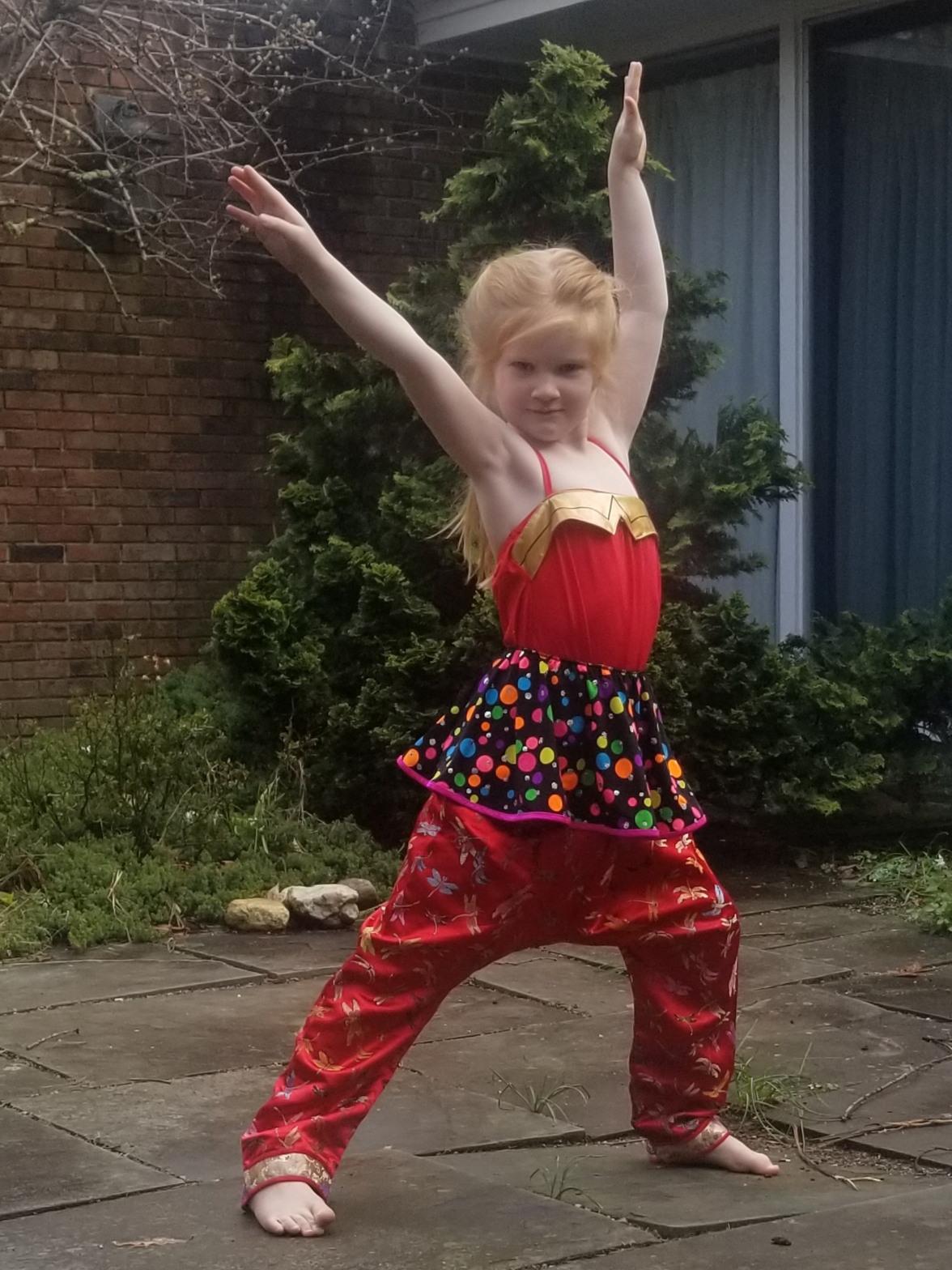 The caption was this quote from Bo: "Old people are the fanciest, because their hair gets all sparkly and they have ruffles on their skin!"

(Reassuring for me, actually.)

Is this post so terrible? Does it need to be banned?

Lydia wrote a personal appeal to an appropriate Facebook contact point on May 4. She wasn’t asking to be reinstated on Facebook. She just wanted her data back. She received no reply.

Facebook’s refusal to respond to a young mother’s anguished appeal strikes me as irrefutable proof that these people want us in Gulags.

Improbable as it may seem, VDARE.com does have friends who have influence at the highest levels at Facebook. They tried to help us. They failed.

Our lawyer engaged in a protracted correspondence with Facebook, aiming not to reinstate our account—we are all too aware that we don’t live in a free country—but just to retrieve Lydia’s data.

But then, in mid-November 2020, Facebook abruptly reneged on its agreement to provide Lydia’s data.

With typical arrogance, Facebook provided no reason for its reneging. But, perhaps significantly, this was after the 2020 Presidential Election result was called by the Regime Media.

Note to Facebook shareholders: we didn’t want to waste your money on this. But your management’s intransigence provides us with no incentive but to proceed with litigation.

Although Facebook claims it blocks VDARE.com for operating a bot farm, the fact that this is a lie is obvious because Facebook now also prevents readers who, subsequently and quite independently, have found articles on our website that they want to share with their Facebook friends, from doing so.

When they try, they now see this message: 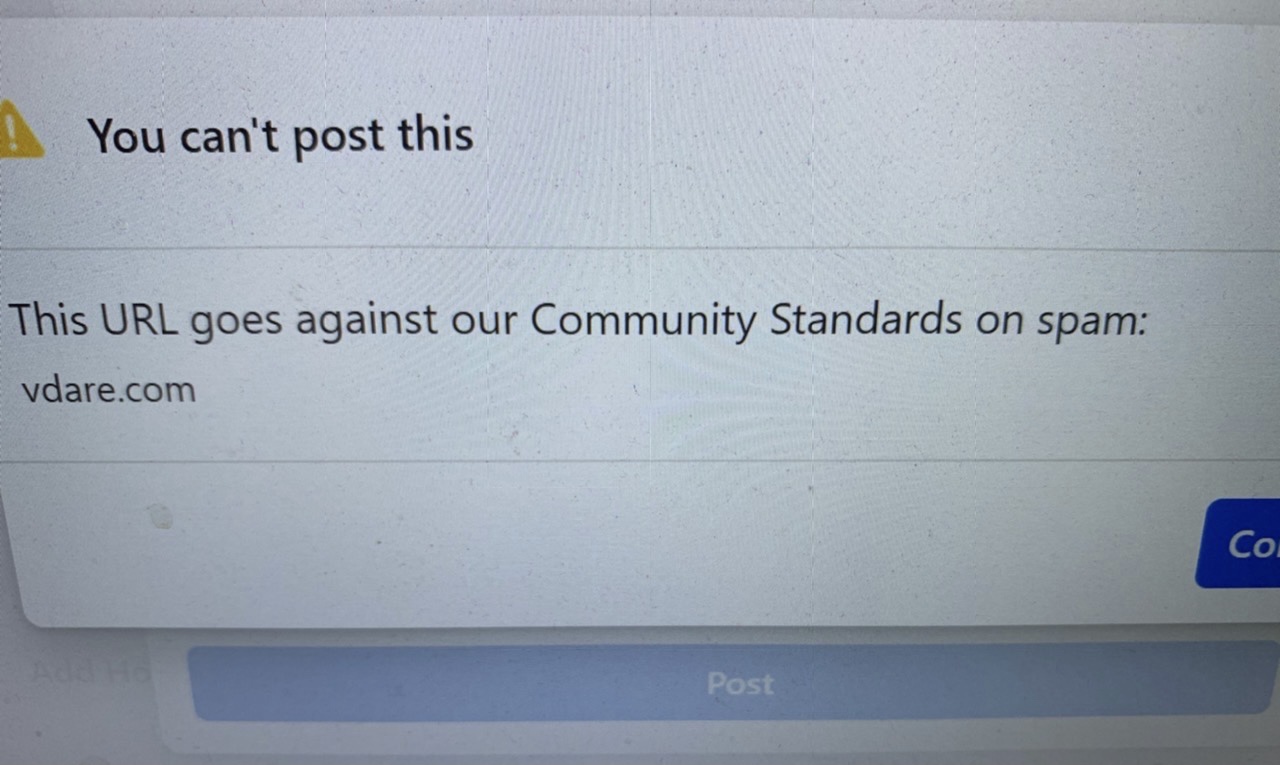 Of course, this is clearly further defamation of VDARE.com and clear evidence of Facebook’s continuing malice.

These people just think they’re beyond the reach of law.

My theory: the backstory was provided by Molly Ball’s inadvertently epochal TIME magazine article The Secret History of the Shadow Campaign That Saved the 2020 Election (February 4, 2021. Emphases added).

With astonishing lack of self-awareness, Ball chronicled the efforts of what she called a “a well-funded cabal of powerful people” engaged in “fortifying” the election, an effort in which she was clearly intimately involved, journalistic objectivity be damned.

Laura Quinn, a veteran progressive operative…piloted a nameless, secret project, which she has never before publicly discussed, that tracked disinformation online and tried to figure out how to combat it. One component was tracking dangerous lies that might otherwise spread unnoticed. Researchers then provided information to campaigners or the media to track down the sources and expose them.

This of course means denouncing Hate Facts that Leftists want suppressed, and doxing people who dare mention them.

The most important takeaway from Quinn’s research, however, was that engaging with toxic content only made it worse. “When you get attacked, the instinct is to push back, call it out, say, ‘This isn’t true,'” Quinn says. “But the more engagement something gets, the more the platforms boost it. The algorithm reads that as, ‘Oh, this is popular; people want more of it.'”

This of course means that Leftist positions cannot stand up to rational debate and that ordinary people are interested to know this. Clearly, this cannot be permitted.

The solution, she concluded, was to pressure platforms to enforce their rules, both by removing content or accounts that spread disinformation and by more aggressively policing it in the first place. “The platforms have policies against certain types of malign behavior, but they haven’t been enforcing them,” she says.

In other words, Quinn wants censorship. And she succeeded:

In November 2019, Mark Zuckerberg invited nine civil rights leaders to dinner at his home, where they warned him about the danger of the election-related falsehoods that were already spreading unchecked. “It took pushing, urging, conversations, brainstorming, all of that to get to a place where we ended up with more rigorous rules and enforcement,” says Vanita Gupta, president and CEO of the Leadership Conference on Civil and Human Rights, who attended the dinner and met with Twitter CEO Jack Dorsey and others. (Gupta has been nominated for Associate Attorney General by President Biden.)

Subsequently, Gupta, the child of Indian immigrants and a professional anti-white agitator, has indeed been confirmed as the third-ranking official in the U.S. Department of Justice with the help of Alaska RINO Lisa Murkowski [Biden's associate attorney general nominee Vanita Gupta confirmed after GOP senator breaks ranks, by Jeremy Herb, CNN, April 21, 2021].

This is what VDARE.com calls a Minority Occupation Government—inevitable given the polarization of the parties.

And shows that Mark Zuckerberg, at least on the evidence of his November 2019 dinner, was motivated by a political agenda—suppressing the Trump a.k.a. white American vote.

There are increasing calls to counter this rising totalitarianism by stripping the Tech Oligarchs of their various legal privileges. But it is important to note that our suit against Facebook does not address these issues. Instead, we are suing for defamation—Facebook lied about us, and did it as part of a deliberate campaign to damage us, and of course to deprive readers and voters of our point of view.

This means we are bypassing the Tech Oligarchs’ legal privileges completely. Defamation law is tricky, but there is reason to think we can prevail.

So this is why I have to conclude by asking our loyal and much-loved donors to help us in VDARE Foundation vs. Facebook. Throughout the bitter years in which VDARE.com’s honest efforts to build a self-financing business, for example as an Amazon Associate or as a Google AdSense partner, were abruptly and arbitrarily cut off by Politically Correct corporate bureaucrats, we have been comforted and sustained by our donors’ instant and angry awareness of what was being perpetrated and their willingness to rally around.

Now I must ask you to help us in striking back against the heart of Tech Totalitarianism.

Taking on Facebook will be horribly expensive. But we honestly feel we have no choice.

And, while Mark Zuckerberg can well afford litigation, my experience in the MSM was that libel actions have an impact regardless of the outcome.

But it is a check on libel that can only be activated if victims litigate.

Please give generously. Not just to defend freedom for all Americans, but to help ensure that the cause of immigration patriotism is not driven entirely out of public debate.

I and my family will be most grateful—and so, I sincerely believe, will be those who the Founders referred to in the Preamble to The Constitution, as “ourselves and our posterity.”

Plus, who knows, maybe President Trump will get a kick out of it too.