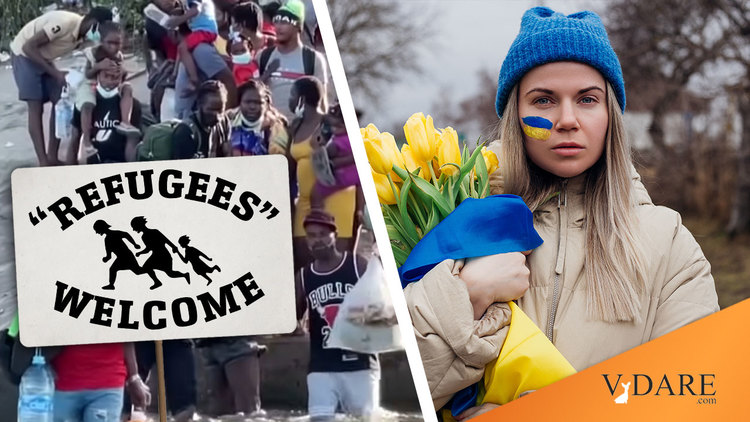 The West faces a rare situation: millions of white refugees are requesting asylum. Almost 3 million Ukrainians have left their war-ravaged country and many more are expected to follow. Western countries have opened their borders, of course [How many refugees have fled Ukraine and where are they going?, BBC, March 14, 2022]. But the anti-white American Ruling Class is visibly reluctant—unless it can use Ukrainian refugees to leverage more immigration from the Third World to hasten the Great Replacement. They’ve done it before.

A little history. In 1986, the late but not lamented Senator Ted Kennedy and white ethnic politicians concocted the “diversity lottery” to keep illegal-alien Irish in the country because the Simpson-Mazzoli Amnesty that year applied mostly to Mexicans. The lottery did bring in more Irish, but it quickly became a means to bring in more Third World immigrants as well.

Treason Lobbyists also created a special policy for Haitian “refugees” because, of course, we had to treat them the same way we treated Cuban refugees [U.S. Immigration Policy on Haitian Migrants, by Ruth Ellen Wasem, Congressional Research Service, March 31, 2010]. Thus do we now have Cuban Haitian Entrant Program.

Now the Great Replacers would use Ukrainians as a stalking horse to continue the browning of America.

Eastern Europe is taking the most refugees from Ukraine: Poland has welcomed some 1.7 million already. But Western Europe is willing to import them, too. The European Union says that its member states must and will take in the millions [How European response to Ukraine refugees differs from UK, by Kaamil Ahmed et al., The Guardian, March 11, 2022]. Some numbers:

Even more generously, Canada, which has a strong Ukrainian immigrant presence, has pledged to accept an unlimited number of refugees [Trudeau: Canada will take as many Ukraine refugees as it can, Associated Press, March 11, 2022]. Australia will accept them, too [Ukrainians could arrive in Australia from this weekend with government issuing 1,000 visas, by James Glenday, ABC, March 2, 2022].

But it’s what happens here that is what matters to the Historic American Nation, which is why the current push to get Ukrainians into the country is so concerning. President Biden has said that America will welcome Ukrainians, but hasn’t yet formulated a plan [Will the U.S. receive Ukrainian refugees?, by Camilo Montoya-Galvez, CBS News, March 11, 2022]. The Department of Homeland Security granted Ukrainians here Temporary Protected Status, and Congress passed a bill that would send $1 billion to aid Ukrainian refugees in Europe [Congress passes $13.6 billion in Ukraine aid along with government funding, by Kelly Snell, NPR, March 10, 2022].

And make no mistake, Ukrainians are itching to get here. A surge of Ukrainian and Russian “migrants” has already hit the U.S.-Mexico border [Ukrainian refugees arriving at the US-Mexico border raise questions for Biden, by Marcela Garcia, Boston Globe, March 14, 2022].

All that is where using Ukrainians to leverage more Third World immigration comes in.

The Treason Lobby is using that border surge to press Two Scoops Biden to eliminate what remains of border security. Leftists are anxious to scrap President Trump’s implementation of Title 42, which permits expedited deportations of illegal aliens for health reasons—in the present case, the China Virus. “This is not who we are as a country,” Senate Majority Leader Chuck Schumer said last week. “Continuing this Trump era policy has defied common sense and common decency. Now's the time to stop the madness” [Pressure to end pandemic restrictions mounts as Ukrainians reach the U.S. border, by Joel Rose, NPR, March 12, 2022].

The “madness” would be scrapping Title 42, but in any case, a message for immigration patriots: Be worried!

Frighteningly, Americans have apparently been stampeded to agreeing to accept Ukrainians. One poll found that 75 percent support this move [Three-quarters of Americans support the U.S. taking in Ukrainian refugees, Ipsos, March 4, 2022]. But by a large margin, more Americans support welcoming refugees from Ukraine than from the Middle East or Latin America. Leftists, unsurprisingly, claim the bias “rooted in racism” [Americans More Accepting of Refugees From Ukraine Than Middle East, Central America, New Data Finds, by Maura Hohman and Noah Pransky, Lx, March 11, 2022].

Thus, while the Regime Media insists they #StandWithUkraine, they bellyache that the same sympathy is not offered to non-white migrants:

When Denmark became the first liberal democracy to tell Syrian refugees to return to their war-torn home in 2019, Russian jets were still dropping missiles in Syria, in an effort to help President Bashar al-Assad's regime regain control of the country. Ukraine is now being pummeled by the same Russian military, forcing more than 2.2 million people to flee to neighboring countries, according to the United Nations. But instead of being met by xenophobia, detention centers and threats of repatriation in the European Union, Ukrainian refugees are being welcomed by European nations like Denmark with open arms.

Let’s face it, the world is paying attention because this is happening in Europe. If this was happening anywhere else would we see the same outpouring of support and compassion? We don’t need to ask ourselves if the international response would be the same if Russia unleashed their horror on a country that wasn't White and largely Christian, because Russia has already done it. In Syria

[MSNBC Anchor Says World Cares About Ukraine Because It Is White, Christian, by Chris Enloe, The Blaze, March 8, 2022]

Many living in invaded and destroyed regions of the Middle East, South Asia and North and East Africa see the inconsistencies. They see the public, policymakers, and the press in the West rushing to the aid of a largely white Christian nation in ways unseen in their respective, largely Black and brown populations and communities. To them it seems like the West is apparently only capable of empathy with its own identity and type.

[We Care More About Ukraine Because the Victims Are White, by Michael Shank, March 3, 2022]

I think the world is watching and many immigrants and refugees are watching, and how the world treats Ukraine and Ukrainian refugees should be how we are treating all refugees in the United States.

[AOC says US should be treating all refugees the way the world is treating Ukrainian refugees, by Sarah al-Arshani, Business Insider, March 1, 2022]

You look at people coming from Haiti, people coming, as I said, El Salvador, Honduras. They were not treated this well. I think we all want the Ukrainian people to be helped, everybody agrees with that, but there is enough pain to go around here.

We’re already seeing climate refugees around the world. … If you think migration has been a problem in Europe in the Syrian War or even from what we see now [from Ukraine], wait until you see 100 million people for whom the entire food production capacity has collapsed.

[Kerry: Ukraine crisis is bad, but ‘wait until you see’ flood of climate refugees, by Jessica Chasmar, Fox News, March 9, 2022].

They must’ve forgotten all the “Refugees Welcome” signs from 2015! Thus will the exodus from Ukraine be used to browbeat Europeans and Americans into accepting an equal number of “migrants” from the Third World, and perhaps even more. It’s just downright unfair to import all those whites and exclude “people of color.” As for this country, Leftists know that accepting a significant number of white refugees without adding POCs will delay the Great Replacement.

And remember this: the Biden Regime plans to double refugee admission to 125,000 this year, almost 10 times more than POTUS 45 Trump’s last year in office [Biden administration plans to double US refugee admissions to 125,000 in 2022, France 24, September 21, 2021]. Biden might just decide to boost that number further and offer Ukrainians as the reason. And again, that could happen with Temporary Protected Status. Any nationality could benefit from either of those moves thanks to Ukrainians.

The one upside to the Ukrainian surge: it will offset at least some non-white immigration. Many Ukrainians could be conservatives—many even religious conservatives—who won’t be automatic Democrat voters.

Bottom line: Elected Republicans better be ready to oppose any effort to use an influx of Ukrainians to mask a massive increase of immigration from the Third World.