Undercover Economist Underperforms On Why Poor Countries Are Poor 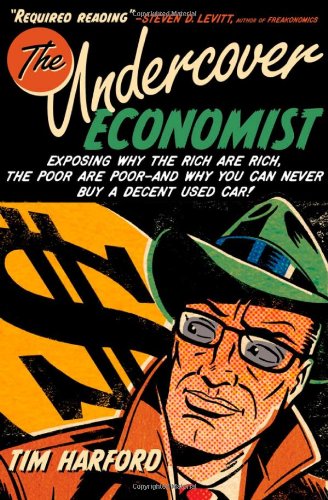 introduction to economics. (I reviewed it in the New York Post.) Now, Reason magazine's website is running a chapter from the book describing Harford's visit to Cameroon in West Africa under the headline “Why Poor Countries Are Poor.”

“They call Douala the 'armpit of Africa.' Lodged beneath the bulging shoulder of West Africa, this malaria-infested city in southwestern Cameroon is humid, unattractive, and smelly.”

That reminds me of an old friend from Douala, the largest city in Cameroon, who was getting his Ph.D. at UCLA a quarter of a century ago. On the rare occasions when the July temperature in Westwood reached 90 degrees, he'd complain bitterly about how hot it was. When I'd point out that his hometown was just north of the equator and it had to be 90 degrees there every day, he'd respond:

“Ah, but, Steven, you don't understand. That is the soooooothing African heat.”

So, while Cameroon might seem like an armpit to you, me, or Tim Harford, to 16 million Cameroonians, it's home. And I wish them well.

Harford's explanation for Why Poor Countries Are Poor is corrupt and predatory government and other institutions, which he documents with many depressing examples from his visit.

He goes on to make the ambitious claim:

“It is not news that corruption and perverse incentives matter. But perhaps it is news that the problem of twisted rules and institutions explains not just a little bit of the gap between Cameroon and rich countries but almost all of the gap.”

Well, yes, that is indeed news to me. For one thing, there are obvious noninstitutional problems with trying to get work done in Cameroon, such as endemic malaria and all that soothing African heat that just makes you want to lie down and take a nap.

But Harford's assertion raises an obvious question: how can he know “why poor countries are poor” from inspecting just one of them? Wouldn't it also be useful to compare countries?

Surely, a few of the dozens of sub-Saharan African countries must have better policies and institutions than Cameroon and thus must have closed “almost all of the gap”?

Unfortunately, it turns out that by African standards, Cameroon's government is not so bad. Granted, it's a completely crooked dictatorship run by a gang representing only the interests of one of the many ethnic groups. But it's not a civil war zone like the Congo or Liberia. Over the decades, the government has more or less kept the peace. The CIA World Factbook notes:

“Cameroon has generally enjoyed stability, which has permitted the development of agriculture, roads, and railways, as well as a petroleum industry.”

With a per capita income of $2,000, Cameroon is well above average in sub-Saharan Africa's income tables.

So are there African exceptions that prove Harford's proposed rule that untwisting institutions could close almost all the income gap?

The highest African GDP per capita, at an amazing $50,200, even higher than the $41,200 in the U.S., is found in tiny Equatorial Guinea. But that's solely because of big oil strikes there. The CIA World Factbook reports:

“Despite the country's economic windfall from oil production resulting in a massive increase in government revenue in recent years, there have been few improvements in the population's living standards.”

Then comes South Africa, which I think you'd agree is not representative, and then one of the continent's success stories, Botswana, at $10,100, just richer than Mexico. Botswana's wealth owes to having big diamond mines and a small population, but its government deserves credit for not stealing many of the diamonds or wasting the income.

The richest representative African country is Ghana at $2,500, 25 percent better than Cameroon. Although Ghana had notoriously bad government in the post-independence era, it has enjoyed relatively public-spirited rule recently and is now considered a democracy. So, the difference of $500 per year in per capita income between Ghana and Cameroon might represent the bonus that accrues for fairly good government by African standards. That doesn't close much of the gap with the West.

So, why do African countries mostly have such bad governments? Why haven't they done what the Chinese did under Deng from 1978 onward and unleash the power of free enterprise?

Well, some have tried. But the results have been less impressive than in China.

The fundamental problem is that it doesn't really pay in Africa to be a good ruler. In  China, the Communist Party dictatorship finally figured out that if they merely stopped perpetrating the wacky ideological brainstorms of Chairman Mao, such as ordering the peasants to build steel mills in their backyards and inciting junior high school students to assault and batter their teachers, the economy would improve. If they then allowed foreign investment and the government invested in education and infrastructure, the Chinese people could generate so much wealth that the Communist Party bosses would get filthy rich.

In contrast, the ruling classes of sub-Saharan African countries have a lower opinion of the wealth-generating capacity of their own people. They don't see much point in investing in their own people because they don't think their people could repay the investment. So, if there is mineral wealth in their country, the Big Men fight civil wars to get the checks from the foreign oil and mining companies. And if there are no minerals, they just shake down the populace for petty bribes.

Now, it could be that the African elites are blinded by stereotypes about Africans, that they indulge in the “soft bigotry of low expectations.”

Or it could be that they are right.

I suspect the answer lies in between, but the whole concept is almost unthinkable to Harford. He rules out the possibility that the African ruling classes view of their own people's potential is right a priori:

“It's all too tempting for the visitor in Cameroon to shrug his shoulders and explain the country's poverty by presuming that Cameroonians are idiots. Cameroonians are no smarter or dumber than the rest of us. [Emphasis added.]

To prove that assertion, Harford [email him] offers up this remarkable sentence, a classic example of Occam's Vegematic slicing and dicing logic:

Seemingly stupid mistakes are so ubiquitous in Cameroon that incompetence cannot be the whole explanation.”

Well, okay … But could incompetence be part of the explanation?

Napoleon supposedly said something like, “Never attribute to malice that which can be adequately explained by incompetence.” And that's a wise rule in thinking about Africa.

We know from Richard Lynn and Tatu Vanhanen's groundbreaking 2002 book IQ And The Wealth Of Nations that the correlation between IQ and per capita income across countries is a remarkably high r = 0.73. Furthermore, dozens of intelligence studies over the decades have shown that the average IQ in Africa is very low, somewhere around 70.

We also can surmise that the low African average IQ is probably being depressed by environmental causes like bad nutrition and disease, since 70 is about 15 points (or one standard deviation) lower than the average IQ of African Americans, who share at least 80 percent of their genes with West Africans.

And, in fact, so far we know of two specific environmental shortfall—shortages of the micronutrients iodine and iron—that according to a 2004 report by UNICEF appear to lower national average IQs in the Third World by a few points. Western countries have been fortifying salt with iodine and flour with iron to prevent cognitive damage since before WWII. But most of the Third World does not.

I've written about this UN study repeatedly in VDARE.com, but it has otherwise gotten almost zero attention in the Western press because the whole topic of African IQ is banned.

At Leeds University in England, for example, Prof. Frank Ellis is currently the subject of a furious campaign on campus and in the press against his right to teach for merely mentioning such forbidden topics.

Fortunately, this taboo does not exist in Africa, so the press there has taken up the issue, as has the forward-looking government of Ghana. Whether African governments have the money, skills, and motivation to institute effective fortification of staple foods without international help is unknown, however.

Just as it proved in America in the 1930s, micronutrient fortification could be a highly cost-effective way to raise the overall competence level of African populations. As a conference in Copenhagen hosted by Bjorn Lomborg in 2004 pointed out, micronutrient fortification makes more sense than any other kind of foreign aid, other than AIDS prevention.

But we can't do much to help Africans with this problem if we're not allowed to talk about it.

The American Conservative. His website www.iSteve.blogspot.com features his daily blog.]