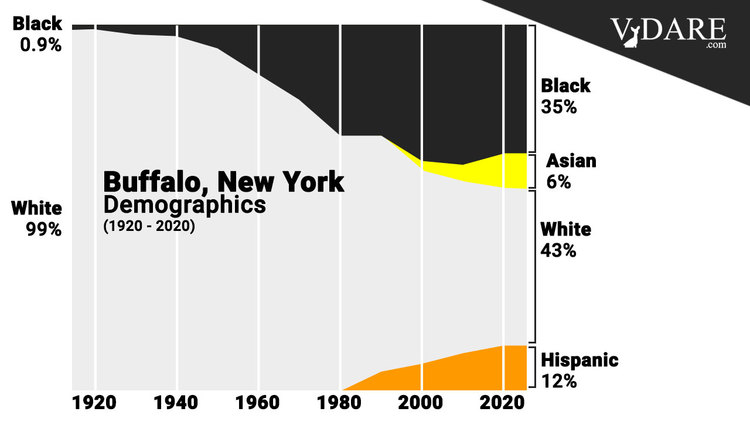 Was The Buffalo Massacre (Bad!) Caused By The Great Replacement (Undeniable)?

While chronicling the Main Stream Media–unreported phenomenon that we call Immigrant Mass Murder (641 dead in 93 documented cases since 1973), we regularly note that mass murder is not a job that Americans won’t do—it’s just that they don’t do it as often as immigrants. The latest case in point: the shocking Saturday night killings in Buffalo, NY by Peyton Gendron, an 18-year-old white man [What we know about Buffalo supermarket shooting suspect Payton Gendron, CNN, May 16, 2022].

According to what appears to be his manifesto, Gendron was motivated by serious racial concerns, particularly by what he saw as the displacement of his race by anti-white government policies, above all mass non-traditional immigration—the “Great Replacement.”

At this point, I must of course stipulate that I personally, and as Editor of VDARE.com, AM OPPOSED TO VIOLENCE—what the Left, in its criticism-free cocoon, is allowed to laud as “Direct Action” in the case of Antifa and BLM.

But I do so with considerable bitterness. Thus VDARE.com was not involved in the 2017 Charlottesville Unite The Right rally, was not invited to speak, did not promote it, did not attend.

But it did us no damned good at all. In the subsequent lynch mob hysteria, we were still demonetized by PayPal, a crippling blow that turned out to be just the beginning of a systematic campaign of repression (see here, here, and here, etc.).

And it’s entirely likely that the Buffalo shootings will bring on another wave of repression.

Because, in case anyone hasn’t noticed, our enemies are not acting in good faith. They are born-again communists, left-wing Totalitarians. They simply want to repress all opposition.

But the truth is that the Great Replacement is not a “theory”—it is a fact.

And it is nowhere more a fact than in Buffalo, where the white aka American population fell from 99% in 1920 to 43% in 2020. (Note the recent significant impact of two new, 1965 Immigration Act–imported minorities, Hispanics and Asians.)

Also significantly, note that the real collapse of Buffalo’s white population began after 1950. That was in the wake of the Supreme Court’s Shelley v. Kraemer decision, which meant that white working-class communities were no longer allowed to shelter themselves from the impact of the black Great Migration from the South.

It is simply inconceivable that such an enormous transformation could happen without consequences.

“Folks like me who are Caucasian of European descent — for the first time in 2017 we’ll be an absolute minority in the United States of America,” Biden said. “Absolutely minority. Fewer than 50 percent of the people in America, from then and on, will be white European stock. That’s not a bad thing. That’s a source of our strength.”

This is totally normal and not a little bit weird at all. pic.twitter.com/E0xkk79nAA

And what exactly did Southern Poverty Law Center enforcer Mark Potok mean by having this on his wall?

Most people have pictures of their family in their office to inspire them. Mark Potok of the SPLC tracks the decline of the White population on his office wall. pic.twitter.com/PEAeAvFhRJ

(That’s a genuine screenshot from a documentary called  Alt-Right: Age of Rage, by Daryle Lamont Jenkins in 2018—if you want to see it for yourself go to TubiTv and go to 23:08.)

The Ruling Class’s problem is not that guerrilla Dissident Right websites, and the heroic Tucker Carlson, have Noticed the Great Replacement.

It is that the Great Replacement is undeniably happening—and that it is the result of Federal Government policy.