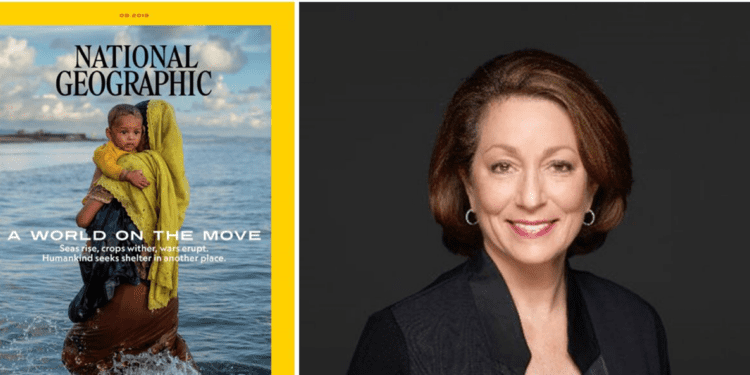 Founded in 1888 as the journal of the National Geographic Society, National Geographic took on its current photography-heavy, serious travel magazine style in 1905. But even though its stated purpose during the Cold War was to provide as balanced a view as possible of life behind the Iron Curtain, the magazine was never openly Leftist—until 2014, when Susan Goldberg was appointed Editor-In-Chief. Since then, it has gone the full SJW. And Goldberg seems to be very much the “type” who, again and again, I have found to be leading this assault on science, empirical evidence and the interests of European peoples.

One need only consult the current (August) edition of the magazine. A lead article (The first Europeans weren’t who you might think, by Andrew Curtis) asserts that Europe has been

…a melting pot since the Ice Age. Europeans living today, in whatever country, are a varying mix of ancient bloodlines hailing from Africa, the Middle East, and the Russian steppe.

In an era of debate over migration and borders, the science shows that Europe is a continent of immigrants and always has been.

And it quotes Harvard geneticist David Reich as saying:

There are no indigenous people—anyone who hearkens back to racial purity is confronted with the meaninglessness of the concept.

This is almost criminally misleading. Obviously, there have been many different migrations into Europe and consequent intermixture between genetic populations over very long periods of time, leaving traces (albeit sometimes vanishingly small) of genes from all over the world. But this has no bearing whatsoever on the proven fact that the human population can be divided into roughly ten clearly distinct genetic clusters—including European whites—which very precisely parallel traditional races.

It also ignores the fact that, to a great extent, these races have been isolated from each other until relatively recently—hence the genetic “clusters”—meaning that the fact of race allows numerous important predictions to be made, about how you develop, what age you go through puberty and even response to certain medicines.

National Geographic writer Curtis also commits Lewontin’s Fallacy: just because there is lots of diversity within a race, it does not mean that race is meaningless. If lots of small differences between races all push in the same direction, which they do because races are genetic clusters adapted to different ecologies, then “race” becomes a meaningful, scientific concept which allows correct predictions to be made. (For a more detailed discussion, see J. Philippe Rushton: A Life History Perspective, by Edward Dutton, 2018.)

In other words, National Geographic’s lead article is a deliberately mendacious attempt to make people think that there has always been “multiculturalism.” It is just empirically wrong to state that Europe has always been subject to immigration of the current level and type and illogical to claim this proves the “meaninglessness” of race. (Indeed, elsewhere National Geographic source David Reich has himself asserted that race is more than “skin deep” and, scientifically speaking, amounts to “something.” [Interview with Reich in Superior, by Angela Saini, 2019, p.122]

So what kind of “Editor-In-Chief” would permit such a misleading, politically motivated and out-and-out empirically inaccurate piece of work to be the lead article in National Geographic?

Indeed, what kind of Editor-In-Chief would earlier publish a special issue dedicated to debunking the concept of “race” and apologizing for the “racist” articles her magazine had published in the past? [“For Decades, Our Coverage Was Racist. To Rise Above Our Past, We Must Acknowledge It,” May, 2018]

(Goldberg was especially exercised that a 1916 National Geographic article on Australian Aborigines reported they “rank lowest in intelligence of all human beings.” “It’s very difficult to read something like that,” she is quoted as saying. [National Geographic’s editor-in-chief opens up about racism in magazine’s past, by Josefin Dolsten, Pittsburgh Jewish Chronicle, April 11, 2018] It may be “difficult to read,” but of course it's simply true.)

As I have shown now in a series of VDARE.com articles, there is a certain “type” that seems to be characteristically involved in the current anti-science jihad. In Britain, at least, these are people from privileged, wealthy backgrounds who have attended extremely good schools (in Britain, just the top 7% who go to private a.k.a. “public” schools) but nevertheless do not obtain undergraduate places at the country’s best universities. In addition, they tend to be members of ethnic minorities: Jewish or Indian. Susan Goldberg appears to be an “across the pond” version of precisely this phenomenon.

Born in Ann Arbor, Michigan, in 1959, Susan Goldberg is the daughter of highly educated parents. Her father was a professor at the University of Michigan, while her mother was a librarian. [National Geographic’s Leader: Northern Michigan “So Magical,” by Luke Haase, The Ticker, September 11, 2018] In other words, she can hardly be said to have had to struggle to get into the competitive worlds of academia and journalism.

Although Goldberg did not attend a private school, she was educated at Huron High School in Ann Arbor, long regarded as one of the best public schools in the United States. But she then went to Michigan State University—a competent school but not particularly prestigious or sought after. In 2015, for example, Michigan State admitted 66% of those who applied. There she studied journalism.

When Goldberg was 20, she dropped out of college after working as an intern for 8 weeks at the Seattle-Post Intelligencer and being offered a job there. She finally graduated from MSU in 1987, by then working for the Detroit Free Press, where she was the first female to cover the state capitol. An extremely successful journalistic career followed: a shared Pulitzer Prize as part of the staff of the paper that reported the 1989 Loma Prieta Earthquake, deputy managing editor of USA Today, Bloomberg…until her appointment as editor of National Geographic in 2014 .

And, like some of her UK equivalents, Susan Goldberg is Jewish, a fact that made headlines in The Times of Israel when she presided over her special “Race” issue in April 2018. [First Female Jewish Editor Dedicates April Issue of National Geographic to Race, Times of Israel, March 20, 2018].

Goldberg was unselfconsciously upfront about her own ideological bias and lack of emotional distance from the subject of race in a mea culpa editorial that made international headlines:

I’m the tenth editor of National Geographic since its founding in 1888. I’m the first woman and the first Jewish person—a member of two groups that also once faced discrimination here. It hurts to share the appalling stories from the magazine’s past.

[For Decades, Our Coverage Was Racist. To Rise Above Our Past, We Must Acknowledge It, By Susan Goldberg, National Geographic, April 2018]

Goldberg added fascinating details: “Race is not a biological construct…but a social one that can have many devastating effects.” She stated this in an editorial illustrated by pictures of people of different races, all looking conspicuously different for manifestly biological reasons. She also lamented that in the past “National Geographic did little to push its readers beyond the stereotypes ingrained in white American culture”—which, naturally, is irrelevant to whether or not the stereotypes are true, as most racial stereotypes are. [The Things They Say Behind Your Back: Stereotypes and the Myths Behind Them, By William Helmreich, 1982]

Goldberg’s interview with the Times of Israel, cited above, also reveals that, like British SJW Dr. Jess Wade, Goldberg believes that females, and other minorities, should be promoted regardless of their competence, simply because they are female: “When I’m no longer the first woman editor somewhere then we are going to be living in a lot better place.”

So Goldberg is motivated by a quest to empower people like her, elaborately disguised as a display of virtue.

However, Goldberg, despite dismissing “race” as a “social construct,” operates, in her own life, precisely as race realists like the late J. Philippe Rushton would predict.

According to Rushton’s “Genetic Similarity Theory” we are attracted to people who are are optimally genetically similar to ourselves, because this elevates the degree to which we pass on our own genes. For this reason, we are disproportionately attracted to members of our own “race” or “ethnicity” and more likely to become friends and partners with such people. [J. P Rushton’s Theory of Ethnic Nepotism, by Frank Salter and Henry Harpending, Personality and Individual Differences, 2013]

Consistent with this, Goldberg has spent much of her life pursuing the interests of her “social construct.” She told the Pittsburgh Jewish Chronicle’s Dollsten that she was active in the Habonim Labour Zionist Youth Movement and, aged 17, she moved to a kibbutz in southern Israel. Both of her husbands appear to have been Jewish.

In other words, “race” is a “social construct” and people should be blind to it and in no way deliberately associate along racial lines…unless they are Susan Goldberg.

So, in our quest to “know our enemy” we find yet another privileged and advantaged ethnic minority who preaches the non-existence of “race” to the white world…while clearly promoting the interests of other groups.

But perhaps, on the plus side, readers will become tired of Goldberg’s constantly denigrating them—helping to accelerate National Geographic’s ongoing sales collapse, like that of other PC-plagued franchises, from 12 million in the 1980s to 6.5 million per month today.

Lance Welton [Email him] is the pen name of a freelance journalist living in New York.