Also by Sam Dickson: Sam Dickson’s Statement To Charlottesville Inquiry: “The Police Were Acting Under Orders. WHO GAVE THOSE ORDERS?”

Heroism is the brilliant triumph of the soul over fear: fear of poverty, of suffering, of calumny, of sickness, of isolation and death—Henri-Frederic Amiel 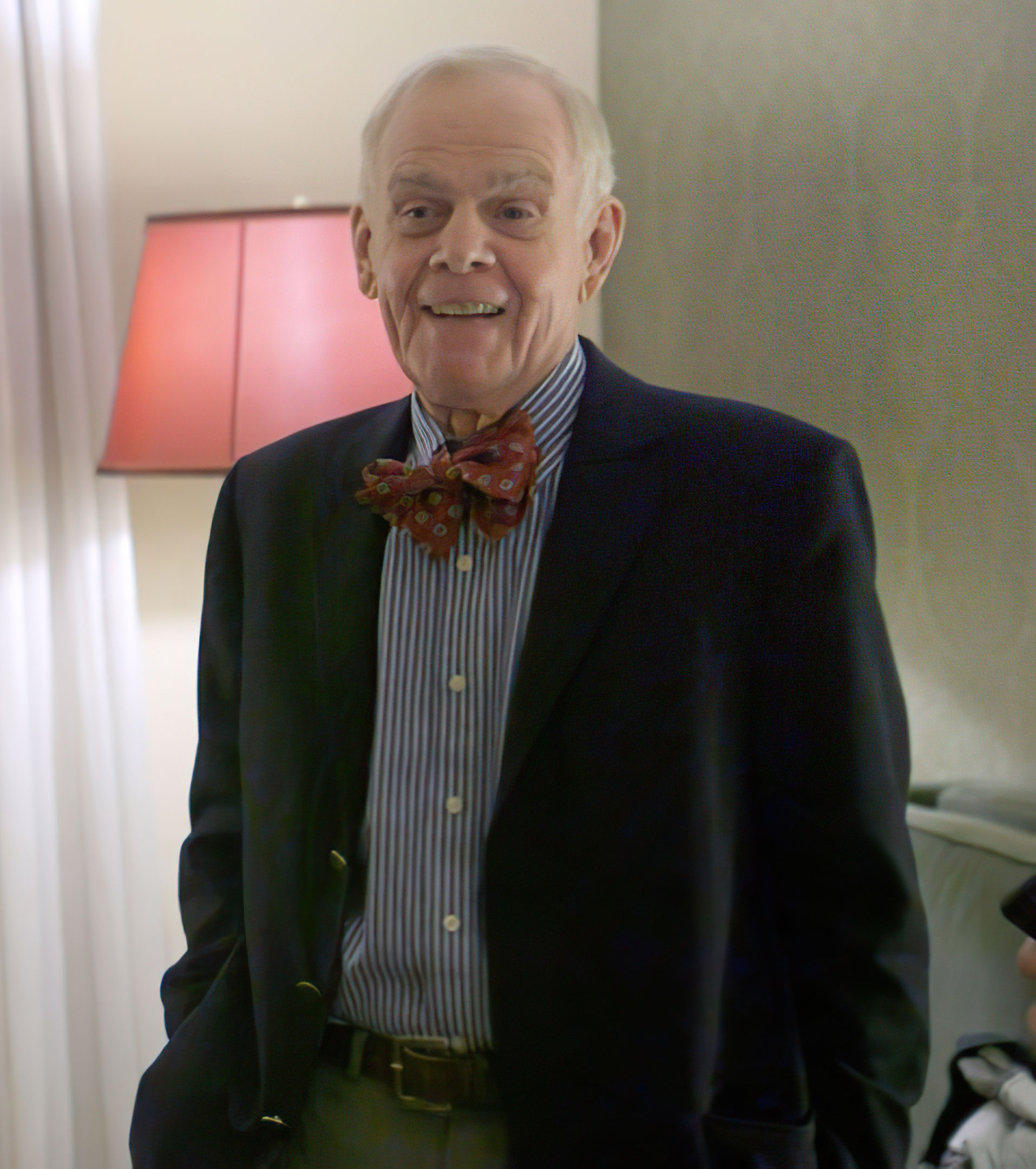 William “Bill” Regnery II died after a long and gallant battle with cancer on July 2, 2021. The words of Amiel quoted above can be deservedly used to describe this great man.

With his departure a noble life, a hero’s life, has ended, but he leaves behind a legacy of courage and loyalty as an inspiration for his comrades in the struggle for the survival, salvation, and triumph of European man. At the grave of a hero, men draw renewed resolution.

Our people at large may not know what they have lost. But those of us who were Bill’s friends and colleagues know.

And, someday, posterity in the European Christian world will know. They will remember him with gratitude and mark his life as an example of what every brave, noble and loyal European should strive to be.

I first met Bill Regnery at the American Renaissance Conference. It was to me a great honor to meet a descendant of the resplendent Regnery family, which is among the few upper-class families who have remained true to our people over generations and in the face of calumny from our people’s enemies.

Bill and his ancestors were that rare thing: Nobles who stressed the word “oblige” over “noblesse” in the common saying, “Noblesse oblige.”

I had long been gratefully aware of the existence of this family.

When I was in high school in the 1960s, it was difficult, far more difficult than young people today can grasp, to find any information contrary to the anti-White Hate that already was the virtually exclusive narrative in the schools and the media.

The internet did not exist. No bibliography existed by which someone like me who saw through the propaganda line being peddled in his high school could even find the titles of dissident books. It was brutally difficult for a “based” (to use the modern term) European American just to find a book that was on our side.

It was then that I learned of the Regnery Publishing House. Members of the Regnery family had founded the company to provide a means—even with only limited means of distribution—for the publication of truthful books refuting the Regime’s line.

I often frequented used bookstores. When I saw “Regnery” on the spine of a book, the name sprang off the covers and alerted me that it was most likely a book that would tell the truth and one that I needed immediately to buy and read.

I had not expected that I would have the honor of actually meeting a member of the Regnery family, much less that we would enjoy a long if occasionally troubled friendship. Upon his introducing himself, I politely bowed to him and expressed my gratitude for what they had done and meant to me in my youthful development.

Bill and I went on to enjoy a friendship, a comradeship, that lasted for almost three decades of mutual work on behalf of the despised Founding Stock of America and its related European cousins.

Bill was justly, albeit quietly, proud of his ancestors and his pride was merited. As Plato said: “Hereditary honors are a noble and splendid treasure to descendants.” The descendants of the Regnery family will bear their name with pride in our people’s future homeland.

Bill fulfilled his hereditary legacy and carried it further.

Bill grew throughout his life. His understanding of the issues of race and ethnicity and the imperative of our people exercising their right to a nation-state of their own, a right claimed by the Zionists and their non-Jewish supporters but denied to us by polite, socially-acceptable opinion, grew slowly but steadily.

Bill started out in the world of conventional conservatism at the University of Pennsylvania, joining the Intercollegiate Studies Institute which numbered among its founders the late William F. Buckley, Jr. Bill left the University of Pennsylvania shortly before graduating to work in the presidential campaign of Senator Barry Goldwater against Lyndon Baines Johnson in 1964.

Bill was drawn to the important and critical issues of race, immigration, improvement of the genetic stock and an America First foreign policy. As his thinking on such matter grew and matured this ineluctably aroused the ire of the leadership of the Intercollegiate Studies Institute, which eventually expelled him from its Board of Directors in 2006. Dealing with issues that matter is something that cuckservatives—as they are now deservedly known—cannot afford. Bad for business. Socially risky. Better to stick with the safe issues of “responsible conservatism,” issues that never cost anyone a job—precisely because they do not matter.

It cannot be denied that Bill was hurt by this nasty act on the part of colleagues with whom he had worked, and who had accepted his generosity, for some 45 years. But he was better off without them and severing from such unworthy company was a necessary prerequisite to his own growth.

Bill’s understanding and his certitude grew year by year. This was necessary. As Thomas Carlyle said: “He who would do faithfully needs to believe firmly.”

Bill encountered the usual problems that all of us experience in such activities: the ingrates, the cranks, the prima donnas, the backbiters. I myself unfortunately was deceived for a short period of time into opposing him, a mistake for which I sincerely apologized, an apology that he without hesitation accepted.

He founded numerous Movement institutions, including The Charles Martel Society and The Occidental Quarterly. Some of these efforts bore fruit. Others seem to have come to a sad end, such as the once brilliantly-successful National Policy Institute, whose website now appears to have vanished.

But Bill was not demoralized by reverses and betrayals. He soldiered on undeterred.

He was always a quiet, thoughtful voice of guidance and advice. He was unfailingly polite and kind, a true gentleman.

He did not seek the limelight or acclaim, although contrary to recent claims in the Regime Media he was not a recluse. He was simply modest. Something the Regime Media journalists, drunk on themselves, probably cannot fathom.

After Bill’s death a friend asked me to tell some anecdotes about him. I racked my brain but could not think of any…precisely because he was so polite, so self-effacing, so gentle that he simply did not generate the stuff that anecdotes are made of.

I spoke with others seeking such anecdotes. There was one. American Renaissance Editor Jared Taylor commented on Bill’s custom of wearing shoes with no socks, a bizarre peculiarity of upper class WASPs.

This was the case with Bill. He was diagnosed with cancer of the larynx. The initial prognosis was very encouraging. The next prognosis not so good but still hopeful. Step by step the disease advanced, the prognoses grew darker and ultimately the sad news was given by his doctors that his condition was terminal.

Bill faced it with quiet courage. He did not whine or engage in self-pity. Death ultimately came to him as a friend, not as an enemy. My favorite Greek philosopher Epictetus can be quoted in reference to how Bill met his death: “He whom the inevitable cannot overcome is unconquerable.”

Bill’s sufferings have provoked gales of happy, gleeful comments from the readers of the New York Times [William H. Regnery II, 80, Dies; Bankrolled the Rise of the Alt-Right, by Clay Risen, July 16, 2021] and the Huffington Post [William Regnery II, Reclusive Millionaire Who Financed American Fascists, Dead At 80, July 16, 2021] (the latter authored by the notorious communist doxer Christopher Mathias). The comment thread on HuffPo in particular is simply full of gloating over his death, expressing the hope that it was painful and that others like him will also die of cancer.

Readers who have strong stomachs should take a look at these comments. As you do, keep in mind that the Regime Media has eagerly championed the censorship of dissenting views (“Hate” as they call it), but are all too happy to flaunt this sick material. It will give you an understanding of just how much these people hate us. It will strengthen you to meet the challenges of the struggles to come.

These are the voices of the diseased of mind and the sick of soul. Such people must hope that there is no God and that the pagan Greeks’ awful law of Nemesis and St. Paul’s warning “As ye sow so shall ye reap” can be disregarded.

This hatred from those who desire our people’s extinction would have gratified Bill—as it should gratify all of us. He would be thrilled to see the Leftist Buzzfeed calling him “…the most influential racist you’ve never heard of”[This Man Used His Inherited Fortune To Fund The Racist Right, July 23, 2017].

I know that Bill’s indifference to elite opinion pained his wife and family. This is understandable. We regret this but we are grateful that they shared their husband, father, brother and cousin with us. Let us all hold Bill’s family members in our minds with our grateful thanks and our wishes that they be comforted in their grief.

Bill leaves behind six children and twelve grandchildren. He was not a “genetic dead end,” to quote one of his own memorable phrases. May Bill’s descendants flourish and multiply.

He also remains forever linked to us. To quote Thomas Carlyle one more time: “Heroism, the Divine relation which, in all times, unites a great man to other men.”

William H. Regnery II will be for all time united to us.

Farewell, Bill. You dared it. You met the mark.

Sam Dickson (email him) is a lawyer and activist.