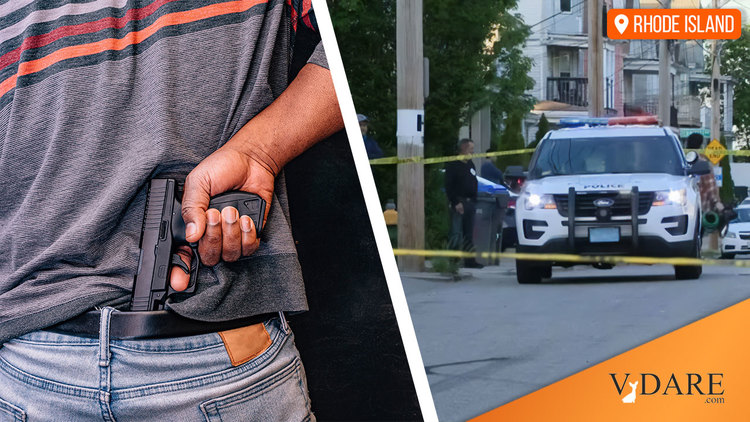 Re: The “Leaded Law” And Mass Shootings—Poor Black Marksmanship Is Saving Lives

From: Paul [Email him]

A report from the NY Post talks about a "mass shooting" in Rhode Island:

The targeted attack marks the largest shooting in the city’s history, according to Clements. Four or five guns were allegedly involved.

“We don’t shy away from the fact that we have a gun issue in this city,” Clements said.

“It’s unfortunate that young men in this community have no regard for life at times. They fire the guns willingly at each other, and this is the case here.”

Shooting in Rhode Island leaves as many as 9 injured,

They don't have a gun problem; they have a people problem.

James Fulford writes: This is what I call a "Leaded Law" shooting. It's different from a "mass shooting" in that, in spite of the fact that there are there are a mass of people, and they're shooting, few or no people are killed.

“We find as many as nine, eight or nine victims. We believe it’s going to be nine victims,” Police Chief Hugh T. Clements Jr. said.

All but one of the injured men drove themselves to the hospital. Three people are believed to be in critical condition, the chief said.

The targeted attack marks the largest shooting in the city’s history, according to Clements. Four or five guns were allegedly involved.

A squabble between two local gangs of unnamed color, but I feel confident in saying they're black, because of two factors: the lousy marksmanship, and "If it was a white guy, they would have told us"