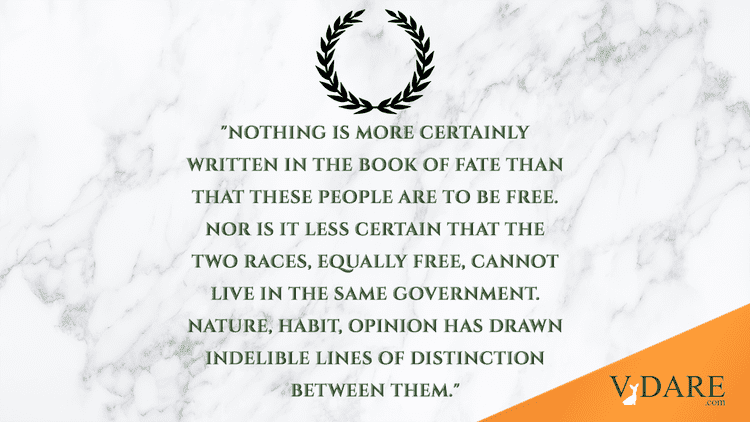 A Reader Comments On Thomas Jefferson's Prophecy That "The Two Races, Equally Free, Cannot Live In The Same Government"

Re: James Fulford's blog post Jefferson's Prophecy, The Rest Of The Story: "The Two Races, Equally Free, Cannot Live In The Same Government"

From: An Anonymous PhD. [Email him]

I read with interest James Fulford's post on the "selective editing" of Jefferson's words on his memorial in Washington, D.C. You are absolutely correct to point out Jefferson's true views on the races. However, Jefferson wrote much, much more on the subject.

Perhaps his most detailed discussion of race is to be found in Query XIV in "Notes on the State of Virginia." (1785) Jefferson discusses a proposal, offered in the Virginia colonial legislature, to emancipate, then deport slaves, and follows with this astonishingly prescient prediction:

'It will probably be asked, Why not retain and incorporate the blacks into the state, and thus save the expence of supplying, by importation of white settlers, the vacancies they will leave? Deep rooted prejudices entertained by the whites; ten thousand recollections, by the blacks, of the injuries they have sustained; new provocations; the real distinctions which nature has made; and many other circumstances, will divide us into parties, and produce convulsions which will probably never end but in the extermination of the one or the other race."

Jefferson further discusses the characteristics of the Negro—the polite word at the time—with extraordinary accuracy:

"They seem to require less sleep. A black, after hard labour through the day, will be induced by the slightest amusements to sit up till midnight, or later, though knowing he must be out with the first dawn of the morning.

They are at least as brave, and more adventuresome. But this may perhaps proceed from a want of forethought, which prevents their seeing a danger till it be present. When present, they do not go through it with more coolness or steadiness than the whites. They are more ardent after their female: but love seems with them to be more an eager desire, than a tender delicate mixture of sentiment and sensation. Their griefs are transient. Those numberless afflictions, which render it doubtful whether heaven has given life to us in mercy or in wrath, are less felt, and sooner forgotten with them.

In general, their existence appears to participate more of sensation than reflection. To this must be ascribed their disposition to sleep when abstracted from their diversions, and unemployed in labour. An animal whose body is at rest, and who does not reflect, must be disposed to sleep of course. Comparing them by their faculties of memory, reason, and imagination, it appears to me, that in memory they are equal to the whites; in reason much inferior, as I think one could scarcely be found capable of tracing and comprehending the investigations of Euclid; and that in imagination they are dull, tasteless, and anomalous."

I highly recommend Merrill Peterson's "The Portable Jefferson." a standard college text for decades, if you are interested in reading more of Jefferson's views on the subject.

James Fulford writes: You can also read all of Thomas Jefferson's writings on WikiSource. The point is that Jefferson was a believer in human liberty, including that of blacks, but he was also a Southern planter who knew blacks personally, so had no illusions about them.