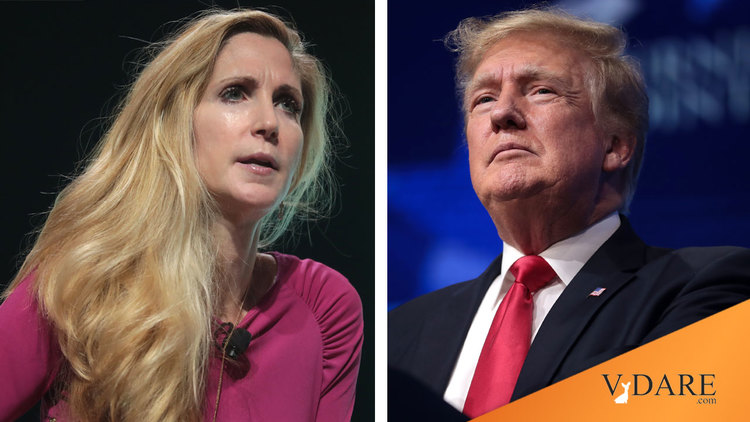 Re: ANN COULTER: “Sorry I Murdered You With My ‘Hate Speech’”

As a long time reader and financial supporter of your website I feel entitled to do a little complaining. Specifically about Ann Coulter. I used to enjoy Miss Coulter’s writing and looked forward to her essays. Not so much anymore. Ann has succumbed to a severe case of Trump Derangement Syndrome. Her hatred of the man is positively pathological at this point. She cannot write about any topic without indulging in the most crass, vulgar, gratuitous and juvenile criticism of Trump.

As the old saying goes: “Hell hath no fury like a woman scorned.”

Please try to keep the focus on immigration.

We know Ann well and are very fond of her. Of course, I wish she’d stop taking pot shots at Trump. But the fact is she wrecked her career for him in 2015-2016 (notice she no longer appears on TV) and he totally betrayed her—see  Trump Rejecting Ann Coulter's Wise Counsel—Which Got Him The Presidency.   You are right that hell hath no fury etc.

I suspect the problem is the Kushners. There was a faction in Trump World that was always hostile to her, probably because she wanted him to focus on immigration. Of course, she was right and they were wrong.

We are very aware that we have to focus on immigration, even though other issues, e.g., black-on-white crime, do get more attention.

But I must disagree with you about Ann’s recent column. The issue of “Hate Speech” is critical to VDARE.com. It’s the reason YouTube gave when they nuked our channel and why we’ve lost the major bulk email providers. The communists intend to ban ALL criticism of immigration as “hate speech.” We have to fight it out on this line if we are to keep immigration patriotism in public debate at all.