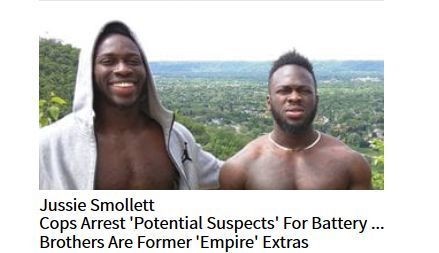 From: A Long-Time Realist Reader [Email him]

In looking at the Jussie Smollett hoax, it seems that there's one angle that's been missed by everyone, including Steve Sailer, and that is this:It proves everything that race realists say about blacks.

Think about it. Race realists say that blacks are less intelligent, possess lower impulse control, and have poor future time orientation. All of those elements were present in this hate hoax. Frankly, it was so boneheaded that it never had a prayer of succeeding. The premise was so outlandish that it sparked disbelief from the get-go. And its execution was so awful that there was no way a triple-digit IQ was involved.

For example—Smollett paid the Nigerians WITH A CHECK. A CHECK. Not cash. Could it have been more traceable?

He didn't make sure that the security camera was pointed in the right direction.

He vastly overestimated his own fame - from the start the idea that he'd have been recognized by two MAGA types was preposterous.

He brought the cops in, who actually investigate things. Had he not done that, he'd likely be scot free and believed right now.

I could go on and on. The Nigerians managed to buy all the supplies in perfect view of a video camera in a store nearby where the hoax took place.

None of them had a clue of what to do after the story began unraveling - the same level of future time orientation of the black who steals a car and then has no idea what to do with it.

And the whole thing began with poor impulse control because he wanted more money from the show.

Smollett has, unintentionally, validated everything that commentators like Paul Kersey say.