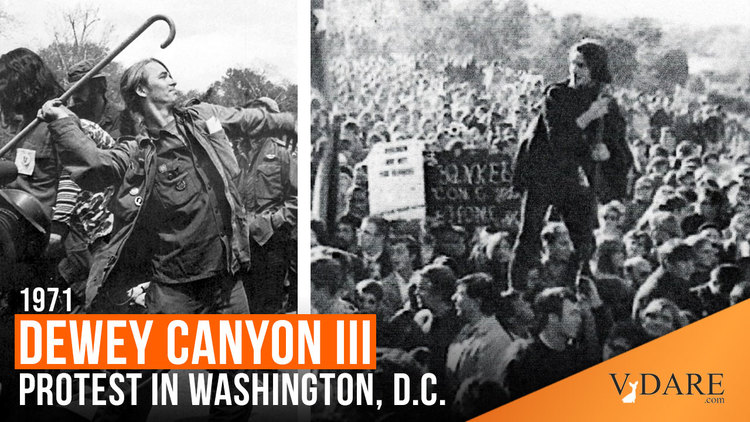 A Reader Remembers The "Mostly Peaceful", Definitely Not "Insurrectionary" Protests In Washington During The Vietnam War

Re: CAPITOL "INSURRECTION" HOAX: How Our Lying Press Would Have Spun Jan 6 Protest If Trump Were A Democrat [VIDEO]

From: Dale Gribble [Email him]

Not all insurrections are bad, as VDARE.com has pointed out with recent examples:  2011 occupation of Wisconsin State Capitol and recent occupation of a state capitol by BLM thugs (er, peaceful protestors).

I remember now,  those were OK because they occurred in daylight, or was it night? 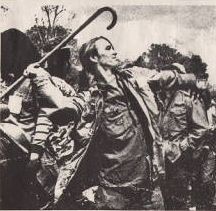 I was reading some 50-year anniversary pieces and the Vietnam Veterans Against the War's Capitol protest named "Dewey Canyon III" came up in the news feeds. (WikiPedia says it was a peaceful protest and illustrates it with the picture at right.)

Yes,  there’s plenty to beef about with the Vietnam War, except the true blue Communist angle to the enemy.

You have to drill down pretty far into Google search to find any mention of the real terrorism and insurrection some in the Vietnam Veterans Against the War considered to end the war.

Incredibly some puff pieces on the protest now laud the medal-throwing protests.

Part of the "Swift Boating" of John Kerry in 2004 was whether he supported the Vietnam Veterans Against the War to the detriment of troops on duty.

Some alleged Kerry attended meetings where more radical elements in the group discussed killing politicians who supported or did not oppose strongly enough the war, which at that time our involvement was winding down.

Kerry denied being present when other members discussed killing senators and conveniently lack of documentation leaves it up to his word against others.

Somehow I don’t see that standard applied to President Trump and his allies storming (er, being let in) the Capitol.

In the 1970s, the Deep State succeeded in removing a sitting President, and the Democratic Party succeeded in throwing the Vietnam War.

All by VDARE.com editor Peter Brimelow, and also, by Scotch-Irish Vietnam veteran James Webb, Sleeping With The Enemy, American Enterprise, April 30, 2003, for how the Democrats threw the war when they took over Congress, post-Watergate..