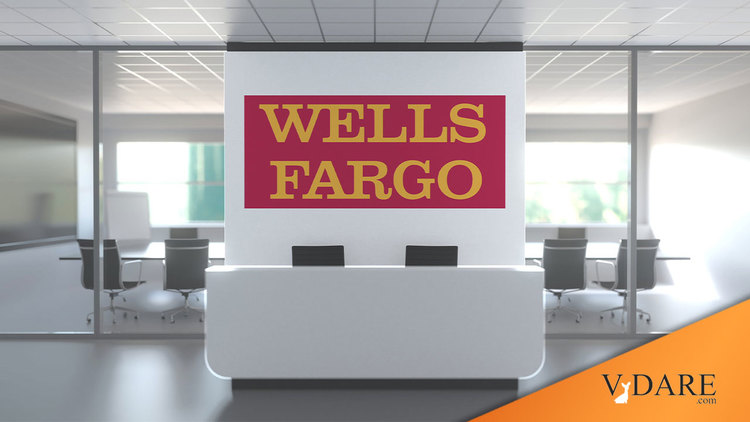 From: A Texas Reader [Email him]

A former Wells Fargo executive says he was fired for flagging alleged fake job interviews with minorities to his superiors.

A former executive at Wells Fargo bank is claiming that the company held "fake" job interviews for minority candidates for positions that had already been filled and says he was fired for bringing attention to the matter.

Joe Bruno, a former executive in the wealth management division at Wells Fargo’s corporate offices in Jacksonville, Florida, told the New York Times that the company would interview minority candidates for positions to adhere to an informal policy promoting diversity but noticed that the candidates were often interviewing for jobs that had been promised to someone else.

The Hell with Wells Fargo.

I worked for Wells for a few months, several years ago.

The branch manager where I worked was a white male. This was the Dallas area.

My sales manager was an Indian affirmative action beneficiary. The majority of his clients were natives of India.

The other sales manager in the office was another affirmative action beneficiary, this one a Vietnamese female.

Both were worthless as “managers” but both benefited greatly because of their race.

Wells Fargo and other consumer finance outfits—banks, credit unions, mortgage companies, etc.—go out of their way to hire racial minorities. They do so because of the Community Reinvestment Act.  In fact, the head of Wells’ mortgage group, a Harvard alumnus with an MBA in finance from UT Austin, sent out a worried missive one day. Apparently, Wells had round afoul of some racist metric, and was in danger of being punished by one of the farcical “regulatory” agencies in Washington, D.C. So, Wells had to double down on “investments” in the ‘hood and barrio in order to remain in the good graces of the regulators.

As for that branch office, it closed not long after I left. Wells Fargo is so big, so bureaucratic and so slothful, that it simply could not make money with this branch office. So, it was closed.